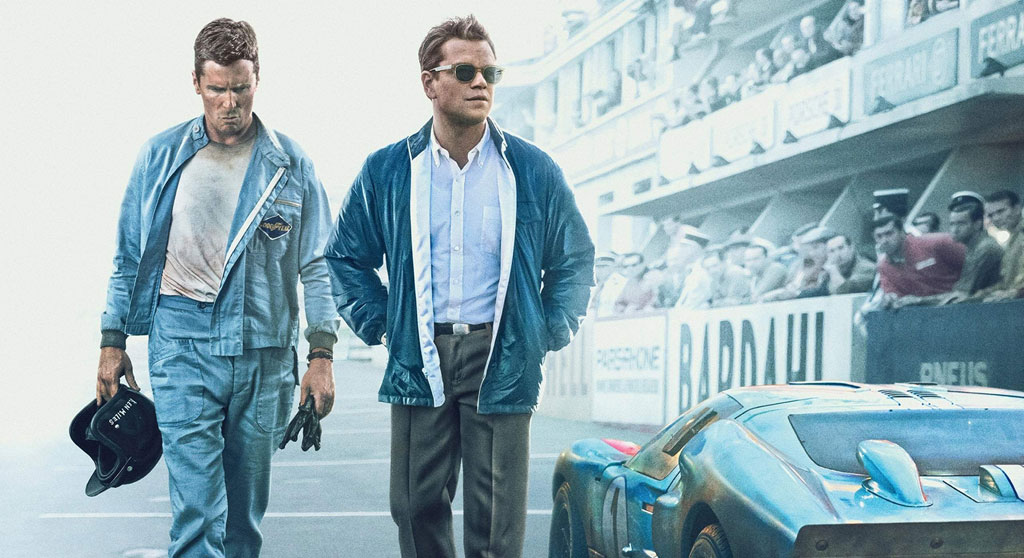 Friendship and faith abound in this take on the fast and furious arms race between an automotive giant and chic auto boutique on the boot of Italy. Back in the late ’50s, Carroll Shelby won the grueling Le Mans 24-hour auto race, something few Americans up to that point had ever done, as the race had long been dominated by Team Ferrari. After winning Le Mans, Shelby (Matt Damon) is informed of a cardiovascular condition that will prevent him from racing while Ford, the mega conglomerate, is looking for ideas to jump-start the brand. The automaker’s upper echelon, painted as a collection of stiff, square suits, has recently kicked off the Mustang line – thanks to Lee Iacocca, played by Jon Bernthal – but wants to appeal hipper to the blossoming Boomer generation by taking down the glamorous and glorious Ferrari team at the French-hosted, daylong drive fest. For the cause, and for a lean and efficient approach, Ford taps the maverick Shelby to build car and team. 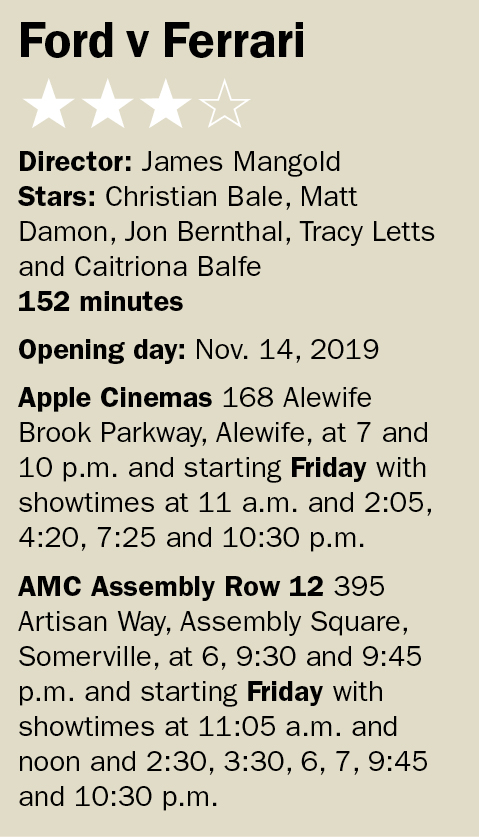 Based on true events, “Ford v Ferrari” revs across the finish line mostly because of the yin and yang relationship between the affable Shelby and his driver, Ken Miles (Christian Bale), and the external pressures put on them by Ford. Ken’s a hothead and a family man, and both he and Shelby face crushing financial pressures – over at shop Shelby, the renowned race car driver sells the same sleek collector’s item to multiple buyers on the same given day, with the mantra “Get the check but don’t let them drive away with it.” Extreme auto wonks Shelby and Miles go about their work with innate knowhow, lightening and quickening the car – Ford loads the initial GT with a clunky computer for diagnostics, which Miles unceremoniously rips out and opts for scotch tape and yarn to determine drag. As it turns out, it’s Ford that’s the film’s biggest villain with higher-up Leo Beebe (Josh Lucas, nailing the smarminess) a creepy control freak sharking around who wants Miles out (he’s not a Ford man) and Shelby to bow to him on every decision. Even more telling is Ford’s botched acquisition of Ferrari (viva la Fiat!) and the overbearing, near Trumpian portrait of Beebe’s boss, CEO Henry Ford II (Tracy Letts).

Directed serviceably by James Mangold (“Logan” and “Girl, Interrupted”) “Ford v Ferrari” marks one of the better (not that there’s a bevy) of recent racing flicks. It’s akin to Ron Howard’s surprising “Rush” back in 2013 as it careens along the roadway of friendship and rivalry at top speed. The race scenes and era are recreated impeccably, but “Ford v Ferrari” goes on a bit too long (two and a half hours) for its own good. Damon’s game thinker and Bale’s mercurial Brit carry the film from start to finish with a juicy contribution from Letts (the scene in which Shelby takes Ford II for a spin in the GT40 is priceless, though a bit over the top) and a more somber and uplifting turn from Caitriona Balfe as Miles’ wife, Mollie. Bernthal’s Iacocca, however, feels a bit lost as the film seems to wrestle with the icon’s legacy and complicity in Ford II’s tyrannical leadership. I’m sure the scion’s family and the current corporate brass at the automaker may have different takes; as told, the division from within proves the biggest obstacle to job No. 1.