‘Lady Bird’: She’ll make it hard as possible on herself to become who she wants to be 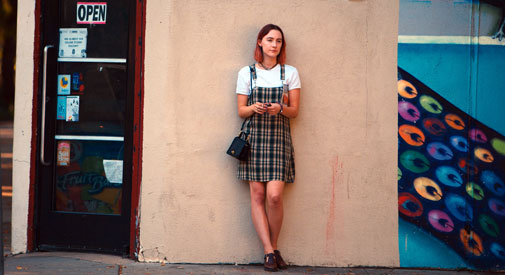 ‘Lady Bird’: She’ll make it hard as possible on herself to become who she wants to be

Greta Gerwig, the mumblecore queen who scored a breakthrough performance in Noah Baumbach’s Woody Allen-esque “Frances Ha” (2102) gets behind the lens for this semi-autobiographical reflection about a girl coming of age in Sacramento in the early 2000s. If there’s any question about how true to the bird it is, Gerwig is in her early thirties – would have been a senior in high school then, grew up in in Sacramento and attended a Catholic school, just like protagonist Christine McPherson (Saoirse Ronan), aka the “Lady Bird” of the title, struggling to find the right boy to surrender her virginity to and the funds to go to college. 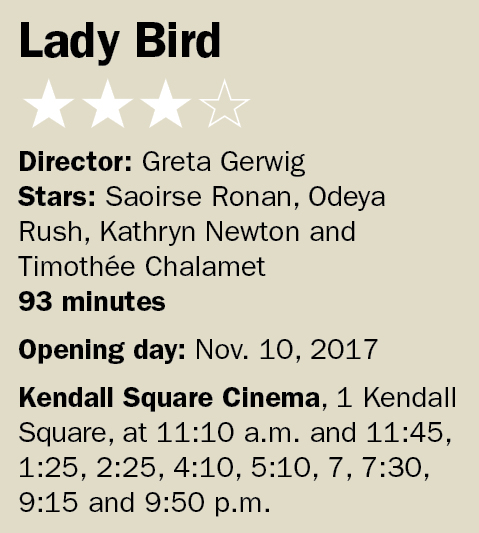 The intimate nature of the film (Gerwig also writes, but does not appear) builds in subtle yet palpable strokes with a devilishly barbed edge as it tackles the mandatory rites of senior year: prom, sex and college acceptance. One of the many angles that makes Christine such an intriguing character study isn’t so much her sass with a dash of surly, or red-shocked (dyed) locks that give her a tint of goth-punk, but the fact she’s a perpetual outsider, not religious and not well off, going to a parochial school and running in circles of affluence while dad (an endearing Tracy Letts), an outdated computer programmer, can’t land a job and mom (Laurie Metcalf, giving the best mom performance of the year behind Allison Janney in “I,Tonya”) hold the house together with stoic tough love.

In short, Christine is in a continually uphill battle – part of it her own obstinance – and along the way makes some provocative (and questionable) choices, be it the dumping of her weight-challenged best friend (Beanie Feldstein) for the popular rich girl (Odeya Rush) or her choices in men, the nice guy who’s too nice (Lucas Hedges, so good in “Manchester by the Sea”) and the cool hipster (Timothée Chalamet) about as deep as his veneer.

Many are hailing this as Gerwig’s directorial debut, though she has a co-directorial credit with mumblecore stalwart Joe Swanberg on “Nights and Weekends” (2008). She’s also worked on several projects with Baumbach and has clearly been a keen observer of technique and orchestration. The result is quite mature and astute for such a nascent filmmaker, but is it groundbreaking? No – let us not forget Orson Welles pumping out “Citizen Kane” at 24 – but it is fresh and has a bite that feels different even while treading in the same pool as other fine female coming-of-age efforts in the recent past – ”Palo Alto” (2013) and the more accomplished “Diary of a Teenage Girl.” Gerwig seems focused and intent behind the camera, which plays against her usual screen presence as pleasantly generic quirky waif.

The real score for Gerwig and the film, however, is the casting of Ronan, a highly accomplished and capable actress who, in her early twenties, has been up for an Academy Award twice already (“Atonement” and “Brooklyn”). There’s never a moment on the screen that you don’t feel and believe every tic and motivation running through Christine’s veins. It’s seems so natural and fluent, you don’t think of it as acting. But don’t be fooled; it’s one of the year’s best performances.

“Lady Bird” is the kind of indie film like such recent hits “Moonlight” or “Boyhood” that possess mainstream crossover and critical appeal. It should also position Gerwig and Ronan as A-listers, able to call their own shots.