‘Midsommar’: Hands-on anthropology studies reveal how dark it can get under midnight sun

‘Midsommar’: Hands-on anthropology studies reveal how dark it can get under midnight sun

As a kid I went to this Danish town north of Los Angeles called Solvang where it was Christmas year-round and the waffles were extra large and strangely exotic, and everyone dressed like they were from “The Sound of Music.” I tell you this because Solvang reminds me so much of the Swedish commune where four Americans wind up for a nine-day fertility festival “Midsommar,” the thrilling new chiller from Ari Aster. Everything’s so old school Lapland you half expect to see the Ricola folk or Max Von Sydow among the elders welcoming the group. 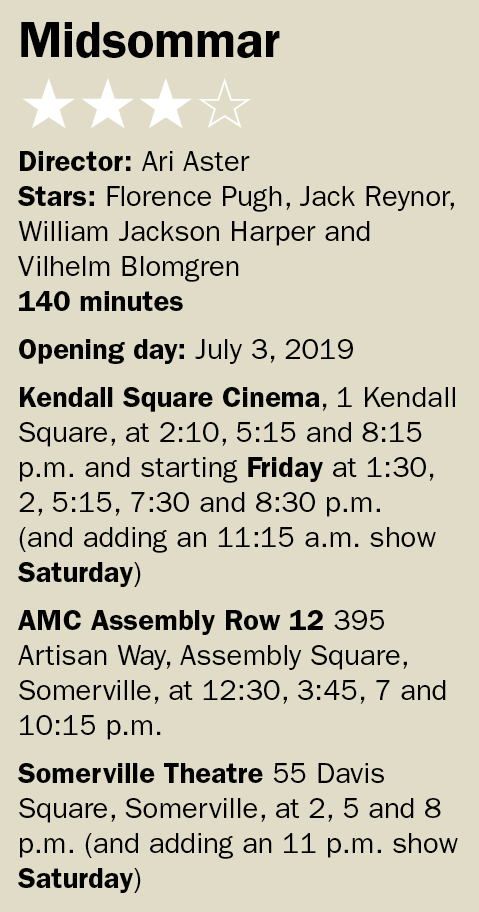 Two of the four Americans dropping in – Josh (William Jackson Harper, TV’s “The Good Place”) and Christian (Jack Reynor, the poor person’s Chris Platt) – are anthropology grad students, and the midnight sun rites are fodder for their theses. It helps that stateside buddy Pelle (Vilhelm Blongren) is from the remote village that feels like pieces borrowed from the sets of M. Night Shyamalan’s “The Village” and Robert Eggers’ “The Witch” with a bit of Ikea retrofitting tossed in. Rounding out the U.S. crew is loudmouth Mark (Will Poulter, the dirty cop in Kathryn Bigelow’s “Detroit”) and Dani (Florence Pugh, “Lady Macbeth”), Christian’s girlfriend and a tag-along whom the other lads in the posse aren’t so keen about.

The film begins and ends with Dani. There’s a prolonged opening about her clinginess to Christian, her bipolar sister and a family tragedy that would send anyone to therapy in double time– a hauntingly fraught meander worthy of Paul Thomas Anderson. Once up in the Swedish enclave, Dani freaks out on organic hallucinogens, Pelle clearly has eyes for her and the age-old cult ordains her as the dark horse in the May Queen dance-off.

Early on in the anthropological exploration—which doesn’t feel so scientific or methodical—we get a glimmer into just how dark this eternal summer day can get. Once you’re 72 in the commune, you’re ready for renewal, which has something to do with a swan dive onto a stone pallet or a wedding reception line of celebrants wielding a medieval mallet. It’s not easy to drink in, but it’s when Aster – who played on audiences’ sense of comfort and composure with the equally grim “Hereditary” – lets us know shit just got real. The American scholars, as smart as the allegedly are, don’t take note of such omens, even as their ranks thin. But when things begin to feel a bit “Wicker Man” predictable, Aster focuses on the fractured dynamic between Christian and Dani, and the choices the characters make are telling.

The final scene, just as with the reveal of the fate of Dani’s family, is gorgeously framed and flawlessly choreographed. It’s not everyone’s cup of tea, to be sure, but Aster has again put a new, gory bow on a genre we know too well. If you can make it to the end, you’ll walk out on edge and agape.