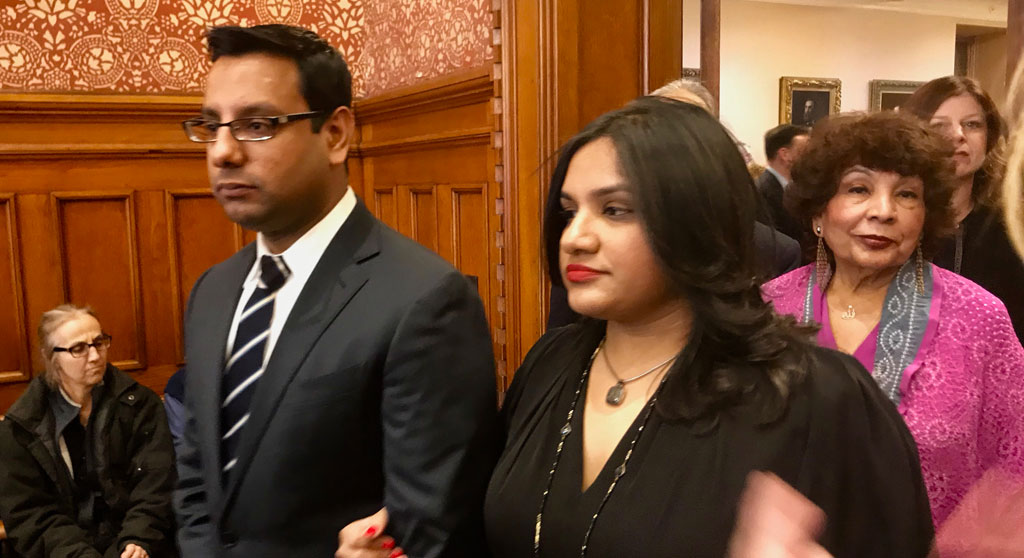 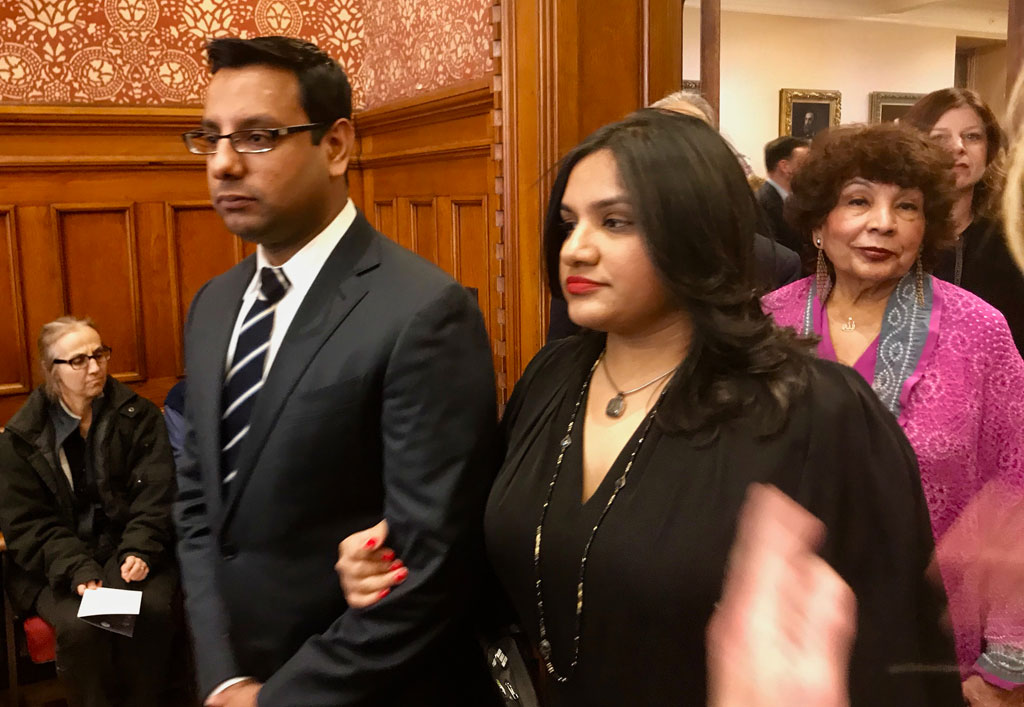 For the fourth term in a row, the City Council elected a mayor and vice mayor – Sumbul Siddiqui and Alanna Mallon, respectively – at its inaugural meeting, held Monday at City Hall.

Siddiqui is the first Muslim mayor in Massachusetts, and having two women leading the city has also been described as a first.

Both leaders used their inaugural speeches to praise the value of public service, and to describe their work as being exactly that. 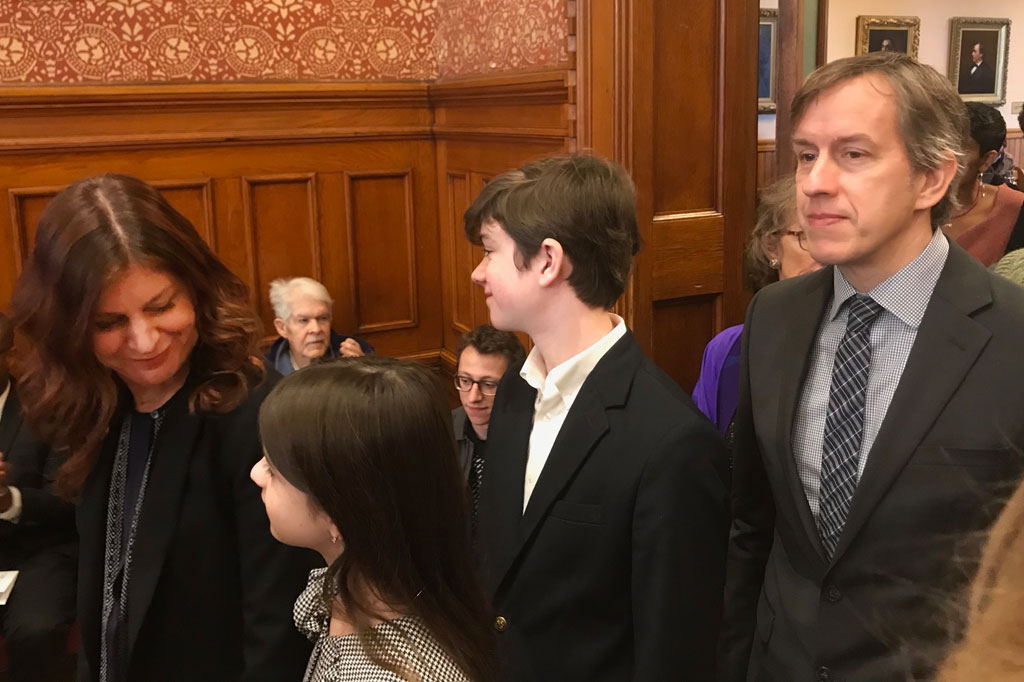 “People ask what I do and I tell them I’m a public servant. Public service has defined my life,” Siddiqui said upon accepting the mayor’s chair, telling of her parents’ struggles as immigrants to provide for their family by working minimum wage jobs but finding help from neighbors – just as Siddiqui found help from teachers and guidance counselors at Cambridge Public Schools. “Service is second nature in Cambridge. My goal as mayor will be to uphold that tradition.”

Mallon began her speech honoring Siddiqui and underlined the mayor’s message, saying that despite Cambridge’s claims to greatness in higher education and technological innovation and the council’s occasional “lofty” forays into national politics, “especially when passions run high, [we will remember] this job is truly about public service.”

The trend of quick mayoral elections relies on between-term backroom politicking to get the council working swiftly, according to insiders who have been through the process, to avoid the kind of legislative inertia seen in years such as  2010 and 2012. Mayoral elections took up to 10 ballots in those years (and, in 2012, required a special Wednesday meeting to resolve things) and lasted well into February, delaying the appointing of committee leaders and therefore slowing the hammering out of complex or controversial ordinances before being heard by the full council. The mayor also leads the six-member School Committee.

From the public’s perspective, Sumbul and Mallon were elected unanimously on their respective first ballots after a ceremony in which city clerk Anthony Wilson delivered the oath of office to each councillor.

But the easy election was signaled last week, when past term mayor Marc McGovern threw his support to Siddiqui, praising her work in the past term and also a belief “that as our city and schools continue to address issues of race in our community, having a mayor who can see these issues through a personal lens … will be vitally important.” The school district and especially the high school has been riven by racial controversies in recent years; School Committee member Emily Dexter said in December that she was opting out of serving her third term as the result of a race-related issue, despite winning reelection easily a month earlier.

Résumé on race, other issues

Facing issues of racism and bias in public institutions got a prominent nod in Siddiqui’s speech Monday, along with persistent problems such as affordable housing and the school system’s academic achievement gap. “I know we can make progress in what seems like intractable challenges,” she said.

And in telling her family’s story as immigrants from Pakistan finding a home in the United States, she said, “Thank goodness that place was Cambridge, a city that continues to welcome immigrants from around the world.” (Cambridge had a previous muslim councillor in Nadeem Mazen, who served two terms from 2014 to 2018.)

Among Siddiqui’s most prominent stands in the past term was her role in advancing development of East Cambridge’s former courthouse. In September, Siddiqui cast the deciding vote on granting parking spots needed for reuse of the structure, extracting more than the expected level of concessions out of developer Leggat McCall Properties: a doubling of affordable housing units to 48; a reduction in the number of parking spots requested; and another $3.5 million for the Affordable Housing Trust, for a total of $8 million.

And Siddiqui, as a Cambridge native who grew up in public housing, attended Cambridge Public Schools and worked as lawyer for the low-income and elderly, has also been popular at the polls. She was the only councillor elected in the first round of ranked-choice voting in November elections, surpassing quota with 2,516 No. 1 votes; that was a repeat of her feat from two years earlier, when she was the second-highest vote getter behind E. Denise Simmons and beat quota with 2,532 No. 1 votes.

In the past, when the council has felt divided on major issues, the mayor and vice mayor have come from what could be roughly defined as different sides – such as the past term’s McGovern and Jan Devereux, who often voted apart on development issues.

But Siddiqui and Mallon are closely aligned, and Mallon on Monday referred to Siddiqui as her “sister.” Once Siddiqui became the obvious choice for mayor, Mallon accompanying her was all but predetermined, insiders said.

Mallon joined the council alongside Siddiqui, and the two remained close over the first time, linked in the public’s mind by partnering on hosting the “Women Are Here” podcast released through Cambridge Community Television. She became prominent in Cambridge first by founding a Cambridge Weekend Backpack Program that sent food home with more than 500 low-income students every weekend. That led to her hiring as education liaison to then-mayor David Maher. More recently, she has been prominent in trying to preserving Cambridge’s arts community.

They will lead a council with two new members: Patty Nolan, who served on the School Committee for 14 years before winning a council seat on her first try; and newcomer Jivan Sobrinho-Wheeler. The five returning councillors with Siddiqui and Mallon are Dennis Carlone and McGovern, each entering their fourth terms; Simmons, in her 10th term; Tim Toomey, in his 16th term; and Quinton Zondervan, in his second term. (Jan Devereux, vice mayor in her second term, decided not to run for reelection; Craig Kelley lost his seat in a tight race with Sobrinho-Wheeler at the end of his seventh term.)

The term before them is fraught not only with the issue of race, but will see the likely return of an affordable housing overlay zoning concept tabled quietly last year after intense and intractable disagreement; a need to grapple with a city manager contract and potentially the running of a nationwide search process; amending and approving the Envision Cambridge master planning process; and a continued draining of the arts community exemplified by Harvard’s plan to move its theater stages to Allston.