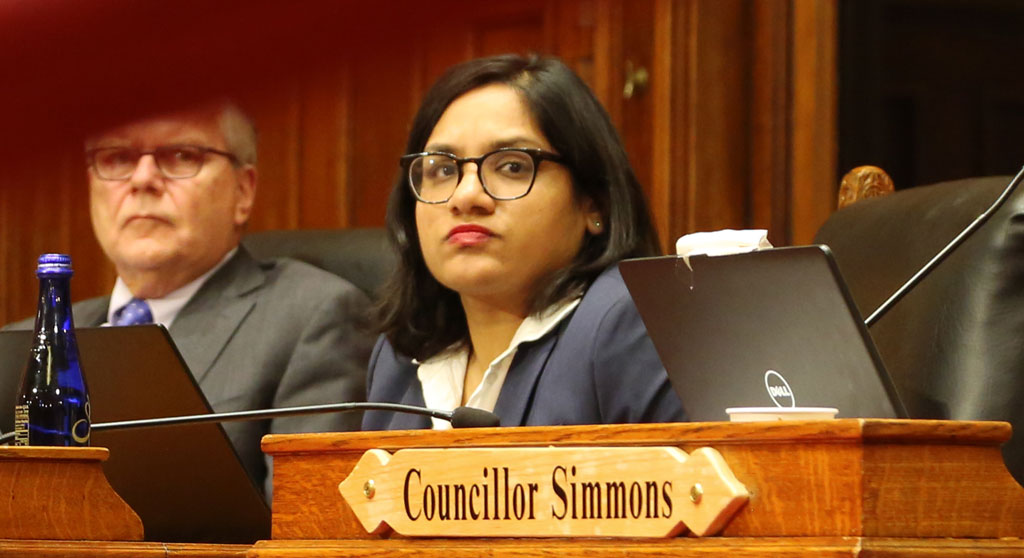 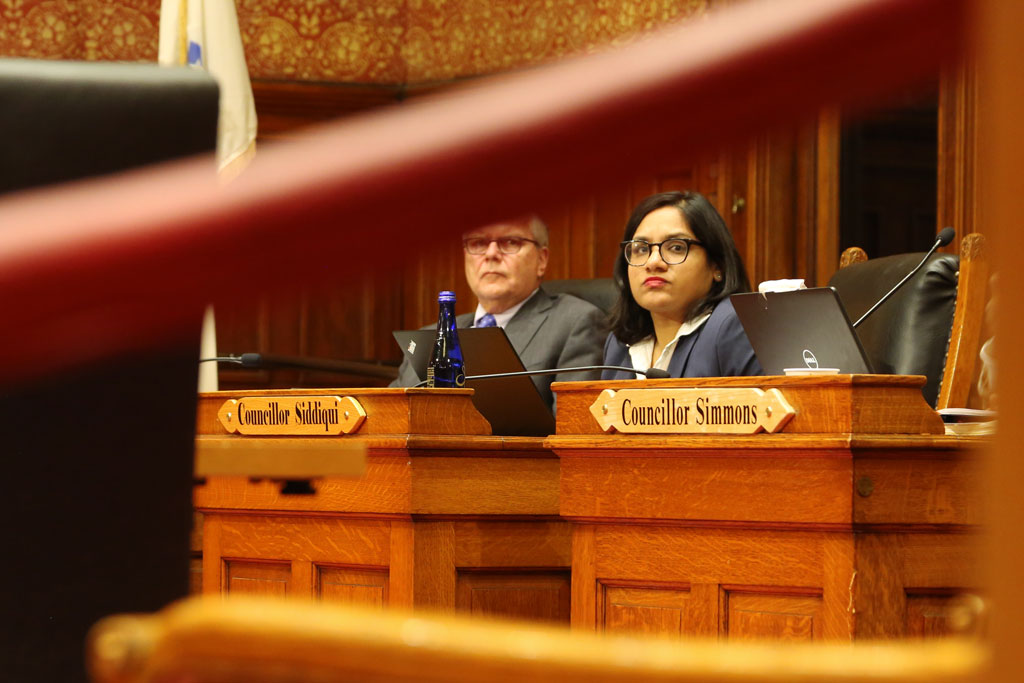 Recognizing her power as the deciding vote on granting parking spots needed for reuse of East Cambridge’s former courthouse, on Wednesday city councillor Sumbul Siddiqui extracted further concessions out of developer Leggat McCall Properties: a doubling of affordable housing units to 48; a reduction in the number of parking spots requested; and another $3.5 million for the Affordable Housing Trust, for a total of $8 million.

The surprise proposal came toward the end of a special council hearing, continued from Monday when it reached the five-hour mark mainly by taking public comment from around 100 people on both sides of the issue. With Siddiqui’s “contingencies” agreed to by the developer, she became the crucial vote in a 6-3 majority – if Leggat McCall hadn’t agreed, she may yet have joined with vice mayor Jan Devereux and councillors Dennis Carlone and Quinton Zondervan as a fourth vote blocking the parking disposition at the city-owned First Street Garage.

“I know I’ve disappointed people,” Siddiqui said. “I know I’m letting a few people down either way. But I’ve spent many weeks and many months thinking about this.” 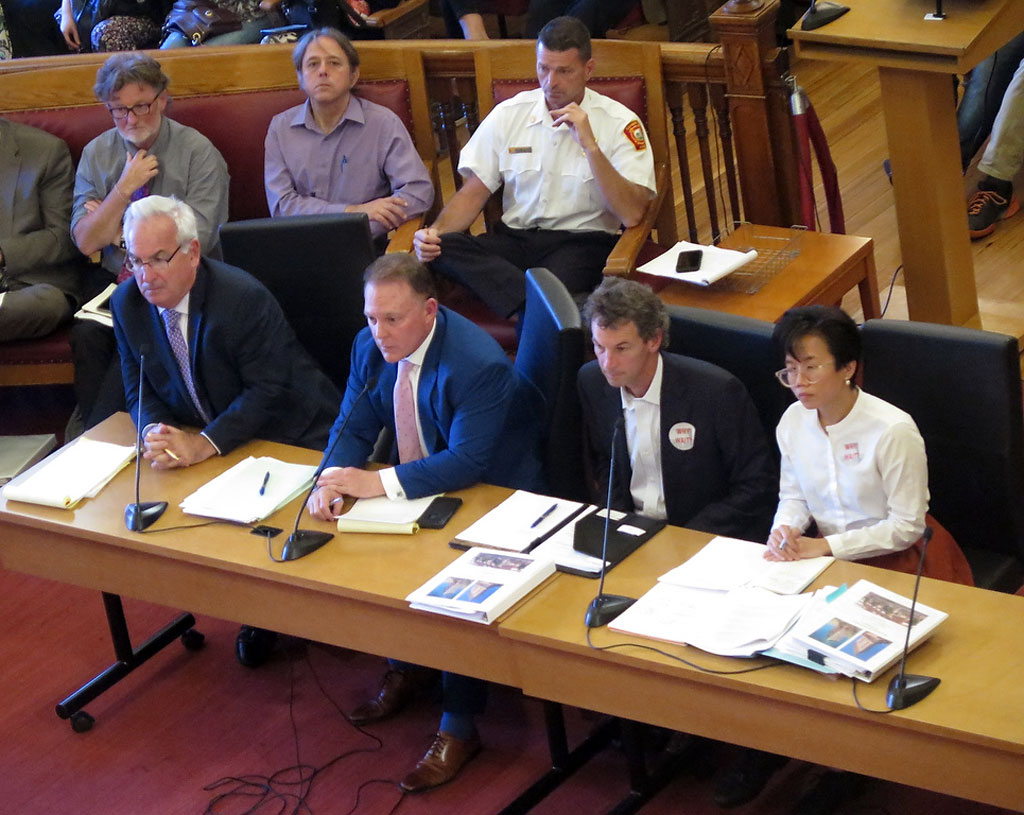 A “no” vote from Siddiqui would have upended a plan in place since December 2012, when the state named Leggat McCall the winning bid to redevelop the 20-story Edward J. Sullivan Courthouse at 40 Thorndike St.

Opponents of the project hoped to see the land kept in the hands of the public as housing – ideally as all affordable housing – built to a scale that fit better into the neighborhood.

The building has been empty since June 2014, and deteriorating under the watch of the state Division of Capital Asset Management and Maintenance to the point that residents living nearby have worried about their health. A lawsuit and appeal, and then a battle over the parking disposition, delayed work at the courthouse by the developer. Just Tuesday Leggat McCall had received a one-year extension on its special permit from Cambridge’s Planning Board; the company has also had to make renewals of its purchase and sale agreement with the state. Rob Dickey, an LMP executive vice president, said Wednesday that the building had cost it around $10 million without even breaking ground.

The company bid $33 million for the property and says remediation of the building – which was began emptying starting in 2008 because it was riddled with asbestos – could cost $50 million. Dickey said Sept. 5 that LMP had made no requests of the state to maintain the property against deterioration, and had never recalculated its 2012 bid to see if the deal still made financial sense.

The nearly seven-year delay saw a continued surge in the value of office space, a fact Siddiqui confirmed with Leggat McCall and its attorneys at the hearing before making her proposal: that being able to charge higher office rents meant the company could still profit by subtracting office space to add affordable housing, and even by upping its contribution to the Affordable Housing Trust.

“As you said, the market is hot, and I think this is a reasonable request,” Siddiqui said. “This is what I would need for a yes vote.”

While a parking reduction of 125 spaces had already been proposed by Leggat McCall, she asked for even more spaces to be given back to the city – amounting to an additional 25, in line with the new affordable units – and for a good faith effort by the company to fulfill a promise for child care by finding a local nonprofit to run it, instead of a pricey chain.

Devereux, rolling with Siddiqui’s unexpected dealmaking, asked for a timeline on seeing the retail space transformed into the public uses, but Anthony Galluccio, an attorney for Leggat McCall, dodged by pointing out the complexity of dual construction sites – the courthouse and garage are on separate but adjacent blocks – with potentially separate building permitting processes.

Zondervan, meanwhile, objected to an immediate vote on a radical change to a long-standing proposal that members of the public hadn’t been able to comment on. It was a “fair question” on an “unusual” process, Mayor Marc McGovern said, but it’s not unusual to see radical, last-minute amendments to special permits and giant “planned unit developments” in Cambridge.

Leggat McCall must now go to the Planning Board to seek approval on changes to its special permit in line with Siddiqui’s deal. “Time is of the essence,” Galluccio said, while Dickey said that the company was “committed to move this forward as quickly as possible, including the amendments to the special permit and including the physical condition of the building.”

Despite Zondervan’s objections, the question remained before the council, with Siddiqui’s amendments accepted 6-3, followed by passage of the amended order at the same 6-3 split.

Backers of the courthouse project were ebullient afterward. Henry Wortis, a Berkshire Street resident opposed to the project, called the new affordable units “24 fig leaves” and nodded to the amount of profit Leggat McCall must expect to make there: Losing 24,000 square feet of office space and paying an additional $3.5 million to the Affordable Housing Trust “didn’t bother them at all,” Wortis said.