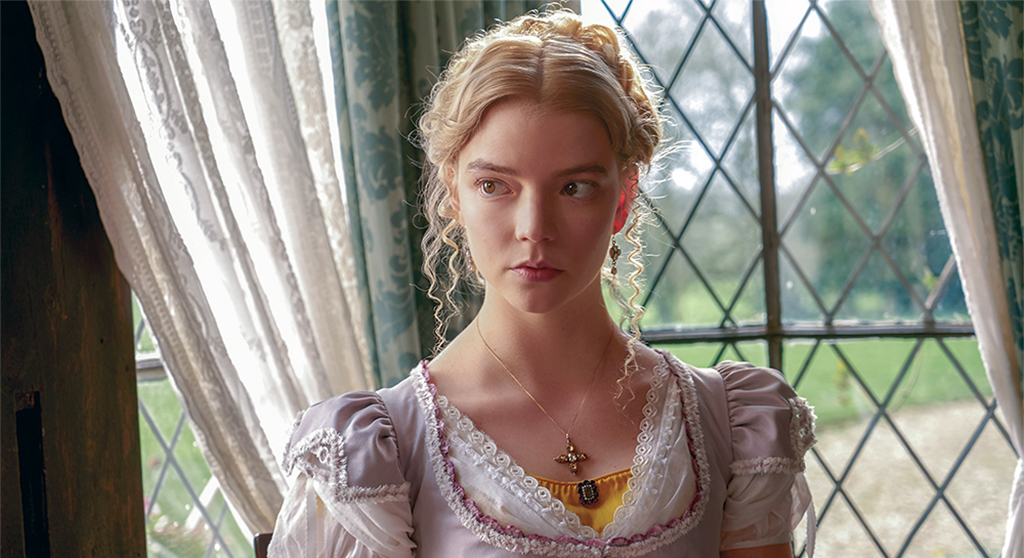 I always find it curious that “Emma” was the last novel Jane Austen wrote before her passing. “Pride and Prejudice” and “Sense and Sensibility” always felt more mature, wise and insightful. They’re also less gleeful and spry. 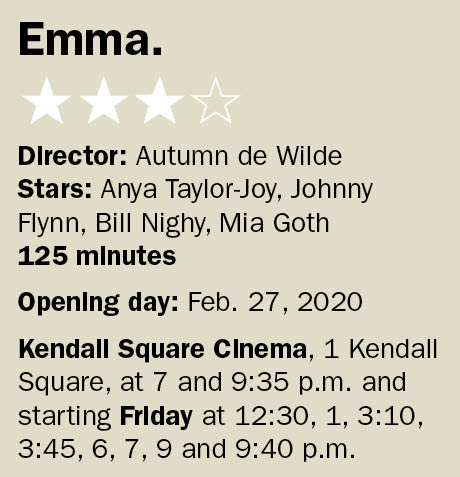 It’s important to note that the title of the film by Autumn de Wilde, tackling Austen in her feature debut, is “Emma.” with a period at the end of the title. One might think it’s to not to be confused with the 1996 version staring Gwyneth Paltrow, or maybe to simply inform cinema-goers that this is the definitive celluloid (well, digital) version – period! However you take it, de Wilde’s vision of 19th century English countryside is a rich one, rooted in details, period dress and the title character’s ever alluring array of earrings. One astute detail is the use of folding panel draft screens, each a piece of period art in their own right, positioned by the help to keep their wealthy estate owners warm as they relax in the living room gabbing and imbibing a cordial or, more mundanely, reading. In one scene, Emma (Anya Taylor-Joy) instructs the helping hands to move two such panels to exact locations to keep her father (the indomitable Bill Nighy) warm. The hyper (draft) sensitive effete is certainly snug and happy, but what Emma has more intentionally done is create space for her and her next-door neighbor (fields and sculpted gardens away), the overly solemn Mr. Knightley (Johnny Flynn), to whisper privately about affairs of the heart.

Emma, it turns out, is a master manipulator, ever so prim on the outside but inside scripting the love lives of the young and unsuspecting roaming the quaint confines of the bucolic burg just a day’s jaunt from London. Those caught up in her matchmaking, besides Knightley, are her tag-along of lower social station, Harriet (a wonderful Mia Goth), a sensitive, hardworking farmer with a square jaw by the name of Robert Martin (Connor Swindells), the prideful world traveler Frank Churchill (Callum Turner) and Emma’s de facto social rival, Jane Fairfax (Amber Anderson). Most of Emma’s semi-well-intentioned plots (most with a modicum of personal gain attached) backfire with a dour muffled cough. Nothing in Austen’s very staid land ever erupts outwardly, though Flynn’s brooding Knightley feels like a bull in a narrow stall looking to explode. It’s a Heath Ledger-esque performance, understated yet thoroughly compelling. (Interestingly, Flynn in is slated to play rockers David Bowie and Ray Davies in upcoming projects.)

It’s hard to pick a shining star in de Wilde’s opulent period piece. Goth, Nighy and Miranda Hart as Miss Bates, a nonstop chatterbox as sweet as she is annoying, all add perfect bits of garnish to the Knightley-Emma Woodhouse tug-of-war of emotion and desire. Mark one thing: “Emma.” lifts Taylor-Joy over the top as a serious young performer in the ranks of Thomasin McKenzie (“Leave No Trace,” “Jojo Rabbit”) and Saoirse Ronan (“Lady Bird,” “Little Women”). Coincidentally, the name of her occult young woman in her breakthrough, Robert Egger’s “The Witch” (2015), was Thomasin, and she’ll star this year with McKenzie in the Edgar Wright (“Baby Driver,” Shaun of the Dead”) project “Last Night in Soho.” And as much as Joy-Taylor lifts the film with her ebullient, wide eyes that mask mixed feelings, credit for a work that feels like both a fairytale and a master painting goes to de Wilde – amazingly, at nearly 50, notching her first-time shot. The script by “The Luminaries” novelist Eleanor Catton, like Greta Gerwig’s “Little Women,” metes in just the right amount of modern female gaze without unsettling a single apple in Austen’s cart. Flynn and Taylor-Joy have their trajectories mapped, but it’s de Wilde (who got her detailed eye making videos for Beck and Jenny Lewis) that’s the eye-opener here, and the new hot one to watch.