‘Once Upon a Time … in Hollywood’: Stardom loses some luster in dusty, bloody wilds of L.A. 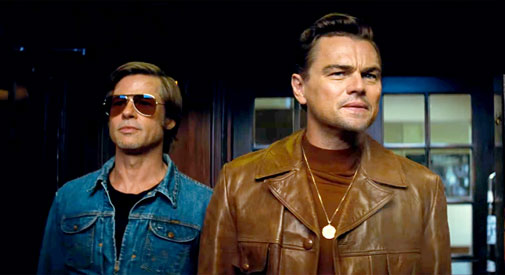 ‘Once Upon a Time … in Hollywood’: Stardom loses some luster in dusty, bloody wilds of L.A.

Quentin Tarantino’s “Once Upon a Time … in Hollywood” isn’t a rescripting of historical events the way “Inglourious Basterds” (2009) envisioned the Nazis toppled by a handful of hard-hitting Jews, but there are definitely some major ripples in time. No, “Hollywood” is more a tongue-in-check, kick-in-the-pants modern fairytale with a hefty side of cinematic homage; it rambles some, to be sure, but it’s more sincere and genuine in execution than the video store clerk-turned-auteur’s last outing, “The Hateful Eight” (2015). It may be Tarantino’s most personal and intimate film to date (tying with “Jackie Brown” on the latter) as the director talks about tapping out after 10 films – which this would be if “Four Rooms” counts, but I digress. 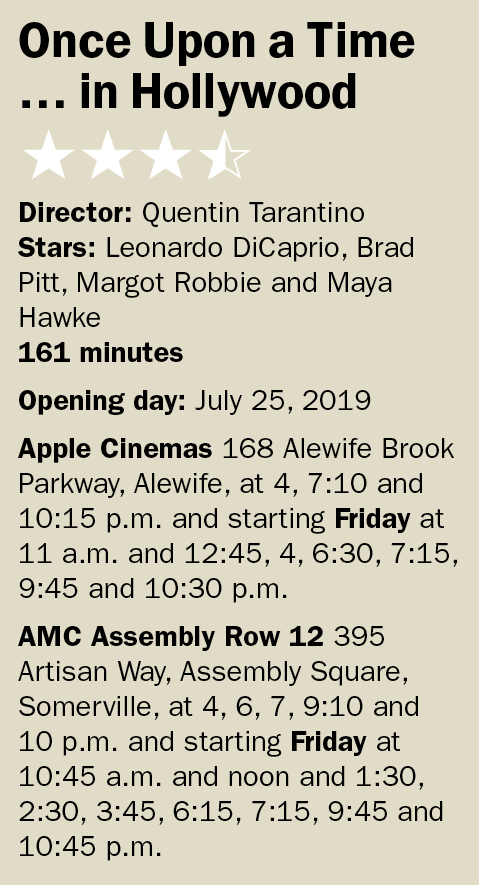 The setting is the late 1960s. Rick Dalton (Leonardo DiCaprio), something of a Clint Eastwood or Chuck Connors, came to fame in a fictional hit television western called “Bounty Law” a decade earlier and now finds it hard to get lead work – he plays mostly heavies on (real) shows such as “The F.B.I.” and “Lancer.” Front and center too is Dalton’s shadow and heyday stunt double Cliff Booth (Brad Pitt), a smooth, angular chap with an aw-shucks facade and a deeply dark side that gets leveraged to glorious and disturbing effect. Because the two are loyal bros, Dalton, during his downward fade, employs Booth as driver and gofer. Dalton also lives next door to Sharon Tate and Roman Polanski – and, yes, on the eve of the Manson family murders – and in a separate silo we get Margot Robbie as an ebullient Ms. Tate looking grand and fabulous as she dances poolside at a Playboy mansion gig and taking in a screening of “The Wrecking Crew,” which she stars in with Dean Martin.  (At the box office, she asks if she can get a free pass, because she’s in it.) Robbie may not say much, but she’s intoxicating in every scene she’s in. Doomed in real life as a Manson victim, Tate is held up by Tarantino as the essence of a sunsetting era.

At nearly three hours, the film never feels long – meandering, perhaps, but you always know there’s gold just over the next horizon, be it Damian Lewis’ uncanny deadpan portrayal of the king of cool himself, Steve McQueen (at that Playboy party), or Booth as a stunt minor on a Bruce Lee project, going toe-to-toe with the legend. There’s a lot to relish Booth’s cool, “Sure, let’s do this,” and Mike Moh aping the emerging Kung Fu star’s lingo and mannerisms with “Be Like Water” perfection. DiCaprio, however, notches the highest thespian peak of all as Dalton, in a long take on the set of “Lancer,” falters with his lines and struggles to get back in character – it’s subtle, but a master class scene, and one where the genius might not hit you until the credits have rolled and the haunting resonance of the film has you reflecting.

The most chilling thread – as you might imagine – has to do with the merry Manson clan. Booth, in his crisscrossing of the city, runs continuously into a comely Manson cultist with the apt summer of love moniker Pussycat (Margaret Qualley, who should experience career lift after this and “The Nice Guys”). Their flirtation across busy streets is both cooly hip and erotic, and when she gets into Dalton’s Caddy and Booth gives her a ride out to the Spahn Ranch (where the Manson faithful gathered for real, if you needed the history lesson, and – as Tarantino’s narrative has it – where “Bounty Law” was shot) the heat index of the film goes up twofold. Every line is tinder with a match. Bruce Dern, subbing in for Burt Reynolds, who passed as the project was taking form, provides a deliciously cantankerous turn as old man Spahn.

How the episodic epic ends may be a bit too neat and hyperbolic for its own good. It doesn’t jump the shark, but there will be much ado about it. (On the subject, I will say no more.) The real success of the film is the indelibly palpable chemistry between Pitt and DiCaprio. It’s Newman-Redford good, and while I’m not sure that was something Tarantino was angling for, it’s interesting to note that as chronologically “Hollywood” ends, “Butch Cassidy and the Sundance Kid” is just coming out. The casting overall is brilliant, with spot-on Jack Rabbit Slim emulations of icons from the era and just the right amount of of quirk. Pitt and DiCaprio should see their names listed on year-end best slates, as should crew involved in set and costume designs – the scope of which amazes when you step back and think about recreating a city that has changed so much in 50 years. The other true amazement is a shirtless Pitt who, at age 55, still looks like the model for Michelangelo’s “David.” And then there’s Booth’s obedient chestnut pit bull, Brandy, who collected the Palm Dog at Cannes earlier this year and might be even more ripped. From Manson to Mad Magazine, as well as Tarantino’s long-running embrace of the spaghetti western (and so much more) as well as “The Valley of the Giants,” there’s a lot packed in. At some junctures it feels overindulgent, but this is Tarantino doing what Tarantino does. It’s a gonzo love letter to the movies that soars on the loyalty and friendship of two B-listers. Helter Skelter be damned.