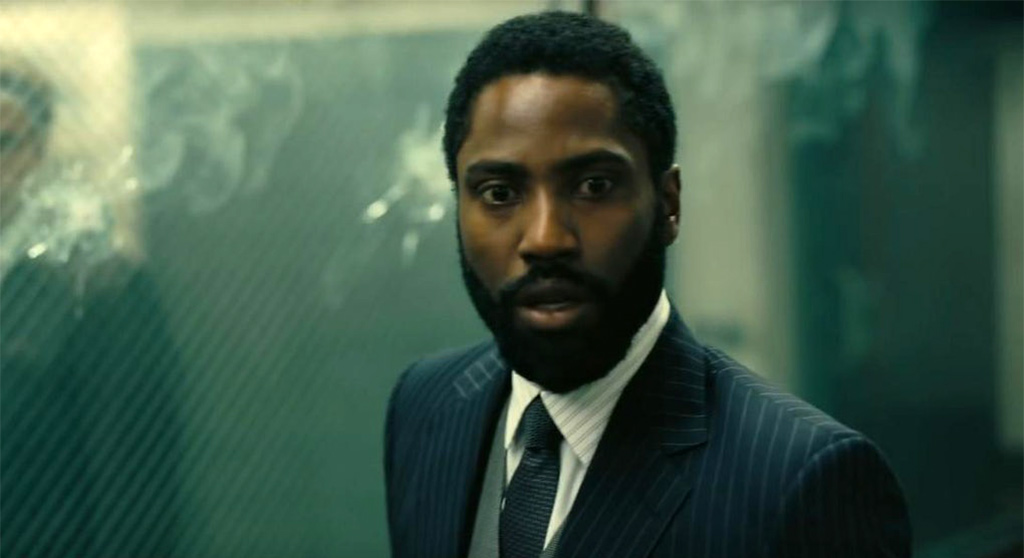 Well, I did it: I went to a theater and saw “Tenet.” Would I recommend you to? That’s a personal call. For me it didn’t feel too risky, but read on. I attended a 4 p.m. show at Landmark’s Kendall Square Cinema. I bought my ticket online, but still had to wait in line to show the usher behind a plexiglass shield my emailed barcode and get a printed ticket. I saw only three other people at the theater, all folks asking for senior discounts – in short, those in high-risk categories but clearly desperate for an in-theater experience, as was I. Landmark offered no snacks, and masks had to be worn 100 percent of the time. Every two seats in the theaters are blocked off, and management asks you to sit in alternating rows – something, I did not need to worry about. I was the only person at my screening. (Apple Cinemas near Fresh Pond and Alewife is showing it too, since reopening Friday.)

This being a Christopher Nolan film, seeing it on a big screen is kind of a must – in the very least for the imposing, driving score (by Ludwig Göransson, though it feels and sounds a lot like Hans Zimmer’s work on Nolan’s 2010 “Inception”) and the impressive camera work by Hoyte Van Hoytema, Oscar-nominated for Nolan’s WWII time scramble, “Dunkirk” (2017). Playing with time and space is Nolan’s thing; he did it with “Memento” (2000) to tell a murder mystery in reverse, and “Interstellar” (2012) as space travelers who go through a black hole where decades of Earth time pass in minute. Here time is imbued into objects sent back from the future. Sounds zany, right? It’s one of the things you just let wash over you, because no matter how hard Nolan and his characters try to explain, you feel like you’re just not getting it. The best I can do is that you can rewind history and insert yourself into the action – in essence, altering the future – but the catch is everyone else is moving in reverse while you’re going forward. People walk backward, cars go in reverse, and bullets get sucked back into their gun.

To try to explain the concepts behind “Tenet” more would be akin to writing a scientific essay about an Escher drawing. The title refers to a covert organization that recruits a CIA operative (John David Washington) to essentially stop World War III. “Nuclear holocaust?” someone asks, and the answer has to do with time warps and our future sending things back to the past to manipulate outcomes – one of which is global annihilation. To thwart things, Washington’s operative, known as “The Protagonist,” hurtles from Mumbai to Oslo and ultimately for a battle royale in an abandoned city in Siberia, pausing for a spectacular siege of Ukraine’s Kyiv opera house. Pairing up with Washington for the Mumbai caper is a smooth operator by the name of Neil (Robert Pattinson) who swills Bombay martinis before scaling the urban fortress of a notorious arms dealer. Adding to the bigger picture is Kenneth Branagh’s heavy, Andrei Sator, an arms dealer who pretty much holds the keys to everything, and his estranged wife Katherine (Elizabeth Debicki), whom he keeps on a short rope by holding their young son as anguish bait.

Overall the film’s best moments are that opera siege and a multilayered security vault heist in the heart of the Oslo airport (jumbo jets are involved), and they come early. Later, as the film settles into a triangulated conflict between Washington’s protagonist, Andrei and Katherine with the world in the balance, the film begins to sag – it’s like a Bond film without the fun, because you’re thinking constantly instead of just rolling with the great stunt work and massive scope Nolan sets before you. It’s edgy for sure, and that constant thinking keeps you in the game when a film with a lesser-developed high concept or lesser talent behind the lens would lose you. The real weak part here is the lack of character. Branagh is compelling, but his Andrei is nothing more than a wolf in wolf’s clothing. Washington too, who was so essential to Spike Lee’s “BlacKkKlansman” (2018), has swagger, but feels stiff and hollow – there is no branding on the role. It’s Pattinson and Debicki’s characters who bristle with conflict and nuance. Pattinson, since his “Twilight” days, has been immersed in dark, character-driven fare (“Good Time,” “High Life”), and it shows here in his freelance operative, who may have other marching orders. Debicki, one of the pluses in Steve McQueen’s all-woman caper, “Widows” (2018), again shines as the suppressed wife looking for a way out – but not without her son. Her plight is the realest thing in the movie; for the rest, it’s kill or be killed. Nolan’s other films, “Memento,” “Inception” and “Interstellar” to tag a few, had real human drama at the epicenter, but here it’s on the fringe.

Nolan’s film was screened for the press only in theaters and is showing to the public that way, with no streaming options, something that made many critics cry foul with Covid concerns. Interestingly in this moment, when his characters are “inverted” (moving forward in the backward-moving past) they must wear masks to stay alive – granted, oxygen masks, but still. The thing that’s certain when you walk out of “Tenet” is that your brain will be abuzz with questions about history and reengineering the past. You might even consider the film more on point if it were about using time to stop a pandemic, not a madman in possession of an apocalyptic algorithm. Or maybe, to that point, what if you could dial it back to 2016?