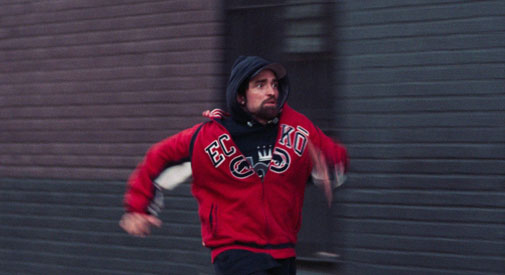 It’s “Rain Man” meets “Eddie Coyle” in this up-in-your-chest New York City heist flick. The film, by Boston University grads Benny and Josh Safdie, is imbued with the type of on-the-street grit that made Martin Scorsese’s “Mean Streets” so indelible, and the riveting electric score by Daniel Lopatin notches up the emotional disarray in every frame. If there’s one thing “Good Time” is not, is short on mood. The setup bookends the central narrative with scenes of a baby-faced young man by the name of Nick (played convincingly by Benny Safdie, doing double duty) under duress while in therapy sessions with a wild-haired psychiatrist (Peter Verby, whose face is a cinematic wonder in its own right). In the opener, Nick’s asked to give free association responses to random terms. His answers to “scissors and a cooking pan” (“You can hurt yourself with both”) and “salt and water” (“The beach”) are telling – not in the actual response, but how he responds. He clearly has some form of developmental handicap. 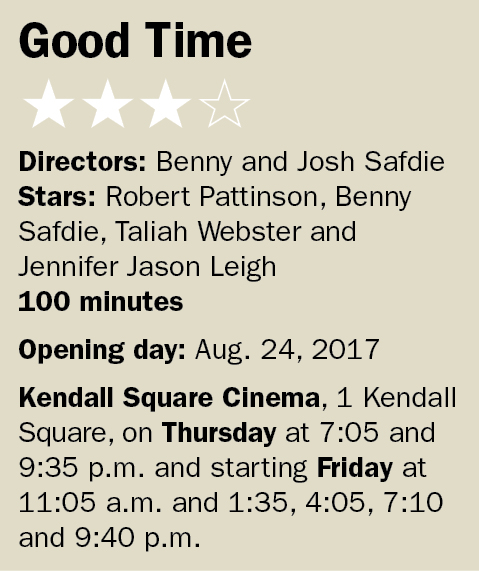 The scene smolders in tight closeups, but before the grim gravity of Nick’s prospects can take root fully – or the psychiatrist can dig any deeper – Nick’s brother Connie (Robert Pattinson) bursts through the door and extracts his sibling. Has Nick been saved? For the moment, yes, but not in the bigger scheme of things. The two are incredibly tight (the Safdies are clearly drawing on their own sibling bond) but pretty much have only each other to draw on and limited financial resources; to keep the pack together, Connie cooks up a plan to rob a bank in the middle of the day, the execution and choreography of which is so hauntingly reminiscent of “Dog Day Afternoon” you half expect Al Pacino to pop out with chants of “Attica.” The lads do make off with the cash, but matters with ride sharing, dye packs and Nick’s emotional instability provide steep obstacles. It’s a riveting game of cat and mouse as the brothers dash down littered alleyways and into a mall atrium with the police a hot breath away. Just as they look to be in the clear, Nick crashes through a glass pane and is taken into custody. Where the story goes next is as unpredictable as its protagonist.

Connie may be blessed with all his mental faculties, but he’s no Danny Ocean. The take from the heist is too dirty and hot to be worth enough to make Nick’s bail, so Connie tries to tap his girlfriend (Jennifer Jason Leigh, perfect in the desperate part) for the money. The problem isn’t so much her reluctance but that she lives with her mother, who knows Connie all too well and cancels credit cards before they make it to the bail bondsman. Meanwhile, Nick gets beaten to a pulp among the general population and is taken to a hospital, where he’s mummified in gauze. Connie’s Plan B becomes to extract his brother from the emergency ward despite a police detail posted outside the room.

To say things go sideways would be an understatement. A lot happens during the course of the very long evening – Connie creepily invites himself into the house of an immigrant woman he meets at the hospital, helps himself to hair dye and plants a kiss on her 16-year-old granddaughter so she doesn’t see his mug flashed across the TV. Later, he cuddles on a bed with an attack dog as a means of protection during a drug deal involving a soda bottle full of LSD he scored during an amusement park break-in. In short, most of Connie’s schemes explode in his face, and violently so, but you have to admire the drive even if you’re repulsed by the lows he’ll go to to keep the ball in the air.

Pattinson, best known for his “Twilight” turns as a vegan vampire, plays against type here and shows more of the range hinted at in “The Lost City of Z” and David Cronenberg’s “Cosmopolis.” Much is asked of him and he delivers, making the near amoral street scum empathetic and complex – of course having a special needs brother in his charge provides an immediate emotional tug, but Pattinson and the Safdies work to make it genuine, smartly avoiding the usual maudlin trappings that come with such territory. The performances all around buoy the film, and Safdie regular Buddy Duress, who feels as if he waltzed in from a Tarantino picture, lights up the screen as a just-out-of jail dope name Ray who – and I didn’t think it possible – is more brash and hapless than Connie. The high-energy recount of his release and the booze- and drug-addled shenanigans that ensue marks some sharp, flashy filmmaking that enthralls increasingly with each turn of the downward spiral.

Connie and Nick don incredibly realistic looking latex masks of black men for the heist. Later, Connie takes down an African-American amusement park security guard (Barkhad Abdi, so good in “Captain Phillips”) and leaves him bound and drugged for the arriving police to take the fall. It sticks out enough to make you wonder: Is Connie playing on the racism abundant in society today? Or is he just a random opportunist or, worse, a racist? If it’s the latter, there’s no prior indication, and by the time we get to that debacle we know Connie’s just not that sharp – so perhaps the Safdies are simply holding up the mirror?

If the title seems somewhat misplaced, it’s sheer irony. There’s literally no good time to be had by anyone on screen, except maybe in the exaltation of having scored the money – and that lasts a few fleeting seconds. The characters then fall from one self-induced shit show to the next, their mounting misery our uncomfortable enjoyment.