‘BlacKkKlansman’: True story of infiltration that hardly has to sneak in a modern message 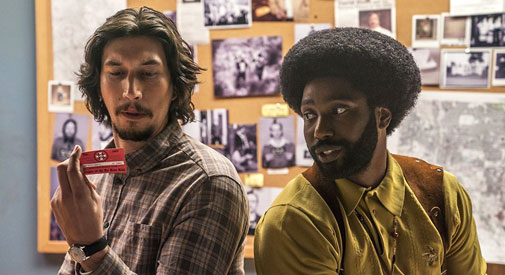 ‘BlacKkKlansman’: True story of infiltration that hardly has to sneak in a modern message

If someone told you there’d be a movie about a black man who infiltrated the Ku Klux Klan, you’d probably call BS. I mean, how could that ever be? But what if the infiltrator were Jewish? You’d likely double down on your BS card – after all, these are the two bloodlines that drive the rallying hate of the white knights whose mission has been to keep America pure and white. 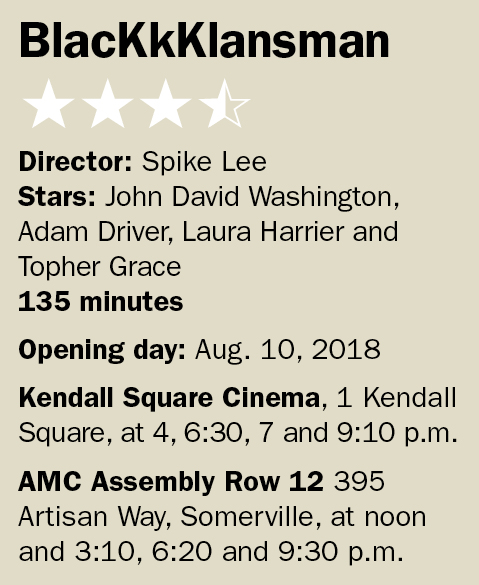 Of course, the latest from Spike Lee, “BlacKkKlansman” is based on a true story and proof reality trumps “that’s impossible.” It’s not as crazy as you might think, but pretty wild nonetheless, as an idealistic African-American during the Nixon era signs onto a Colorado Springs police force that’s on a diversity push. Ron Stallworth (John David Washington, Denzel’s son, sporting a perfectly shaped Afro that almost becomes its own character) is its first, and because of his complexion proves perfect for undercover work, blending in a crowd at a rally lead by a former Black Panther at the local college – and later on the phone, talking to the local chapter of the KKK. That’s where the film really finds its groove and bite. Watching Stallworth talk in proper vernacular, dropping the “N” word with convincing hateful spirit, is not only sheer music to the KKK leader on the line (Ryan Eggold), but caustically cringeworthy good fun for the audience lapping up the irony.

Through such means Stallworth learns of activities beyond just cross burnings – but how to attend meetings? He turns to a white fellow officer to play Ron Stallworth in the flesh. That officer, Philip “Flip” Zimmerman (Adam Driver) happens to be Jewish; at Klan meetups he’s hounded by the group’s hair-trigger pit bull Felix (Finnish actor Jasper Pääkkönen, who snarls through and steals nearly every scene he’s in), who has an extra burning hate for Jews. He’s onto Flip/Ron from the drop and demands a lie detector test at gunpoint and visual proof of a circumcised penis – then there’s the brilliantly scripted Holocaust denial exchange.

The film, written by Lee and a team of writers working from Stallworth’s book, embraces irony as an art form, ever raising the stakes and taking it to the next level. Just when you think things couldn’t fold in any more, Stallworth, eager to get his KKK card so Ron/Flip can go to official/ceremonial events and get a robe, picks up the phone and dials the mothership to see what’s taking so long. Who do you think answers? None other than grand wizard David Duke himself (Topher Grace, bringing wit, humor and more humanity to the role than one might expect). The two form a bestie bond via Ma Bell.

One of the most effective things Lee does here as a director is to take his foot off the social-agenda gas. Sure there’s plenty of “black power” chants in “BlacKKKlansman,” but it’s measured and part of the scene. The film makes its points solely on the merit of the action. There’s nothing didactic or forced as we drink in the racist universe through Stallworth’s eyes. It’s also one of Lee’s most thoroughly entertaining works. The cast and the crisp dialogue fire with purpose and fervor in every lushly staged frame (by cinematographer Chayse Irvin). Playing a hate monger making an (anti) PSA for like-minded supremacists, Alec Baldwin is nearly as intoxicating as he was in “Glengarry Glen Ross,” and Corey Hawkins (Dr. Dre in “Straight Outta Compton”) owns the screen for his five minutes of blistering “rise up and rebel against racism” speech as Kwame Ture, that former Panther who whips up the college’s black student assembly. In broader roles, the underappreciated Robert John Burke is steely eyes and square as Stallworth’s police chief, and Laura Harrier is both fiery and free-spirited as Stallworth’s potential love interest and leader of the black student union.

If there’s one haunting aspect to “BlacKKKlansman,” it’s that much of the KKK spittle spewed about taking America back – and keeping it pure – echoes eerily that of Donald Trump’s 2016 presidential campaign. It’s not simply by chance; in the end, Lee brings us back to the present, poetically and with punch and purpose, letting us know how far we have not come. It’s a sad realization, but a riveting look inward getting there.