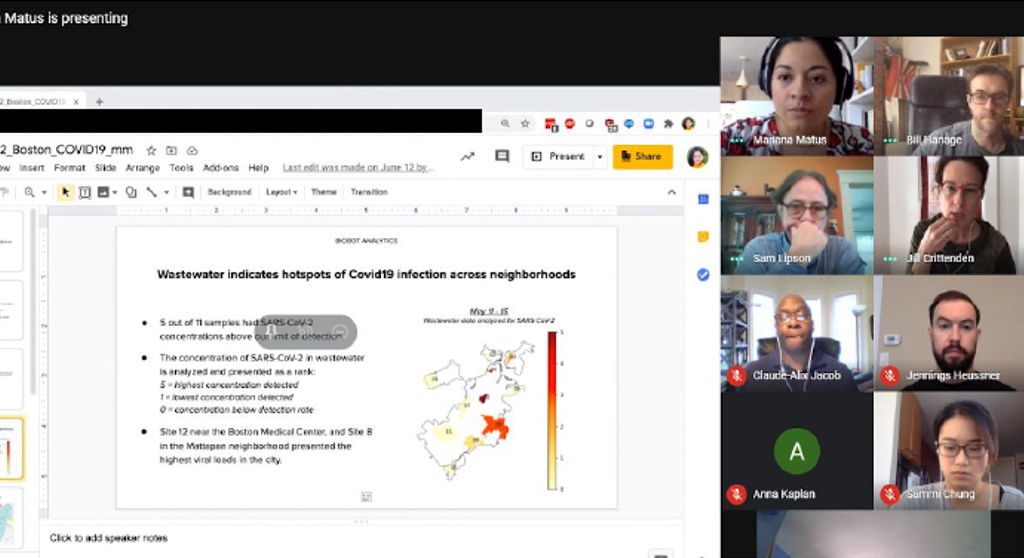 A screen capture from a city coronavirus Expert Advisory Panel meeting was included in Aug. 20 notes posted by the city.

The city named eight people in March to a panel of experts to advise officials how best to respond to Covid-19 locally. Yet the administration hasn’t carried out many of the panel’s recommendations and doesn’t appear to have asked for advice when it said it did. Three of the eight panel members attended meetings rarely or never, while two other people were not appointed but often participated, and several others sometimes came to the sessions.

The city has posted agendas for 18 meetings from March 24 to Sept. 23, but minutes for only 13 of them. City administration spokesman Lee Gianetti did not respond to questions about the missing minutes, the city’s response to or failure to ask for advice, and the discrepancy between appointees and participants. Gianetti also didn’t say whether the city will continue to post agendas and meeting notes.

The notes that are available also disclose facts about the virus’ transmission and impact here that health officials have not divulged. For example, the Cambridge Health Alliance has found that transmission in households accounts for much of the spread, while the public health department has seen clusters in unnamed businesses and laboratories. Two people living at the YMCA “passed away without accessing care,” notes of the May 5 meeting say. It was not clear whether they had Covid-19 or some other serious illness that wasn’t treated because of the pandemic. The YMCA provides rooms to low-income men.

Household transmission of the virus worried the advisory group more than most other issues. The panel wanted the city to establish housing where healthy workers could stay to protect themselves from an infected family member. The request echoed fruitless efforts by some city councillors to set up hotel rooms where homeless people could live alone, and it brought the same result: no action by the city.

Advisers also pressed for more testing of household contacts when someone in a family is infected, proposing at the panel’s June 2 meeting that the city perform the tests as part of a study of the impact. A week later, Chief Public Health Officer Claude Jacob said the city lacked the capacity.

Many residents have been frustrated by not being able to schedule a coronavirus test, and City Manager Louis A. DePasquale and Jacob revealed Sept. 29 that they’d left it unpublicized that residents could simply walk up and be tested immediately without one. In explaining why, DePasquale said, “We have had discussions probably 10 to 15 times since this happened about should we or shouldn’t we announce the walk-up capability? And it seems at this point in time, the consensus was to keep the appointments and if people walk up, serve them, but not make that public. We’re still in discussions … it’s something we talk about a lot.” Though he did not specify who the “we” was, DePasquale and Jacob had referred to the work of the advisory panel several times during the meeting.

No such discussions could be found in the advisory panel agendas and notes made available by the city.

Among the recommendations the panel made that weren’t adopted was one to prohibit indoor restaurant dining. The group also questioned the city’s mask orders, including asking in July that stronger measures on indoor mask-wearing be imposed; the city didn’t act on this issue until Oct. 1. But there is no record of input on the city’s changing rules for masks worn outdoors, beyond questions on why local rules differed from state and federal guidance.

Another issue, closing Memorial Drive to cars, pitted a majority of city councillors, who wanted more space for pedestrians and cyclists, against DePasquale and Jacob, who said they worried about crowds and safety. A section had traditionally been closed to cars but opened to walkers and cyclists on Sundays every summer. At the April 13 meeting, one participant in advisory panel meetings, health department director of environmental health Sam Lipson, said the advisers thought opening “a few larger streets” next to big residential buildings to walkers and cyclists could work as a prelude to opening more smaller streets, as councillors also wanted. Lipson also said the panel favored making sidewalks one-way.

The minutes of the March 24 meeting and agenda for the April 7 meeting (for which there are no minutes provided) don’t contain any reference to Memorial Drive, street closings or one-way sidewalks.

The first mention of Memorial Drive in the panel’s minutes came May 5, when members were told that reopening it to pedestrians and cyclists was being considered. One, Jill Crittenden, a brain and cancer researcher, said she couldn’t recommend it “without better data” but it might be “educational” if it happened. Another, epidemiologist William Hanage, said people without masks should be barred. On May 19, when Jacob told panelists the drive would be opened the next two weekends, one asked whether authorities could set capacity limits and monitor crowd size.

Everything worked out, the group was told at its May 26 meeting, according to minutes; it wasn’t very crowded and people wore masks.

Told that the city golf course was to reopen, panel members recommended that players have their temperatures taken and that officials warn groups of players not to drive to the course in one car. The Fresh Pond course requires players to make appointments, wear masks and leave the parking lot promptly when they’re finished playing, but does not take players’ temperatures and has not issued warnings about groups traveling together in one vehicle.

At several meetings the panel has discussed monitoring infections by sampling sewage and has heard presentations from one company, Biobot, which monitors the virus at the Massachusetts Water Resources Authority’s Deer Island treatment facility. The city’s school system uses those readings as one trigger for opening or closing schools.

The treatment plant collects sewage from all of Eastern Massachusetts. The Expert Advisory Panel, in contrast, heard about how Biobot could pinpoint waste from sections of Cambridge or even long-term care facilities and senior public housing complexes to sample. Still, the discussions haven’t led to any recommendations, according to the minutes that are available. And so far, the city hasn’t taken any steps to sample wastewater here.

Meanwhile, Somerville is working with a Northeastern University professor who can test sewage, and its own engineering contractor, to set up a program that can target areas of the city. It was supposed to begin last month.

Sayah and Byers have not appeared in any available meeting notes, while Biddinger apparently attended only the first meeting on March 24. A number of other people have been mentioned in minutes, including Jacob and Lipson.