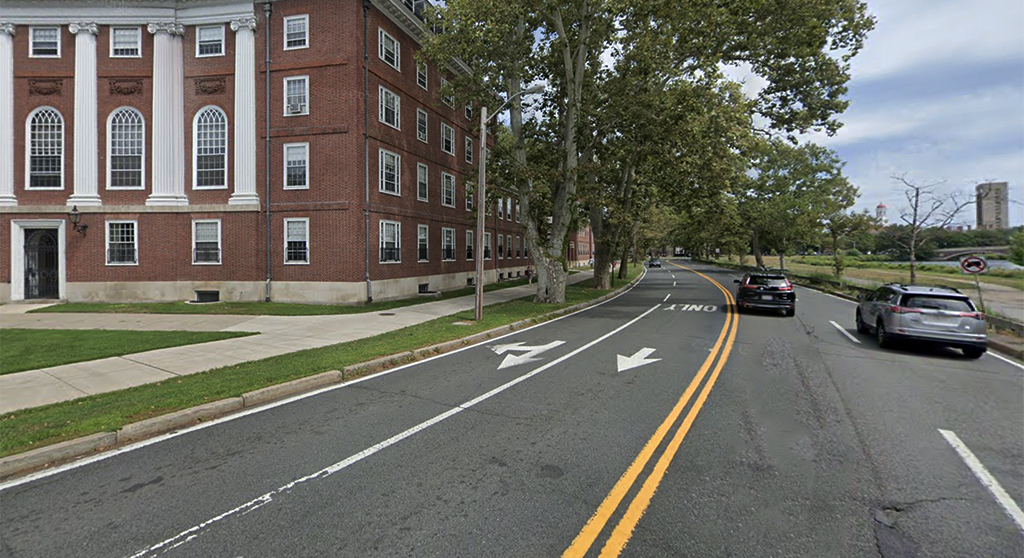 City councillors have asked that Memorial Drive be studied for closing to cars to make room for exercisers socially distancing during a coronavirus crisis. This photo has been retouched to remove a watermark. (Photo: Google)

The idea of closing Memorial Drive to cars to make more room for socially distanced exercise will go to the city manager for study, the City Council decided Monday, and all it took was three weeks of discussion, some 20 residents speaking in favor during public comment, cities nationwide providing examples to follow and support from the city’s panel of hand-picked local health experts and the the state Department of Conservation and Recreation.

A similar motion that would have closed some streets to cars throughout the city’s various neighborhoods, making room for people to walk and avoid potential coronavirus infection, was left on the table.

The actions were opposed by City Manager Louis A. DePasquale and his public health officer Claude Jacob, who said a week earlier that when you “close the streets, you run the risk of now having de facto block parties.” City councillor Tim Toomey, who remained a “no” vote Monday, had compared opening up streets to Miami Beach during spring break or New Orleans at Mardi Gras and said that if people want to get out for recreation, they should bring their children to “help distribute food to the seniors.”

Waiting until past the peak

But on Friday, Jacob’s department announced that “arranging for safe and responsible outdoor open space is critical to long-term physical and mental health of residents,” though any step should wait a couple of weeks until after Cambridge passed its expected peak of infection.

“Opening a few larger streets adjacent to larger residential buildings, where oversight of social distancing is more feasible, would be a sensible prelude to a wider street closures effort, provided the problem of social distancing isn’t made apparently worse by the initial closures,” said Sam Lipson, director of environmental health for the department, citing consensus among an eight-member Cambridge Covid-19 Expert Advisory Panel. The panel also endorsed a “one-way sidewalk” policy, he said.

The findings drew criticism in a posting by Yonah Freemark, a Massachusetts Institute of Technology urban studies doctoral candidate. “Rather than open streets for pedestrians, the City of Cambridge’s response right now is to address inadequate sidewalk space by encouraging pedestrians to only use the sidewalk in one direction,” Freemark said on Twitter. “People continue to get to drive however they like, but pedestrians get one-way sidewalks?”

Councillors Quinton Zondervan and Patty Nolan, sponsors of the Memorial Drive order with Mayor Sumbul Siddiqui and councillor Jivan Sobrinho-Wheeler, said their talks with state officials had only reinforced their feeling that it was smart to open Memorial Drive.

Nolan said she had asked about the test closing of streets in Watertown, Boston and Jamaica Plain. “I asked about the results of that and [a DCR official’s] words were that the results were ‘phenomenal.’ They had no problems. They had no complaints. This weekend’s weather was quite nice, and yet the streets were not overcrowded. There was not the gatherings that one might have worried about,” she said.

“I want to remind us all that we are not in lockdown. Some people may think we should be, but we are not, and that means people will be going out. This is simply about giving them more space,” Nolan said.

Aside from Boston, other places with roadways closing to nonessential car traffic during coronavirus distancing includes Cleveland and Denver and, as of last weekend Oakland, California.

The council orders were prone to misinterpretation from their introduction March 30, when councillor E. Denise Simmons used her “charter right” to keep both from immediate votes. One of her objections applied to only one of the orders, though.

“It does have a tinge of bias, because it talks about Memorial Drive and it talks about Brattle Street. We have a very large city. And other people probably might want the same privilege and opportunity to walk unfettered by traffic,” Simmons said. “My charter right gives [the makers of the motion] the opportunity to think about the implicit bias baked into this order.”

State-operated Memorial Drive, which stretches from West Cambridge to East Cambridge and touches on Riverside, Cambridgeport and Area II and closes only partially for Sundays from April to November, was mentioned in the order; Brattle Street was not. It is not clear how much of the roadway would be affected by the study – nor where Simmons got the impression Brattle Street was included. Simmons’ charter right also stopped the order that would close “streets in each neighborhood” to cars.

While the neighborhood order remains on the table – and the council does not meet again for anther two weeks – the Memorial Drive order has moved forward with a 5-3-1 vote, including approval from councillors Nolan, Sobrinho-Wheeler, Zondervan and Dennis Carlone and vice mayor Alanna Mallon; disapproval from councillors Simmons, Toomey and Marc McGovern; and a vote of “present” from Mayor Sumbul Siddiqui.