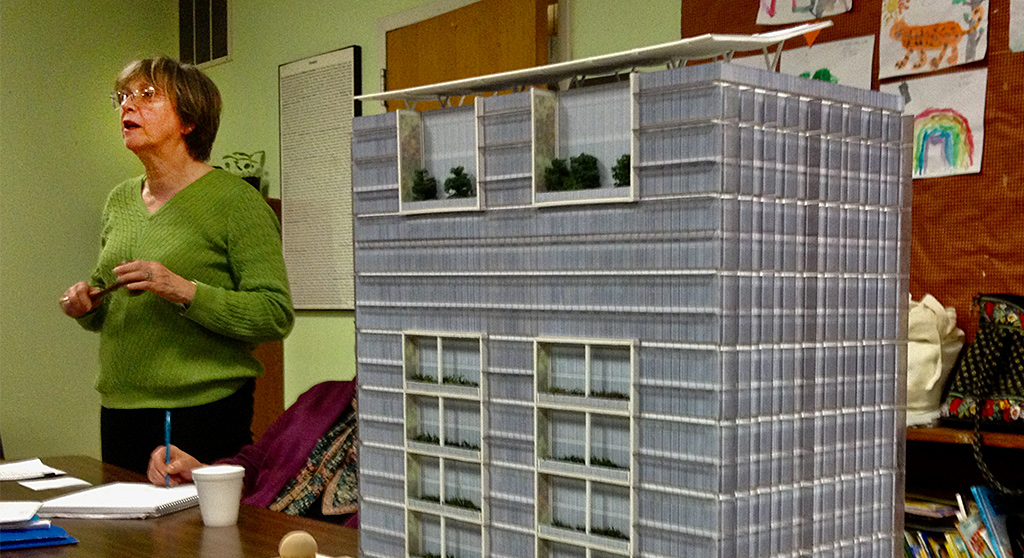 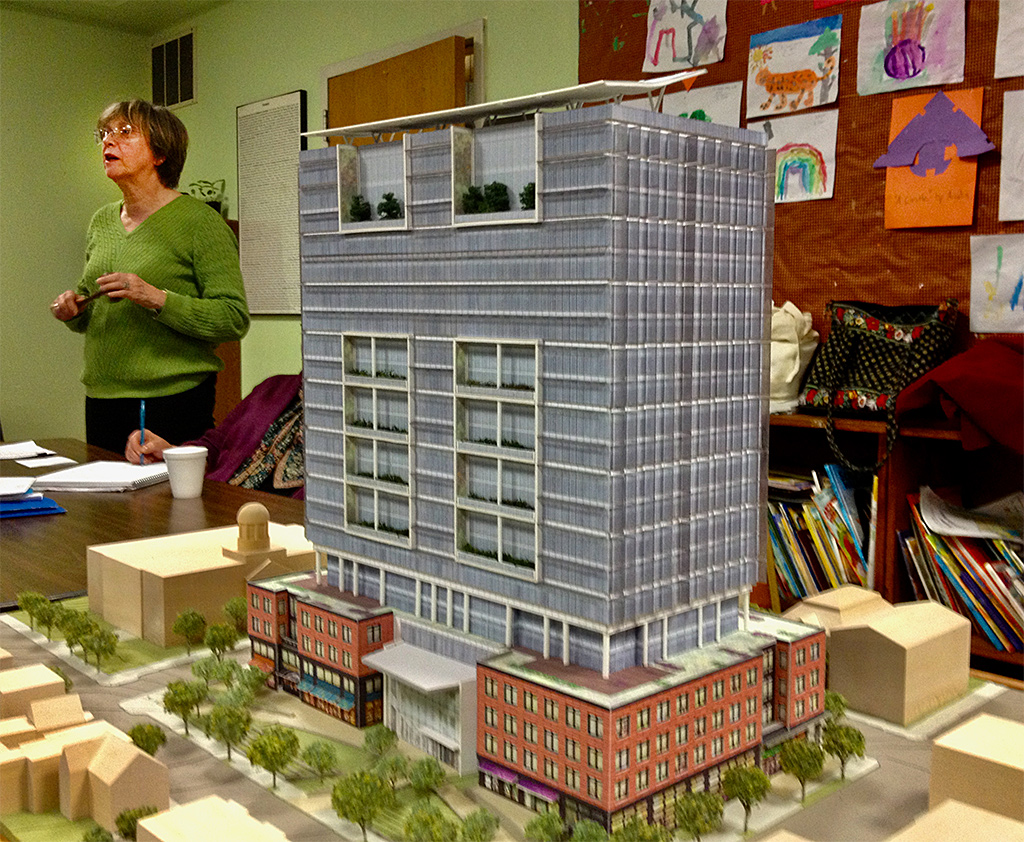 A City Council order Monday looks at neighborhood groups such as the East Cambridge Planning Team. Here, president in 2013 Barbara Broussard is shown with a model of a proposed courthouse redevelopment. (Photo: Marc Levy)

Looking at the next stages of pandemic response

Special City Council meeting, 3 to 5 p.m. Monday. The City Council welcomes health and science experts for a discussion on the expected trajectory of Covid-19. Televised and watchable by Zoom video conferencing.

City Council, 5:30 p.m. Monday. The cost of reopening schools adapted for coronavirus has been $16.3 million, and the School Committee has found $7 million of it – but is asking for the remaining $9.3 million from free cash to pay for health and safety mitigations, additional staff, technology and other costs; the council has to approve the transfer. This meeting will also see the return of items bumped by councillors from last week’s meeting. Those include whether parts of “Riverbend Park” – which is parts of Memorial Drive repurposed by closing them to traffic – will stay open for socially distanced exercise past Nov. 29, and whether more of Memorial Drive can be added; and for the city manager to consult with other leaders in Eastern Massachusetts about a regional shutdown of nonessential indoors activities with financial support for affected small businesses. (A replacement order is due to replace this one.)

While that order may bring a flurry of public comment from business owners, there’s potential for even more impassioned words over a call to “strengthen community bonds and ensure equitable access to neighborhood organizations,” where councillor Marc McGovern says some people trying to take part are made to feel unwelcome, resulting in neighborhood organizations that don’t fully represent their neighborhoods. While this order just sends the issue on to committee for discussion, McGovern offered reassurance Saturday that “I didn’t file this in an attempt to take the groups over”; there have been fears spoken that this is part of a strategy to weaken checks against development.

New business also includes a second take on a call for public art after plans for an installation honoring passage of the 19th Amendment were canceled because there wasn’t enough diversity among the artists considered. There’s also a call for an equity audit on Cambridge Arts, a branch of city government, that could help prevent such selection problems. City staff are also asked to set up a Black and Brown-Owned Business Taskforce.

Also notable on the agenda: The next step is being taken on reform of the charter that defines Cambridge’s government –there’s been no review since adoption of the Plan E charter eight decades ago; most municipal governments do a review every five to 10 years – by asking the city manager to ask the council for the money to do it. (Hey, that’s just how our charter works.)

Planning Board, 6:30 p.m. Tuesday. The board picks up a Cannabis Delivery-Only Zoning Petition, answering owners of potential marijuana-delivery businesses who have been inquiring with the city since May. The zoning would resolve the problem that Cambridge residents can get pot delivered – but not so far from Cambridge sellers. (Meanwhile, the board has granted special permits to 11 bricks-and-mortar cannabis retail stores, but none are open yet.) Televised and watchable by Zoom video conferencing.