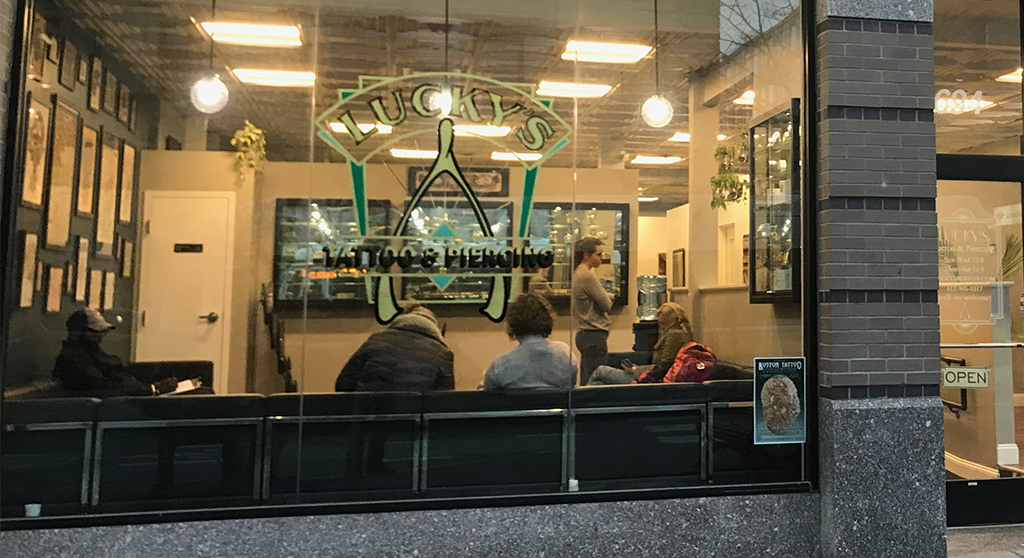 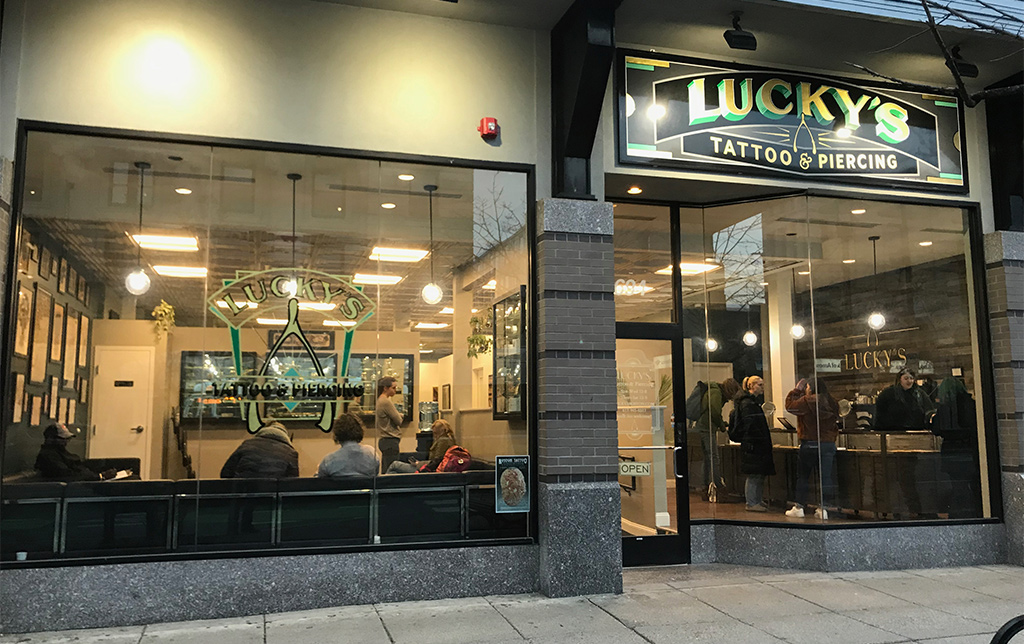 Under a License Commission proposal, a business such as Lucky’s Tattoo & Piercing in Central Square could host acoustic music for $100 a year. (Photo: Marc Levy)

Getting acoustic music into untraditional spaces such as bookstores and other shops began to look doable this week, as the License Commission took up the issue again after a rebuke from city councillors.

If the city’s reworked rules for retail uses eliminate zoning roadblocks, commissioners say they can streamline their processes to allow performances in businesses other than the restaurants and clubs that they already license, according to comments at a Monday meeting.

“I’m in favor of us trying to make all reasonable [allowances] to make it easier for businesses. We know they’ve been hard hit. And I don’t want to the commission to be a barrier to bringing businesses back” to profitability, said police commissioner Branville G. Bard Jr., a license commissioner along with the city’s acting fire chief, Gerry Mahoney, and chair Nicole Murati Ferrer.

The commission voted for Murati Ferrer to consult with city inspectors and create a system giving applicants a quick review to ensure it’s safe to host performers. “I’m certainly not working to drum up more work for the Fire Prevention Bureau, because they’re pretty much straight out as it is,” Mahoney said, suggesting that “if we have nothing in the system on a place in the past five or six years, we’ll take a look, or we’ll have them send photos or something like that. We need to be able to do our due diligence with respect to fire safety.”

With that approval for applicants, the commission would grant three months’ worth of one-day licenses for $25 (and a year for $100). Another commission vote empowered Murati Ferrer to ask the city solicitor if rates for currently licensed restaurants and clubs could be dropped to match, though their approval processes would not change.

Not about the money

The city has already reduced all existing renewal fees by 40 percent during the coronavirus crisis; a base renewal fee for an alcohol license that is normally $4,000 is now $2,400, for instance, City Manager Louis A. DePasquale said Monday. That’s meant a drop in revenue collections of more than $800,000. Deadlines for renewal fee payments have also been extended and prorated, which allows businesses to hold off until later in the spring on 85 percent of the amount they owe. “As far as I know, we are the only city in the region who has taken such aggressive approaches in our license fee reduction,” DePasquale said, crediting the city’s ability to do so to its “strong financial position.”

The City Council has also made it clear that it prefers a more vibrantly creative community over extracting fees from performers – not just by encouraging in-store acoustic entertainment Feb. 22, but by getting more buskers on the street. During a push in 2018, it was city staff fighting to keep a busker fee in place; councillors had to demand that it be ended, like in neighboring cities, noting that the revenue it brought in was negligible to Cambridge. Bard made a similar point Monday in arguing for an easier, cheaper acoustic entertainment process: “It’s certainly not a money issue for us or for the city,” he said.

The License Commission had brushed off the council’s acoustic entertainment proposal Feb. 17, noting that the densely packed nature of Cambridge made the noise of acoustic performances problematic. But when councillors responded angrily to a glib crushing of a years-old goal, Murati Ferrer explained that commissioners had responded only about existing licensees as requested by the Law Department, and as they understood current zoning. The Law Department still hasn’t given an opinion on whether new zoning allows the entertainment; the original idea was to go to the state Legislature for a home rule petition that would permit it, as in Boston.

Other votes by the commission empowered Murati Ferrer to recommend to the council that new businesses getting acoustic entertainment “either be removed from the noise ordinance as nonactionable or, if they are actionable, that the noise ordinance be amended so that there’s a more streamlined mechanism by which noise violations could be addressed” – meaning police, licensing inspectors or others could be empowered to issue fines for noise violations.

“The City Council needs to take some steps too, not just the License Commission, and either amend the noise ordinance or we do as you suggested with a ticket system,” Mahoney told Murati Ferrer.

Finally, commissioners voted to streamline acoustic performances by ending a requirement that anyone seeking live entertainment had to advertise their hearing in a printed newspaper edition at least seven days earlier. Instead, businesses will have to notify neighbors on all sides, including above them and across the street, of a hearing date.

The council proposal, which was written in 2017 by then member Jan Devereux, would allow five or fewer performers using one microphone or none, between 10 a.m. and 10 p.m.