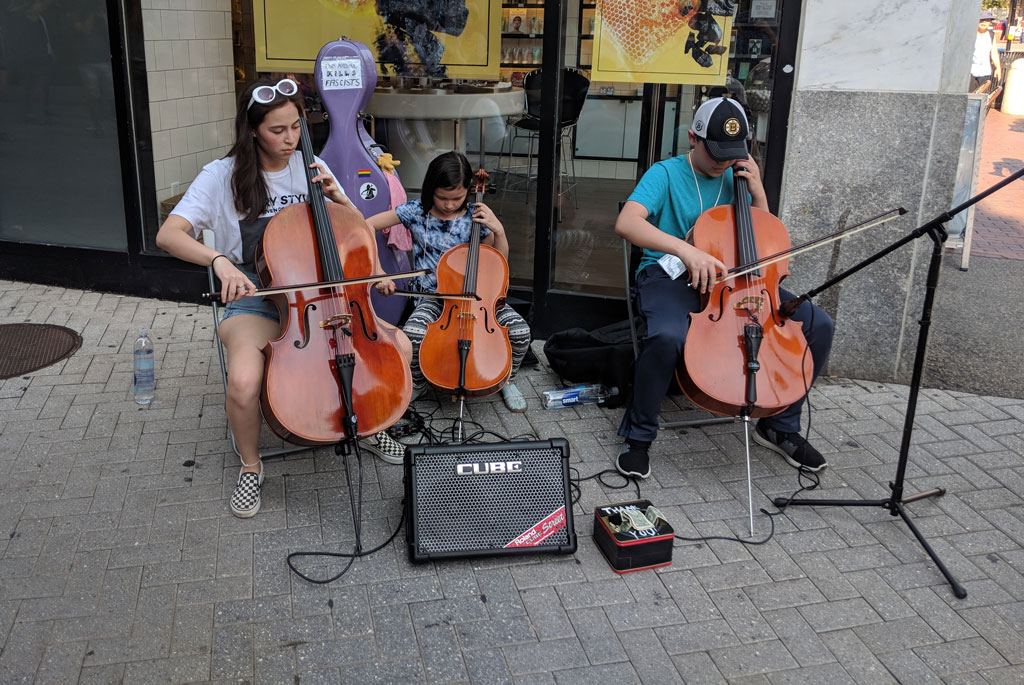 The streets of Cambridge will finally be as fee-free for musicians and other performers as the streets of Somerville and Boston, thanks to city councillors overriding Cambridge Arts officials who tried to keep fees in place.

Fee-free street performer permits and other changes, including an expansion of the rules to include poetry readings and real-time painting, kick in Jan. 1. As debate over fees went on Monday at the council meeting, Julie Barry, director of community arts for the Cambridge Arts agency, suggested the urgency to prepare for the new year outweighed the agency’s interest in fighting.

Councillors were surprised the agency fought for the fees at all, choosing to try to reduce individual permits to $20 from $40.

“We were all pretty clear that we were saying no fee – a permit, but no fee,” said councillor Alanna Mallon, head of a council arts task force, referring to a June ordinance committee meeting with the agency. She echoed councillors Quinton Zondervan, who said he was “frustrated” to see fees still included after the June conversation, and Sumbul Siddiqui, who was just as surprised to see permit-replacement fees proposed at levels that made them nearly as expensive as getting the initial permits.

Hearing that this far along in the legislative process Zondervan couldn’t use his “charter right” to set aside the proposed rules for one regular meeting, Siddiqui told representatives of Cambridge Arts that “we can’t charter-right it, but we don’t have to vote for it.” (The council amended the proposed rules instead.)

In defending fee reductions instead of stripping them out of the 20-year-old street performer ordinance, Barry repeated the belief at Cambridge Arts that paying fees “gave clout to the permit” and gave performers “skin in the game.” She and Cambridge Arts executive director Jason Weeks said their stance was based on conversation with artists who preferred Cambridge’s approach above the free-for-all approach of Somerville and Boston, where artists felt unprotected and businesses might feel put off by some performer noise but have no recourse.

But Zondervan said he “would still posit that a permitting system and permit fees are two separate things” and said that his own conversations with musicians didn’t turn up any support for paying fees. Mallon asked to see Cambridge Arts’ data on street performers who wanted to continue paying fees.

Artists have expressed how “demoralizing” it can be struggling against economic pressures, and the city can’t do much to control their costs, Mallon said. “We can control this one cost,” she said, “to say to artists, ‘We support you.’”

One change councillors didn’t undo: There is now a rule against using fire in a performance, such as in circus acts where there might be a fire-eater – a prohibition that Weeks said has been “in place, ad hoc” over the past 20 years, just as the Cambridge Fire Department argues that candles have never been allowed in city restaurants even though there had never been an actual city law against them.

“It’s another limitation on artists here that is not in other communities,” Zondervan said.

The change Monday drew a positive reaction from Haoyang James Liu, whose children – Isabella, 15, Tristyn, 14, and Lili, 9, who is the youngest registered street performer in Cambridge history – have been busking in Harvard Square for years at The Imaginators.

“We are happy with the result that the fee is removed and permit is still in place,” he said. “This will reduce the cost for those young performers, and also help regulate and protect them.”