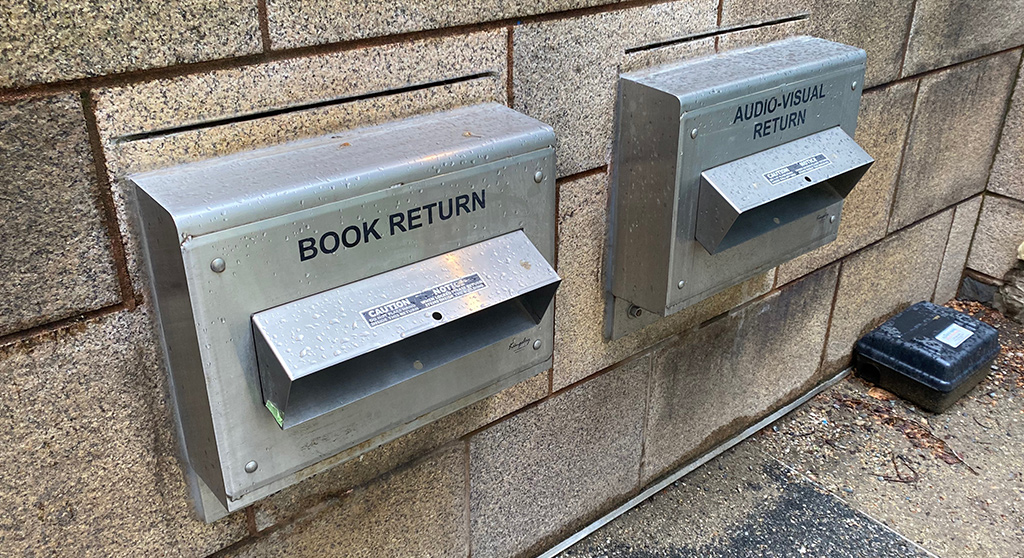 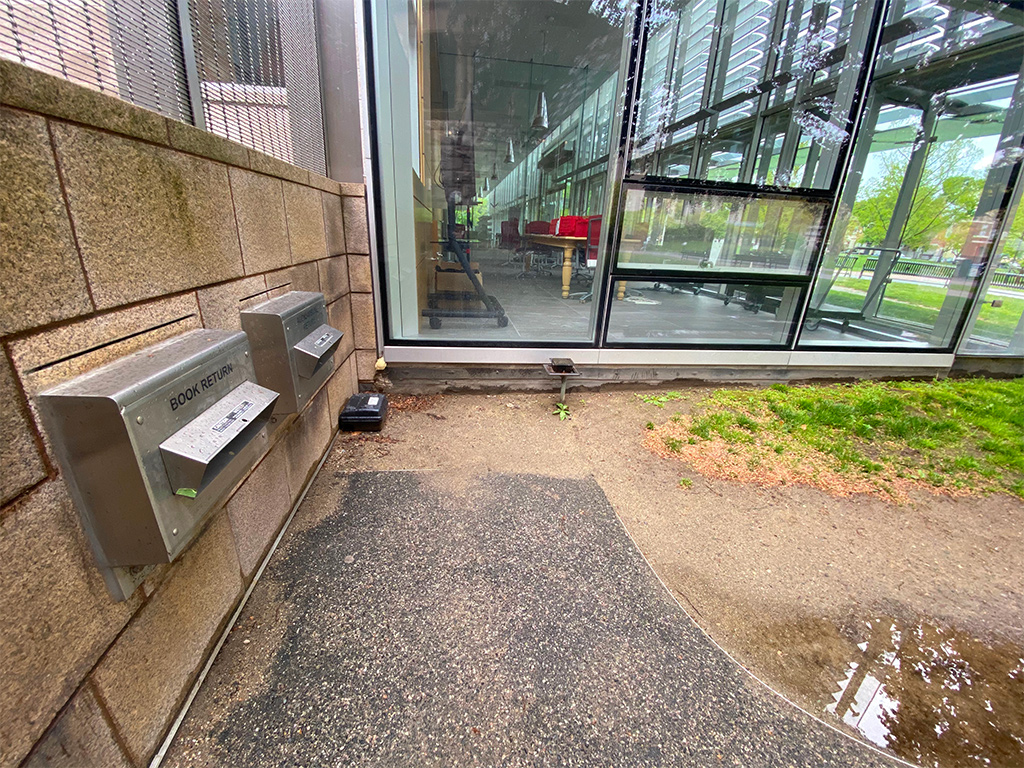 Return slots are available May 10 at the Cambridge Main Library, which is closed as a coronavirus safety measure. (Photo: Marc Levy)

Cambridge Public Libraries announced on March 13, 2020, that the system would be closing its doors for two weeks in response to the threat that the Covid-19 pandemic posed to the public and its staff. At the time, it was a reasonable and prudent response to a virus that was still very new and very frightening.

But as I write this, it is one year, two months and 20 days since the library’s initial notice of closing. Gov. Charlie Baker has lifted Massachusetts out of the stifling state of emergency we have lived under for more than a year. The actual state of emergency ends June 15.

Yet in spite of the science they have claimed to have been following for the past year, and in spite of the essential services libraries provide to the most vulnerable members of our community, officials at the Cambridge library network will not be resuming full services to the taxpaying, majority-vaccinated public. The library system has announced it will reopen the main library June 2 for limited in-person services, expand those services in the second half of June and start the process of opening branches in late June or July.

As we approach the end of the pandemic, despite a rough start, the United States is emerging out of it better than many countries, with robust vaccination programs taking place nationwide and more than 150 million people already having received one dose. Yet over a year in, certain institutions – ironically, the ones that have put on the biggest show about being progressive, inclusive and antiracist – are still closed.

Each week in her newsletters, the library’s director, Maria McCauley, voices her commitment to antiracism and inclusivity with a new Zoom event, whilst keeping the library’s physical spaces closed to the minorities and community members that research shows benefit the most from public libraries.

In an oddly foreboding survey from 2015, the Pew Research Center asked Americans from various backgrounds how library closings would affect them and their communities. Of the respondents, 78 percent of Hispanics and 72 percent of women said that closing libraries would have significant impact. Of those from homes with annual incomes of $30,000 or less, 37 percent said that a local public library closing would have a major impact on them personally. Anecdotally, as a freelancer who cannot afford a dedicated office space, I used the library every day I wasn’t working my second job, alongside elderly residents wishing to browse quietly through the print versions of daily newspapers from across the globe and members of newly immigrated communities who sought to use the library’s robust ESL services.

The safest and most equitable move the libraries could make would be to safely open their doors. If casinos, bookstores, private coworking spaces, gyms, yoga studios and countless other for-profit businesses (many of which are much less safe than a library) were able to figure it out long before now, why can’t a well-funded public service such as the CPL?

The library has tried to cover itself over the past year by offering curbside book pickups, but it has not even managed to master that. This is perhaps because library officials were implementing cumbersome and excessive strategies that weren’t following science, such as forcing every single book to quarantine for 72 hours after being returned, even though quite early on, the U.S. Centers for Disease Control and Prevention said the virus does not spread via surface transmission.

The irony is that, in towns with libraries that get far less funding, those in charge have found ways to adapt. One elderly resident of Cambridge, dissatisfied with the Cambridge Public Library’s curbside pickup program, took to social media to ask residents of other towns how their libraries were faring. She received responses from people in Framingham, Watertown, Arlington and towns all over the state who said their libraries were finding ways to cope and even (in the case of Watertown) allowing folks inside to browse during the pandemic. (The original commenter, who preferred to remain anonymous, responded to the flood of comments by saying: “Consensus is … every library does it better than Cambridge! Good to know.”)

While other, less-well-funded libraries were finding ways to safely open, in January the Cambridge library system shut down for several months the small sliver of services it was offering. This total shutdown (save for Zoom events) stood at odds with the city’s decision to increase the library’s budget by 25 percent for the 2021 fiscal year, to $15 million from $12 million. That extra money should have gone toward expanding branch hours and services, as stated on page V-171 of the budget document. For reference, Framingham’s library, which resumed full service in April, has a budget of just under $3 million.

Even in areas in which Covid-19 infections were far higher than in Cambridge, library networks have been doing more. The limited services that CPL only started offering this month has been in effect in New York City since July 2020. “We know how important it is to reopen our physical locations,” said Anthony W. Marx, president of The New York Public Library, explaining the motivation for the openings in a press release. “We know that our communities need us more than ever as they cope with multiple crises impacting public health, the economy and social justice. People are hurting. People need help. People need us.” Meanwhile, the Cambridge Public Library, for all its emphasis on inclusivity, was at one point deleting comments to its social media accounts from vaccinated taxpayers broaching the subject of openings.

While libraries serve everyone in society regardless of race or socioeconomic background, those who rely on them the most tend to be the most vulnerable members of our community, for whom the quiet, comfortable spaces that the library provides might be the only safe space they have in their lives. That’s why, when libraries close, it’s not likely that the wealthy upper crust of society – i.e. those with the loudest voices – will make a fuss. The chances are, their homes are large enough that they don’t need to leave the house for a quiet space. Maybe they can afford to buy all the books they want to read from Amazon or private bookstores (many of which are already open for browsing). Maybe they even have a library collection in their homes.

The offered “Library Express” is not the same as fully (and safely) opening. Libraries play an enormous role in leveling the playing field for those with fewer resources, and every single day that the CPL’s spaces are not made available to the public it is failing the antiracist mission that the library’s newsletters suggest it is committed to. How long these closings have gone on is an embarrassment for the City of Cambridge and City Manager Louis A. DePasquale, a public servant whose sole decision it has been to keep libraries closed, yet whose salary (which was recently approved at $330,000 with 2.5 percent bumps every six months) likely protects him from feeling the full impacts of the closings he is responsible for. Taxpayers need a date that the library will fully reopen, and accountability for the money that should have funded extending (not retracting) the library’s services for the first half of 2021.

Karine Vann is a freelance writer who covers waste management. She is a landscape gardener and an avid public library user.

This post was updated June 3, 2021, with information about library reopenings in New York, and about user comments being deleted on social media.