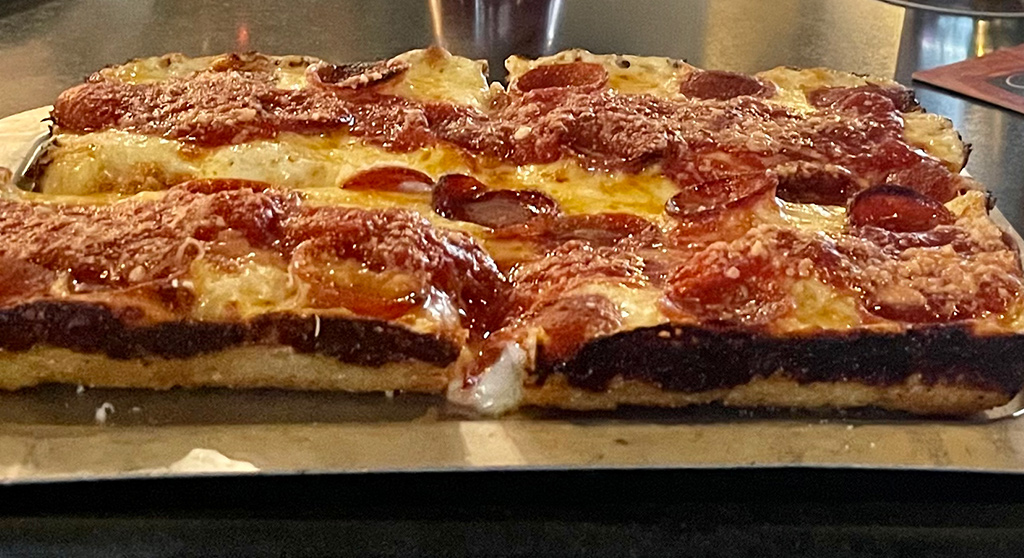 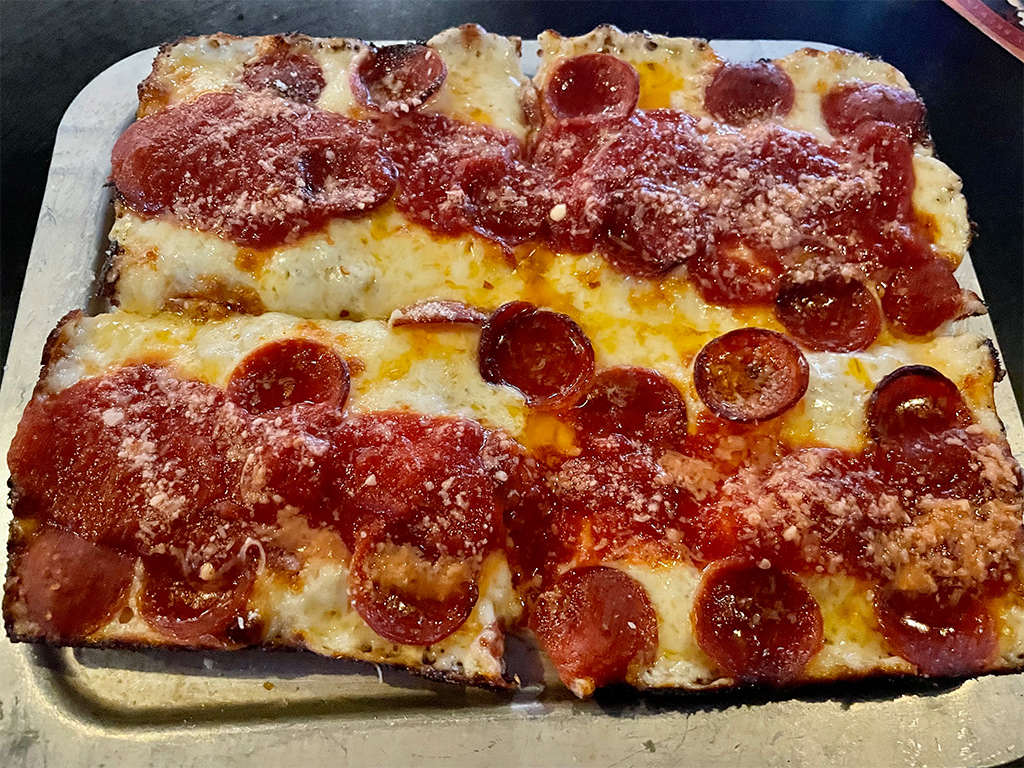 The Reg with pepperoni from Avenue Kitchen & Bar in Somerville. (Photo: Tom Meek)

Sadly, Pescatore, the neighborhood-styled Italian seafood restaurant on Boston Avenue in Ball Square, is gone, but there are some silver linings in the transition. For starters, you can still get great Italian seafood at Out of the Blue in Davis Square (more on that in an upcoming entry) and there’s Detroit-style pizza at the Avenue Kitchen & Bar that took over Pescatore’s storefront in 2019. If you’re wondering what Detroit pizza is – I was – it’s a square, crustless pie close to the thick, Sicilian style made famous locally by Pinocchio’s Pizza & Subs with a dough base that’s much thinner and that lack of crust. What that means is marinara and well-cooked cheese (like the torched or broiled top of a crock of French onion soup) that goes right to the edges, and a sauce that is super tangy, smooth and a real palate pleaser.

I got the basic offering (“The Reg,” as it’s listed on the menu) with pepperoni, and most definitely at the smaller size. The pie came in four slices – er, squares. I was close to sated at square No. 3, but even after No. 4 I still wanted more. That zest and cheese was a new and unique pizza experience, and one I wish to relive. Other ’zas on the menu included meatball, Chicken Bacon & Ranch and one with braised short rib. I was very happy with what I had and am not sure I’d change it up, though my interest was piqued by the sausage, pepper and onion version of The Reg.

Besides pizza, the menu has a lot of eye-catching intrigue to it. It’s not stuffed, but it is eclectic. Appetizers include shucked raw shellfish, steak and cheese dumplings as well as maple-glazed duck wings – that’s right: duck, not chicken. There’s even a grain bowl section that includes a Cobb, Southwest and your basic Caesar; burgers and sandwiches, headlined by the fried chicken and the meatball Parm; and mains that include miso salmon, jambalaya, steak frites and even vegetarian cauliflower steak frites. The space is clean and spare, with a high, black marble bar, closely arranged tabletops in the cozy dining area and a small patio out back. The result conjures a cosmopolitan vibe or, more accurately, the young, urban hipness of Davis Square, and yet it’s doors down from wildly popular old-school brunch spots Sound Bites and the Ball Square Café, known for their long lines on weekends and fisticuffs between the respective owners. Avenue Kitchen serves brunch as well, and if it’s anything like its pizza, I’m in. I’m sure the lines are less of a potential MMA beat down, too.