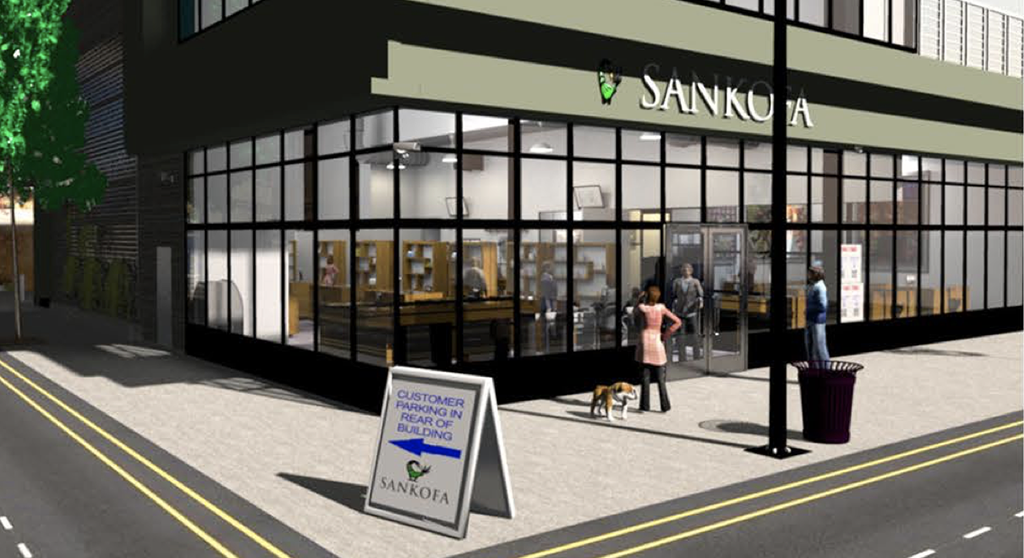 A recreational cannabis shop called Sankofa is proposed to replace a pet supply store on First Street in East Cambridge. (Image: Sankofa via the Planning Board)

Planning Board, 6:30 p.m. Tuesday. The 14-acre Volpe redevelopment in the heart of Kendall Square is back before the board. Things are getting real – members have a staff memo to consume before the meeting that includes regulation of MIT’s development plan if the board decides to grant its special permits. There’s also an application for a recreational cannabis shop and delivery service to consider, as Sankofa bids to go in at the 4,575-square-foot space at 95 First St., East Cambridge, replacing the Loyal Companion pet supply store that signed its lease in May 2019 after Petco departed.

Finally, the board may look at the plan to move an aging Eversource gas transfer station off Kendall Square’s showpiece Third Street to a rear space a couple of blocks away at 21 Athenaeum St. It’s part of BioMed Realty’s lab tower and public arts space project, and the Board of Zoning Appeal will rule on the move of the station. Televised and watchable by Zoom video conferencing.

The importance of cannabis cooperatives

Public Safety Committee and the Economic Development & University Relations Committee, 2 to 4 p.m. Wednesday. These committees run by city councillor Quinton Zondervan and vice mayor Alanna Mallon, respectively, will hear from Saskia VannJames, president of the Massachusetts Recreational Consumer Council, on the importance of cannabis cooperatives and how they might shape the city’s emerging recreational cannabis industry. Televised and watchable by Zoom video conferencing.

Yet another License Commission mystery agenda

License Commission, 9 to 11 a.m. Friday. No agenda has been posted yet, the fourth time this has happened since mid-April. This is the only city body that semi-regularly can’t present its expected business the week before a meeting and its legally mandated posting period, though legal notices for the meeting have been posted – maybe the next city manager will find a way to rein it in? Look for items on a Boiling Crab restaurant coming to 96 Winthrop St., Harvard Square; Hot Chix coming to 1220 Cambridge St., Inman Square; and Donut Villa Diner at 20 Prospect St., Central Square, getting an alcohol license that will allow it to add dinner hours. Watchable by Zoom video conferencing.