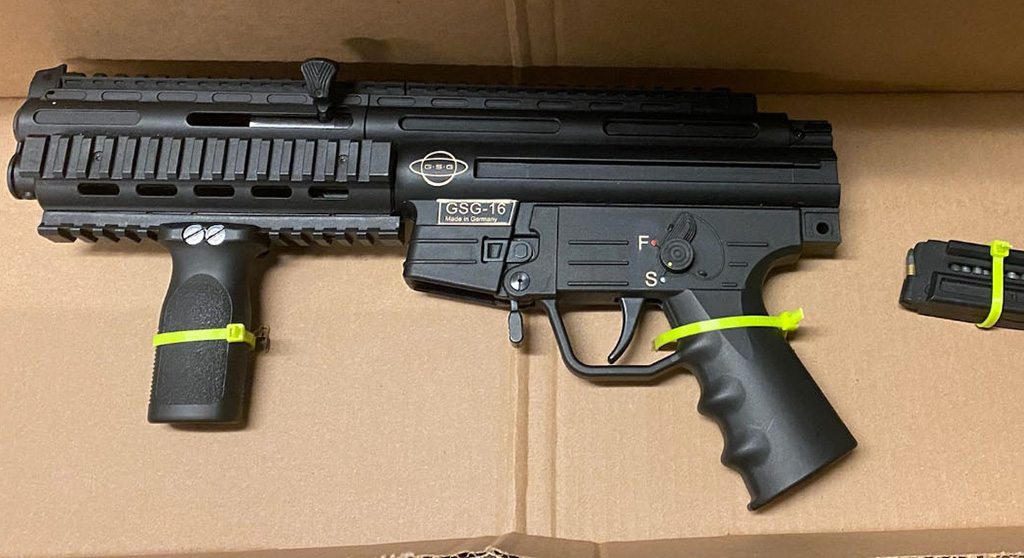 A semiautomatic GSG-16 long rifle pistol with one round in the chamber and 18 rounds in the magazine was taken Sunday from a teen in The Port neighborhood, police say. (Photo: Cambridge Police Department)

What might have become another in a series of gunfire incidents afflicting The Port neighborhood instead ended with the recovery of two loaded firearms and the arrest of two teens, police said Monday.

Police responded to a report at around 8:30 p.m. Sunday that two people walking near Newtowne Court had taken a gun from a backpack after arguing with another man. Officers found the pair matching the report at Broadway and Elm Street. After a brief foot chase, both were stopped and found to have two loaded firearms and ammunition.

“Eliminating gun violence in our city has been the top priority for the Cambridge Police Department. With cooperation from residents, we were able to quickly apprehend the suspects and make our streets safer by removing these loaded firearms,” said Christine Elow, acting commissioner of the Cambridge Police Department – her first day was Saturday – with the announced departure of commissioner Branville G. Bard Jr. for another job.

There have been nine gunfire incidents this year, seven of which have taken place within The Port. Several have reportedly escalated from arguments.

The teens who were arrested are Cayo Almeida, 18, of Somerville, and a 15-year-old from Brockton, police said. Almeida is scheduled to be arraigned in Cambridge District Court and the younger teen in Cambridge Juvenile Court, police said.

Anyone with information about the incident is asked to call (617) 349-3300 or make contact anonymously. Police have expanded a Neighborhood Sergeants Program in The Port to two lieutenants and three sergeants who all have worked or lived in The Port, police said. Their contact information is here.