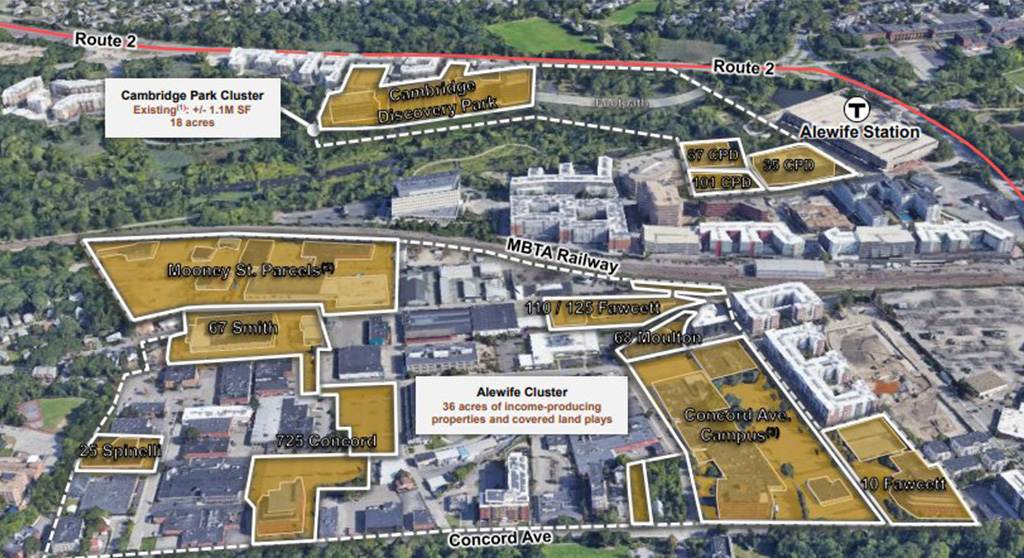 An image from a Healthpeak investor report shows the company’s holdings around the Alewife area.

A conversation about freezing the addition of offices or labs near Alewife was cut short Monday, but not before city councillor Patty Nolan revealed that a company called Healthpeak planned to spend an additional $225 million in the area, after already spending $391 million stealthily acquiring land since August.

Nolan’s proposed moratorium would last until Dec. 31, 2023, or “such time as new Alewife District zoning is ordained.”

The 36-acre, $616 million life sciences campus Healthpeak plans for the Alewife Quadrangle section of the Cambridge Highlands could tilt the area heavily toward a kind of business with little of the mix of uses called for in plans dating back decades. With a moratorium in place, “the city can come up with zoning that ensures the vision that we have laid out in various plans, starting from the 1979 Alewife plan right through to the Envision plan of 2019,” Nolan said. “The other critically important thing is [that this area] is the epicenter of so much of our climate mitigation work. It is in a floodplain.”

After Nolan introduced the reasoning behind her order, though, retiring longtime councillor Tim Toomey used his “charter right” without explanation to stop discussion until next week

A company executive, Scott Bohn, assured the councillors – and the eight residents who also spoke during a public comment period – that Healthpeak planned to work with the city on designing its campus.

“We are committed to working cooperatively with the city, community groups and stakeholders to develop this property in a way that achieves key community objectives, creating a great place to live and work,” Bohn said. “We spent a great deal of time studying the Envision Alewife plan and view it as a guiding document for what we seek to develop in this area. We embrace the overarching themes of the Envision Alewife plan, including creating a mixed-use district that includes both commercial and residential uses with focus on urban form, mobility, traffic mitigation, climate, sustainability and public green space, among others.”

Healthpeak, Bohn said, “is in a position to effectuate the change that the Envision plan sought to achieve. A project of this scale requires an extremely thoughtful approach to planning, with input from many parties. We plan to move through the planning process hand-in-hand with the city and the community in an open and transparent manner.” Bohn is a senior for the Denver company and vice president and co-head of its life sciences division.

The address Bohn gave was 35 CambridgePark Drive, a lab building of 224,000 square feet that Healthpeak bought in December 2019 for an eye-popping $332.5 million, which would move the Denver company’s purchases in the area to around $949 million within around two years – before construction costs. Markups paid by Healthpeak for some of the 19 parcels bought since August, even on properties that had traded recently, ranged from 22 percent to 262 percent.

A company investor report says it has been “land-banking” in Cambridge to “develop and densify” property as part of a “mixed-use assemblage over the next decade.”

“We heard [Healthpeak] saying they really want to work with the council, they’re eager to work with us, they want this to be in line with our vision – well, passing this means that we’ll all be working in line with the vision,” Nolan said of her policy order, noting the need for such things as housing, light industrial jobs for residents, pedestrian bridges over train tracks and municipal facilities. “We have a [Department of Public Works] that desperately needs space and that right now is renting some space there, which is going to be at risk if this corner of Cambridge gets developed.”

Twelve of Healthpeak’s acres previously owned by Cabot, Cabot & Forbes had been planned as the base of an “Alewife Quadrangle Northwest Overlay District” rezoning that was presented as based on the three-year Envision plan for the area. But Cabot “conveniently left out the fact that the same plan called for wider streets and sidewalks … in the guise of conforming to the Alewife district plan, CCF was cherry-picking what was to their advantage by obscuring what was not,” Loomis Street resident John Chun told the council. “We can’t repeat the same mistake we did with CCF. We can’t be caught off guard without having the Envision and Alewife district plan reviewed and ordained by the city.”