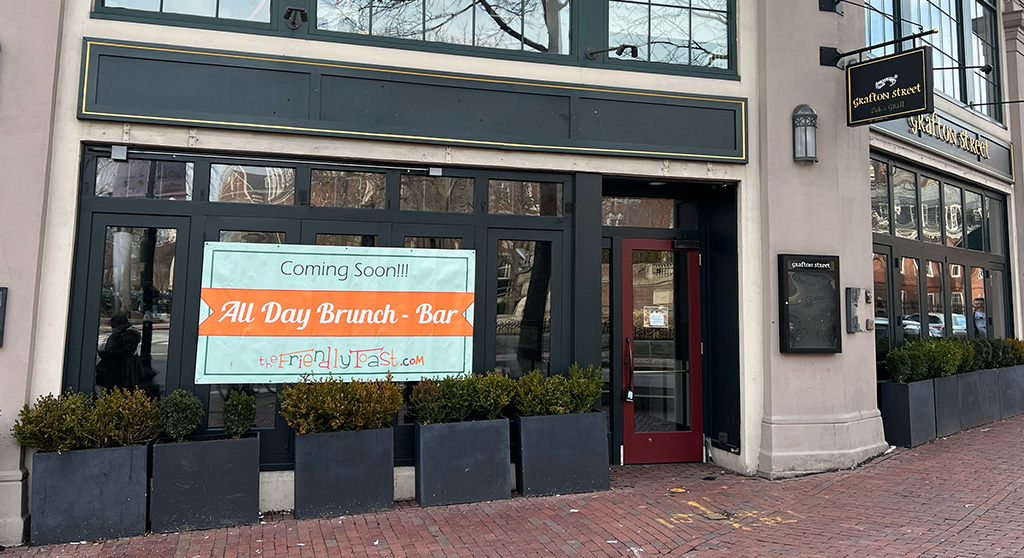 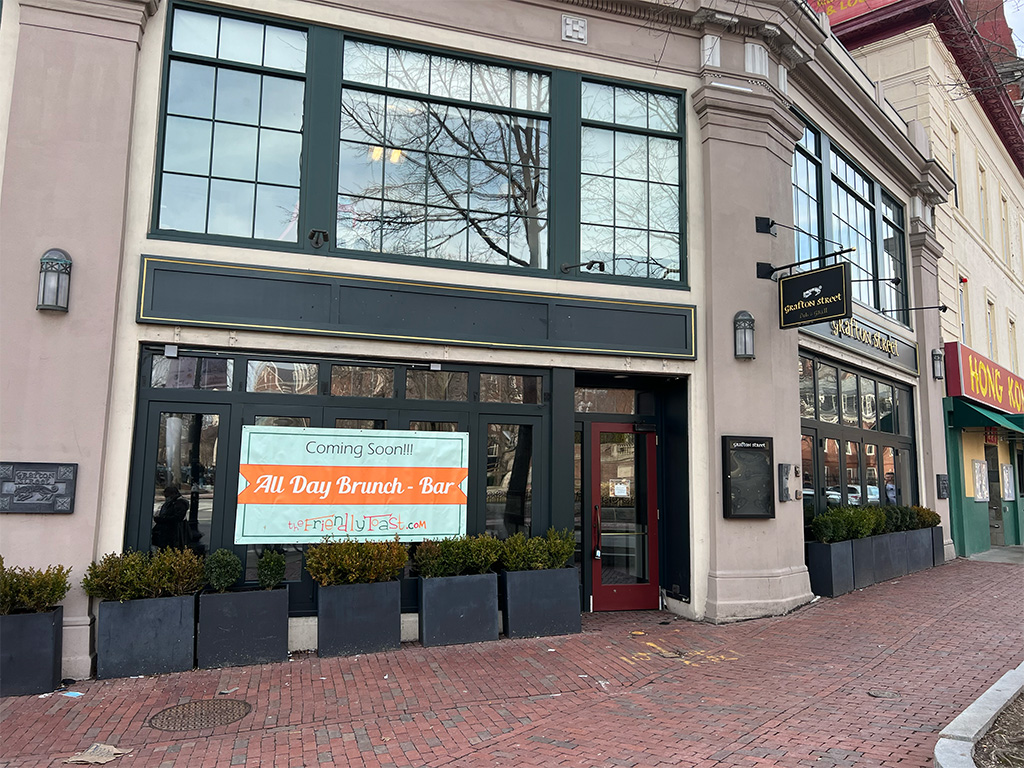 True to its word, The Friendly Toast is coming back to Cambridge – but to Harvard Square, not Kendall Square.

A sign appeared this week on the former Grafton Street Pub & Grill, 1230 Massachusetts Ave., announcing that the location will “soon” be a Friendly Toast location with all-day brunch and bar. Workers at the chain’s Back Bay, Boston, location and Chestnut Hill locations said that could be as soon as April or May.

Grafton Street is a Grafton Group restaurant that, like the Park Restaurant & Bar, also in Harvard Square, and Temple Bar between Harvard and Porter squares, closed March 17, 2020; Grafton Street had a brief reopening last fall, then closed with the arrival of the coronavirus delta variant. In November, Barcelona Wine Bar was approved to take over the Temple Bar space, opening as soon as this month at 1688 Massachusetts Ave., Neighborhood 9. The fate of Park is unannounced. (Grafton Group also operates the Russell House Tavern and Hourly Oyster House, which are open.)

“It’s painful to lose Grafton Street. It’s been incredibly popular, and Patrick Lee [of Grafton Group] has been a wonderful friend and partner in Harvard Square. I know he was gearing up to reopen and was looking for more success there,” said Denise Jillson, executive director of the Harvard Square Business Association.

Having a new breakfast spot in Harvard Square was a plus, though, as Jillson says she is often asked by visitors where they can go for the foods Friendly Toast is known for.

The owners of Friendly Toast, meanwhile, closed the doors permanently in August 2020 but said they hoped to relocate within Cambridge when it was safe – in terms of coronavirus, and financially. “We look forward to being in a Cambridge neighborhood again soon,” they said.

The Harvard Square site will become the chain’s ninth. Aside from one each in New Hampshire and Vermont, all are in Massachusetts. The Chestnut Hill location opened just Friday.

The restaurant opened in 2009 and became known quickly for its eclectic brunch, kitschy decor, and amiable staff. (In 2010, it took fourth place as the best breakfast in America from “Good Morning America.”) Four years in, new ownership brought in Marcus Thompson, of The Barking Crab and Uno’s Chicago Grill, to run the Toasts in Kendall Square and New Hampshire.

Friendly Toast says it will not reopen in Kendall, hints at post-coronavirus future in different site