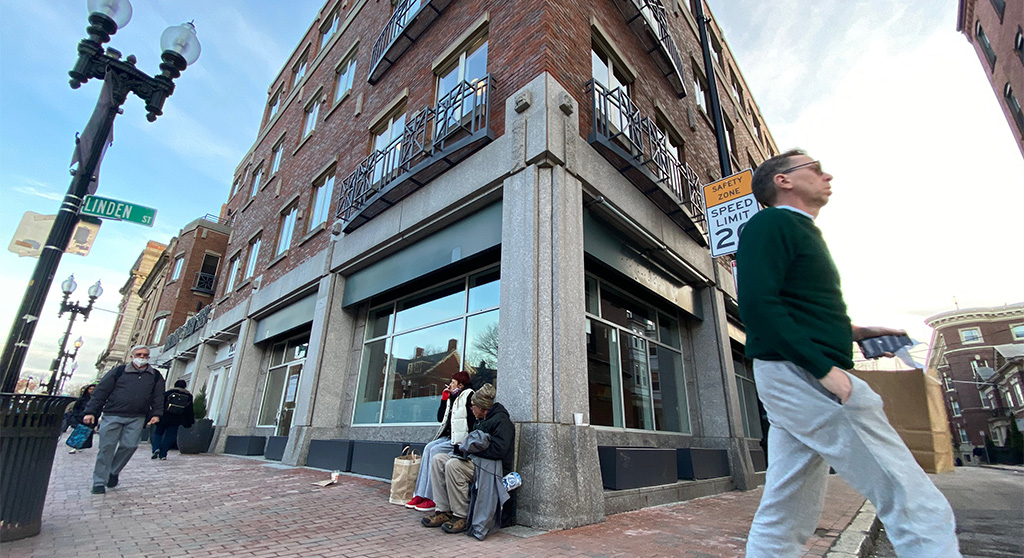 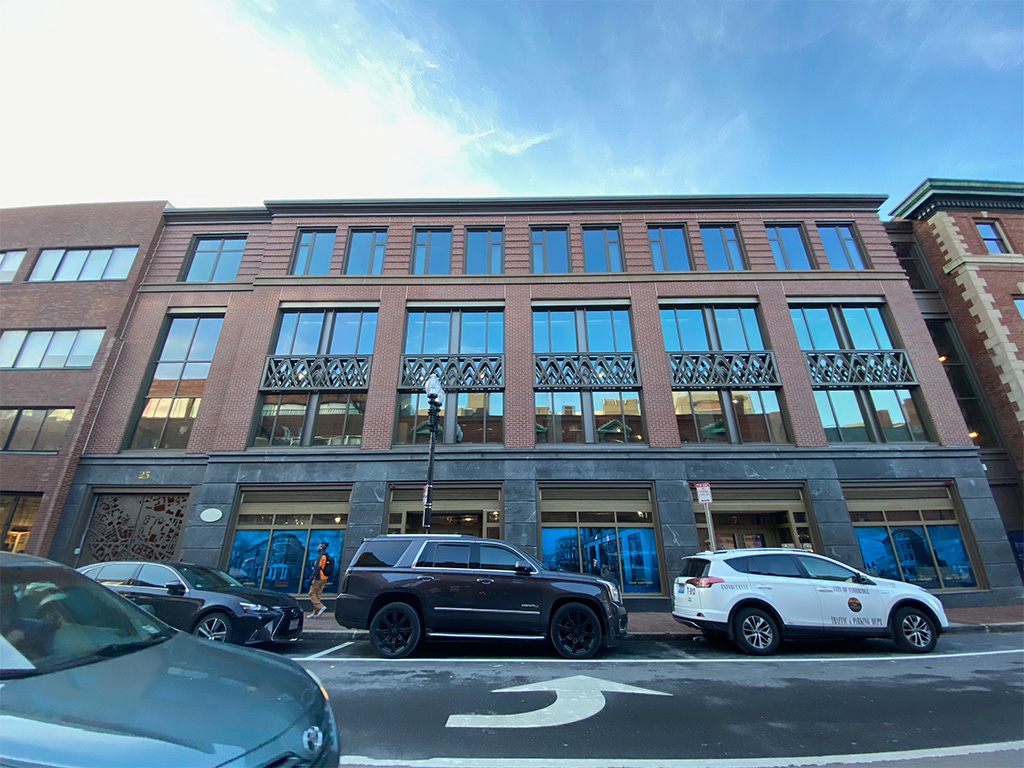 Recency Center’s Abbot building is nearing an opening in Harvard Square, but a Chase Bank awaits a permit for construction inside. (Photo: Marc Levy)

Inspectors will reconsider their approval for a Santander Bank trying to relocate within Harvard Square, while a Chase Bank planned for the soon-to-open building known as The Abbot is still awaiting a permit for a fit-out, said Ranjit Singanayagam, commissioner of Inspectional Services.

The permit has been pending for several months based on whether Chase’s design for its space needs to go before the Planning Board for review, said James Rafferty, the local attorney for Regency Centers, the owners of The Abbot.

The Chase branch was the first tenant to be identified for the four-story block of retail, offices and restaurants at 1-30 Brattle St. Now it’s known that the list of businesses going in includes The Comedy Studio, back from Somerville’s Union Square; El Jefe’s Taqueria, relocating from the nearby Garage mall before it too is revamped; a Tiger Sugar boba tea shop; and two places to work out – a Central Rock Gym for climbing and F45 for high-intensity interval training. Starbucks is expected to be in The Abbot as well since closing its last of three Harvard Square coffee shops in November near the MBTA headhouse.

As of Tuesday, though, Chase doesn’t appear on The Abbot’s list of merchants.

A change of zoning in Harvard Square has led to more wrangling. A design with Chase taking up more than 25 linear feet along JFK Street sidewalk was fine until passage of the Harvard Square Overlay District law, and now it is not – yet Regency paid $1.6 million for parking relief, a need that was undone at the same time, and is not yet getting it back. Rafferty is asking how one change can apply and not the other. 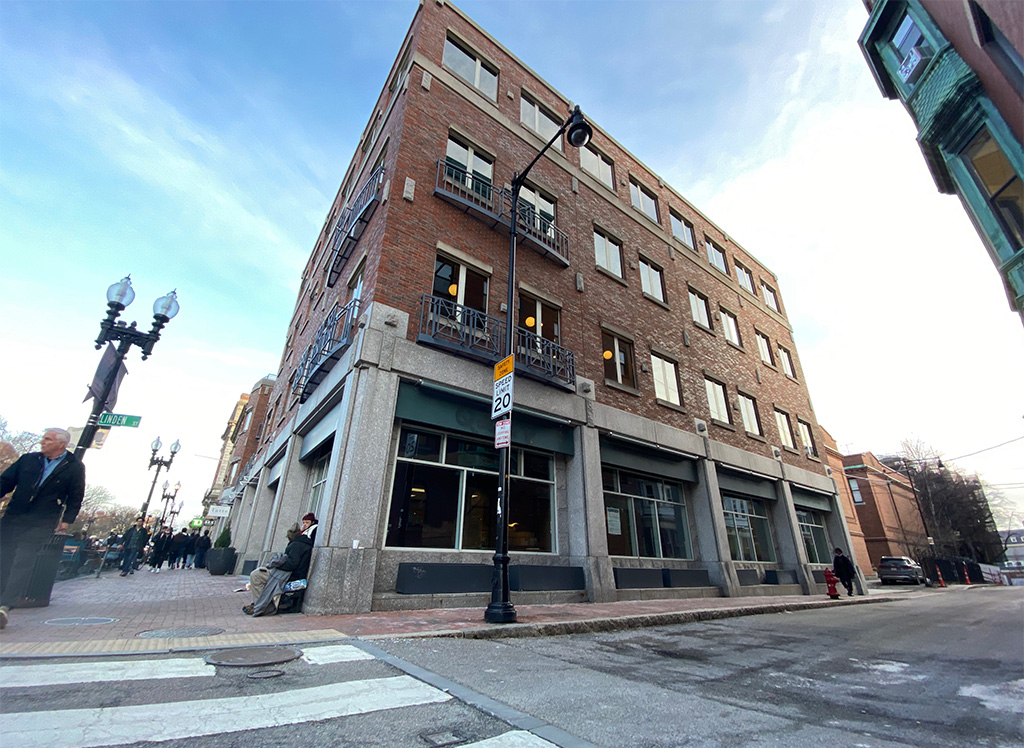 Santander Bank is looking to move into a former Qdoba at 1290 Massachusetts Ave. (Photo: Marc Levy)

Meanwhile, Santander Bank was before the Planning Board in May asking to relocate to the former Qdoba space at 1290 Massachusetts Ave. from 1420 Massachusetts Ave., but it was a move that violated the intent of the Harvard Square Overlay District to decrease the amount of street space taken up by banks; this expansion of frontage drew a negative recommendation from the Harvard Square Advisory Committee.

In February, Santander withdrew its request from the board agenda because ISD signed off on its plan to get around the zoning: installing art in a 3-foot-wide space facing the windows along Linden Street that was presented as an art gallery. Though Santander would have the lease on the whole property exceeding on both sides the 25 feet of frontage allowed by the Harvard Square overlay zoning, it would look less like a bank as it stretched down Linden Street, according to submitted plans.

The Law Department was asked by inspectors to review the bank’s reconfigured rental space and “determined that it complied with zoning, and so ISD issued a building permit,” said Harvard Square Neighborhood Association president Suzanne Preston Blier. With an ATM and second lobby entrance, the bank still looks to be 7 inches over on Massachusetts Avenue, and the “afrt gallery” solution never came before the Harvard Square Advisory Committee, Blier said.

Some are crying foul.

“The ‘art gallery’ use is clearly in name only … it does not have any meaningful area with which people may enter, no bathrooms and literally no accommodations associated with this separate commercial use,” said Patrick Barrett, an attorney who helped write the new overlay zoning for Harvard Square, in a letter to ISD. The gallery “is obviously an extension of Santander and even within Santander’s rentable square footage … Based on the drawing set submitted, it looks like they are in violation of the ordinance even with their phony ‘art gallery.’”

The maneuver sets “a terrible precedent for future banks coming into the square,” Barrett said, while Blier said that the solution of putting arts in windows risks growing “stale,” considering the same approach is being taken by sellers of recreational cannabis.

The reconsideration for Santander will be done internally, not at a public meeting, Singanayagam said.

Denise Jillson, executive director of the Harvard Square Business Association, said she hoped banks would understand the importance of working within the overlay’s guidelines to avoid “space on your main drag that’s blank after 6 o’clock at night and on the weekends. [Bankers’ hours] doesn’t provide for a good pedestrian experience,” Jillson said.

Jillson had sympathy for Regency Centers, which has had a “long haul” over the past seven years to an expected opening within the next months.

“It would be a very good thing for the community if we could have a significant anchor tenant paying a respectable or even a high rent that can help subsidize some of the locally owned independents that we all want and desire,” Jillson said.