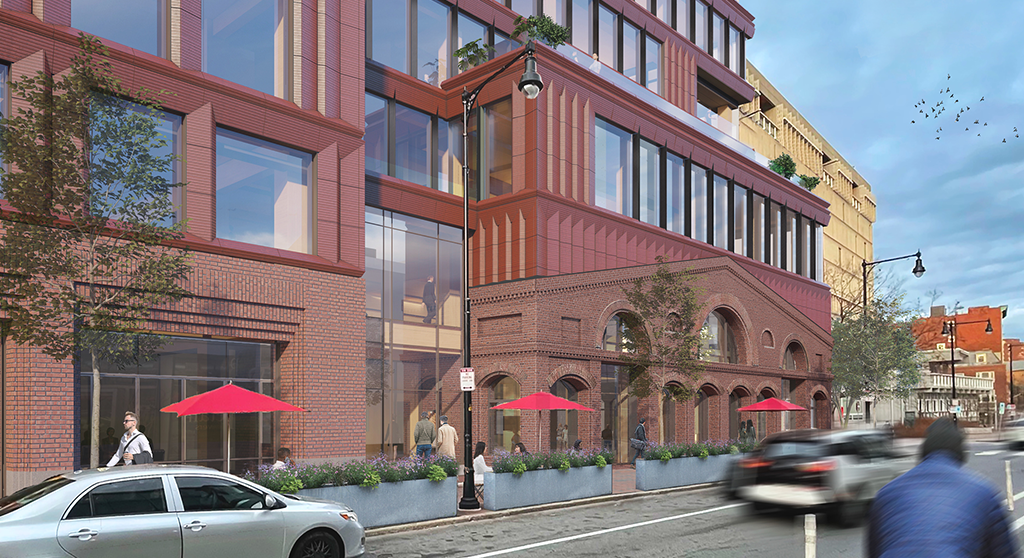 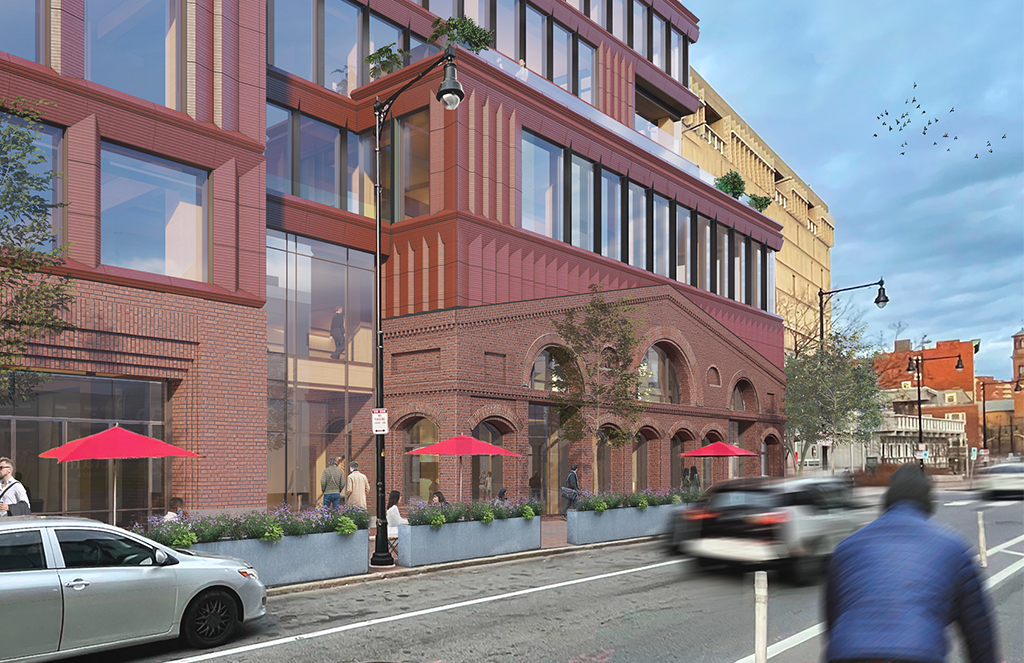 The Garage, a Harvard Square destination for shoppers and diners over the past 40 years, would be remade under a proposal by owners Trinity Property Management, opening in 2024 with expanded restaurant and entertainment space below ground; street-level shops and eateries with more access from surrounding sidewalks; and offices on five stories overhead.

It’s not clear if the building would keep the Garage name – that’s part of a public process that will begin with an expected June 3 appearance before the Historical Commission, Trinity’s John DiGiovanni said Friday. 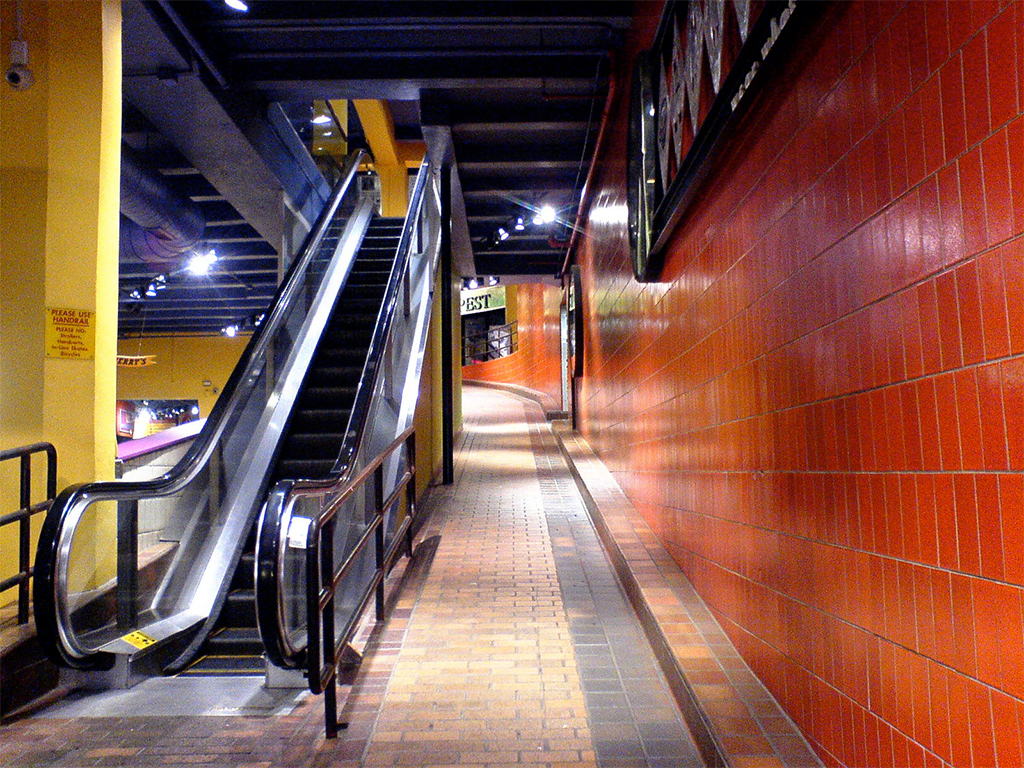 A unique feature of The Garage is its central ramp, left over from the days the mall was an actual parking garage. (Photo: Steam Pipe Trunk Distribution Venue via Flickr)

The past four decades have seen countless visitors streaming up The Garage’s unique ramp structure to buy music and merchandise at Newbury Comics, shop for jewelry and high-end audio equipment, take classes at the New England School of English on the top floor or enjoy Vietnamese food at Le’s and ice cream at Ben & Jerry’s. The Garage has hosted Chameleon, the very first licensed tattoo parlor in Massachusetts, DiGiovanni said, and was home to George Howell’s original Coffee Connection (later a Starbucks).

But even before the coronavirus pandemic battered businesses, DiGiovanni could see that the nature of retail was changing, and Harvard Square and The Garage were at risk as any shopping district. As a property manager, he had physical proof. 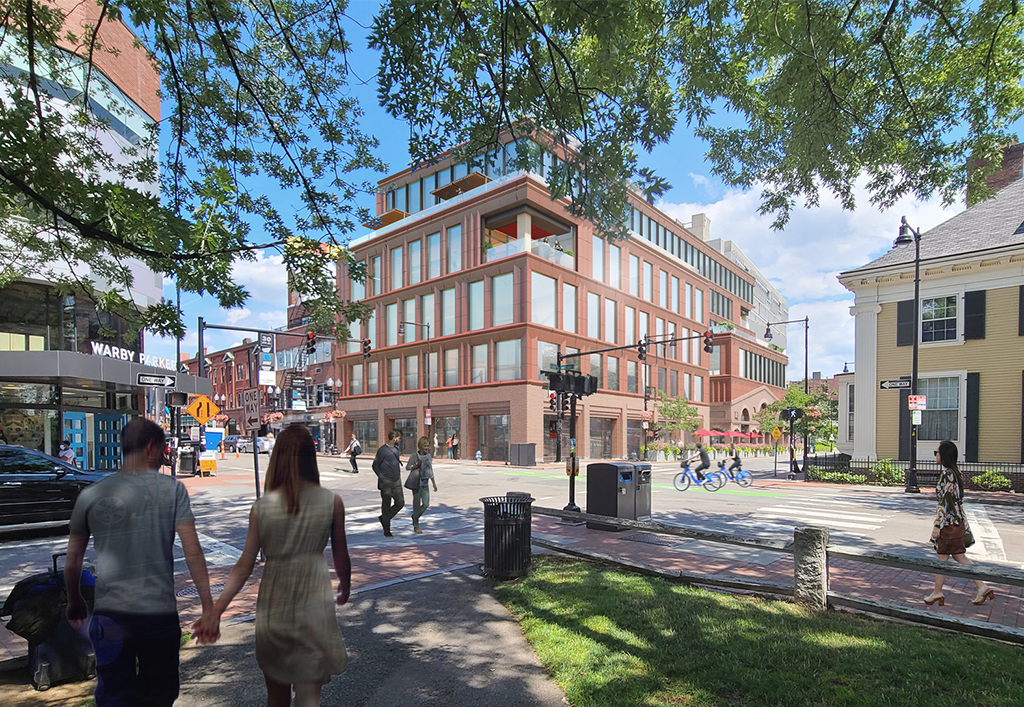 A remaking of the building at 36 JFK St., Harvard Square, is seen from Winthrop Park in preliminary renderings. (Image: Bruner/Cott Architects)

“We used to have to change the door handles and the door closers on a pretty regular basis [because of wear]. We don’t have to change them anymore. People just are not going through those doors,” DiGiovanni said. “It does sort of break your heart a little bit, because I remember how cool and how active that interior space was.”

Even street-level retail can struggle now, and shops that customers have to search out – such as Newbury Comics, the anchor on the second floor – are even more vulnerable. “We managed to put the escalator in the building to physically bring people up to the second floor. It was pretty hard even back then, but even more so today, to manage a building with a driveway right up the middle of it,” DiGiovanni said.

The Garage at 36 John F. Kennedy St., now four stories plus a below-ground space that most famously hosted John Harvard’s Brewery & Ale House over 27 years (and, more recently, a Tasty Burger dining area) occupies the southern half of a block on Mount Auburn Street between JFK and Dunster streets. It began as stables, and was converted into a parking garage in the 1920s – then to the zeitgeisty urban shopping mall where hippies could stop in to The Hempest and anime and manga fans could shop Tokyo Kid. As part of Trinity’s plan for the building over the past three years, it consulted with the Historical Commission about preserving part of the original 1860 building – from when it housed the horses that pulled trolley cars. “We’re restoring that and rebuilding the gable that was on Mount Auburn Street,” DiGiovanni said. “It doesn’t exist anymore, but we’re building a portion back from historical photos.”

The redesigned building would have around 110,000 square feet – 30 percent retail and restaurants and 70 percent commercial office space – in an 80-foot building allowed by special permit. Trinity expects there to be 18 months of public process, leading to a possible 18 months of construction and a possible opening in the spring of 2024.

The Harvard Square Neighborhood Association was introduced to the project this week and had a steering committee meeting Friday that discussed it, coming out “supportive of a potentially wonderful project,” association president Suzanne Preston Blier said. “Right now the interior of The Garage is not efficiently used and not particularly viable as a space. So this makes really good sense.”

Though there could be some tweaks to the design on JFK Street during the public process and she hopes to see public meeting space added, “we’re looking forward to something that will be beautifully crafted and thoughtfully engaged. We think this is very exciting for the square,” Blier said.

There’s now adjacent construction where Regency Centers is building a large retail space with the historic Abbot Building as its Brattle Street peak, but JFK Street should be free of obstructions for a year before work starts at The Garage, DiGiovanni said. And Mount Auburn is wide enough that it shouldn’t see major traffic disruptions.

Current Garage tenants know what may be coming, DiGiovanni said. Even before reconstruction plans were in place, Ben & Jerry’s had told Trinity it would relocate rather than renew its lease. For other tenants, “there is time to manage that, and we’ll work with them,” DiGiovanni said. There are spaces open in the square now, some of which could make for easy transitions because they belong to Trinity. “The tricky part is to bring them back, because they don’t want a potential hiatus of 18 months [of construction]. I would like to bring some back if I could, but I’m just not sure that’s going to work for them,” he said. “This is sort of a tricky balancing act.” 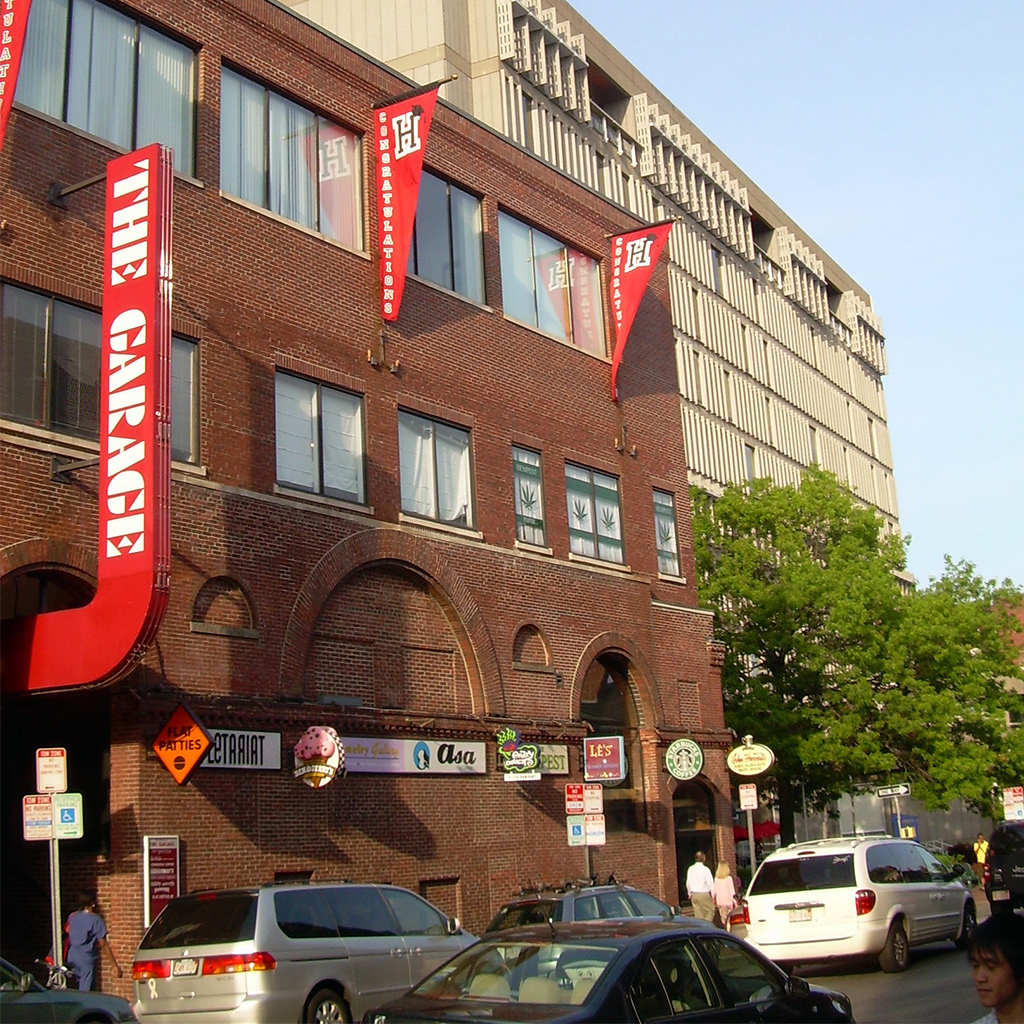 Retailers and eateries that did return would find higher ceilings in the below-ground space, better access to their businesses from the streets and an attractive structure overhead with a series of terraces. “If you really look at the 400 linear feet of this building between the JFK, Mount Auburn and Dunster sides, up just shy of half of it is not engaged with the street – hasn’t been ever, since it’s been retail,” DiGiovanni said.

Dunster Street could benefit the most. “We think we could really improve an important corridor in Harvard Square … from Harvard Yard to the dorms,” DiGiovanni said. “With the fact that the kiosk is getting its upgrade and Forbes Plaza has been made fully accessible, if we can coordinate with the city and the other owners on Dunster, we can really make that corridor something terrific that can connect to those plazas. It could be a really special place in the urban district to gather and have some wonderful public events.”

Denise Jillson of the Harvard Square Business Association was contacted Friday for comment.