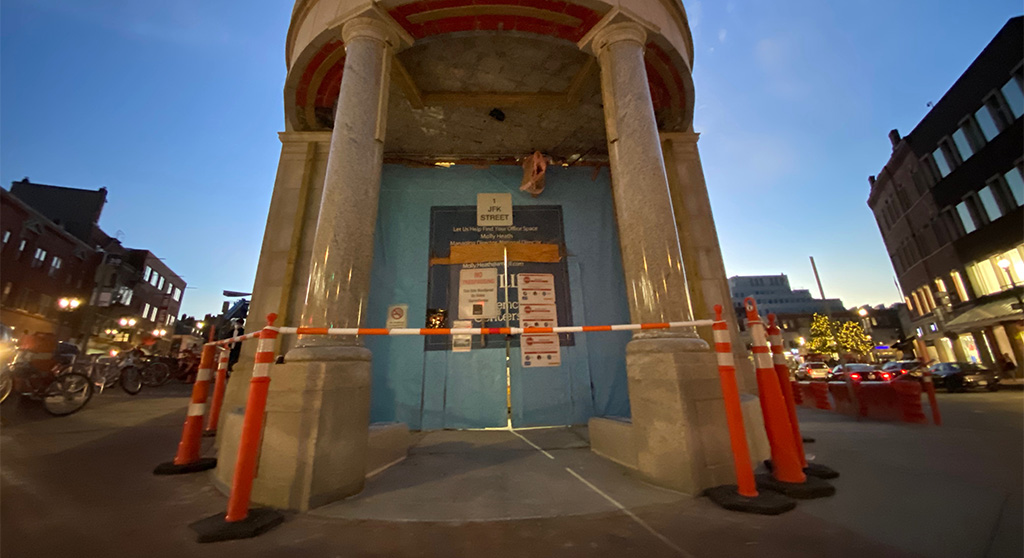 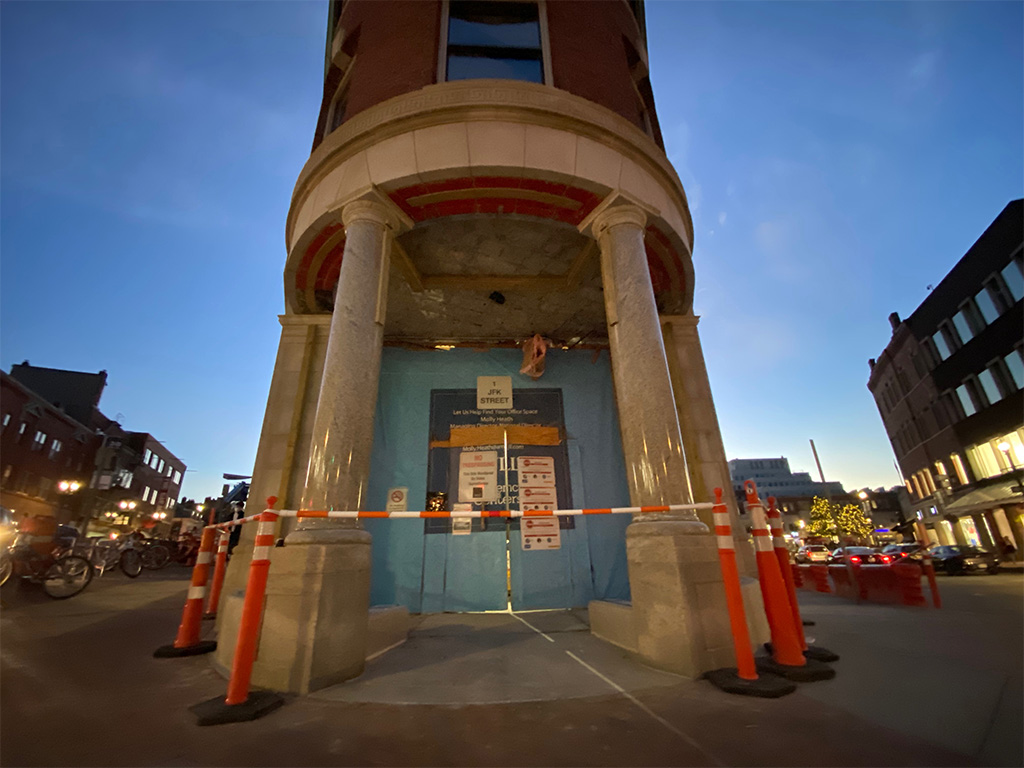 The Comedy Studio is expected to come next year to a prominent location still under construction at JFK and Brattle streets. (Photo: Marc Levy)

The Comedy Studio is returning to Harvard Square in 2022.

The club, which has been in Somerville the past three years, will have a prime, 200-seat basement location at JFK and Brattle streets, trading one Harvard Square institution for another: That’s where The World’s Only Curious George Store was for 23 years, until the coming of The Abbot led eventually to a shutdown. It positions the club to capture a college audience and tourists that flow through the square, as well as visitors getting around by T – customers that are harder to find at the current site.

The Comedy Studio news was expected to be announced Monday. Details were discussed in late October by owner Rick Jenkins and director of operations Kathe Farris with the agreement they wouldn’t be revealed until a lease had been signed.

The location “kind of fell into our laps, [but] it just kind of works. It was just good timing and dumb luck,” Farris said.

The entrance on JFK Street will be roughly where the Catch a Rising Star comedy club was in the late 1980s, Jenkins said. The club at 30B JFK St., in what’s known as The Waugh Building, was a famed spot for comics such as Steven Wright, Jerry Seinfeld and Joy Behar – though not as long-lived as The Comedy Studio itself a few blocks away, on the third floor of the Hong Kong restaurant at 1238 Massachusetts Ave.

The club began April 14, 1996, when The Comedy Studio name was attached to events that began in March 1995. In its more than 20 years, The Comedy Studio has launched the careers of stars such as Gary Gulman, Sam Jay, Jen Kirkman, Eugene Mirman, Baratunde Thurston and Emma Willmann and been visited by everyone from Ali Wong and Mike Birbiglia to Anthony Jeselnik and Sarah Silverman. 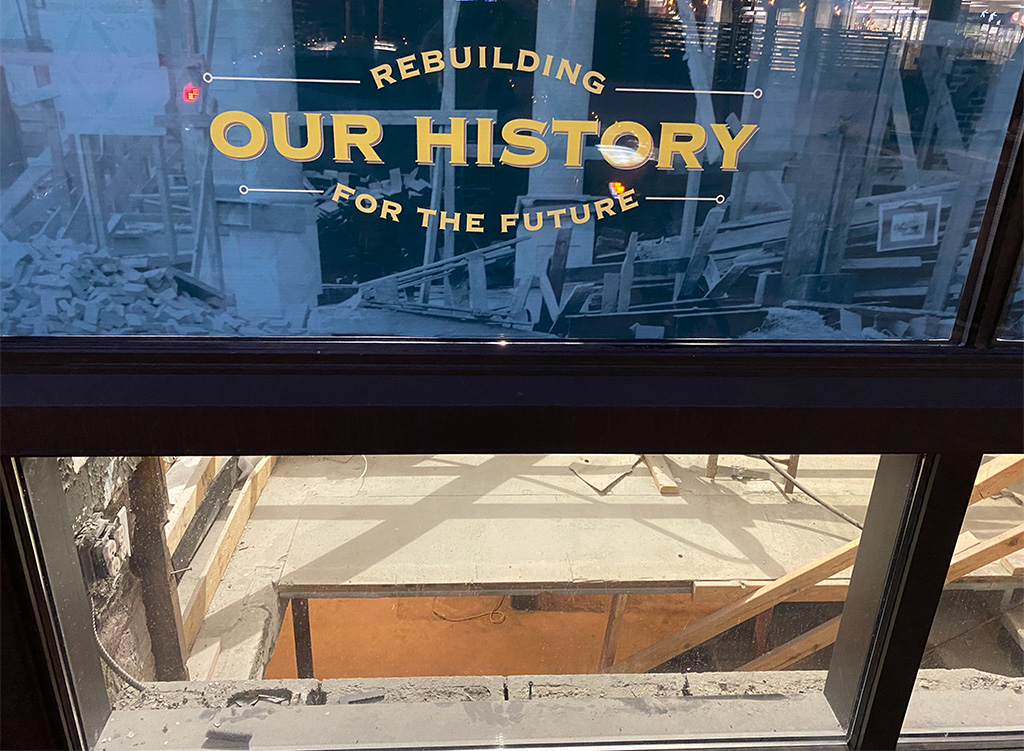 Construction at The Abbot gives a glimpse at stairs expected to be the basement space of The Comedy Studio. (Photo: Marc Levy)

Rent hikes in 2017 forced Jenkins to relocate from the restaurant. Bow Market managers Zachary Baum and Matthew Boyes-Watson stepped in and Jenkins, with some friendly investors, built a new Studio fronted by a Variety cocktail bar in Union Square, Somerville, opening on Sept. 20, 2018.

Jenkins hoped the Bow Market retail complex of small shops and eateries around a courtyard would become a permanent home; his team never imagined that they would have less than a year and a half of operations before a pandemic arrived. Bow Market and Jenkins also had different ideas about how to emerge from the pandemic, leading to Jenkins and Farris establishing a residency at Vera’s restaurant and bar, also within Somerville’s Union Square. They expect to be there until the Abbot space is built out. 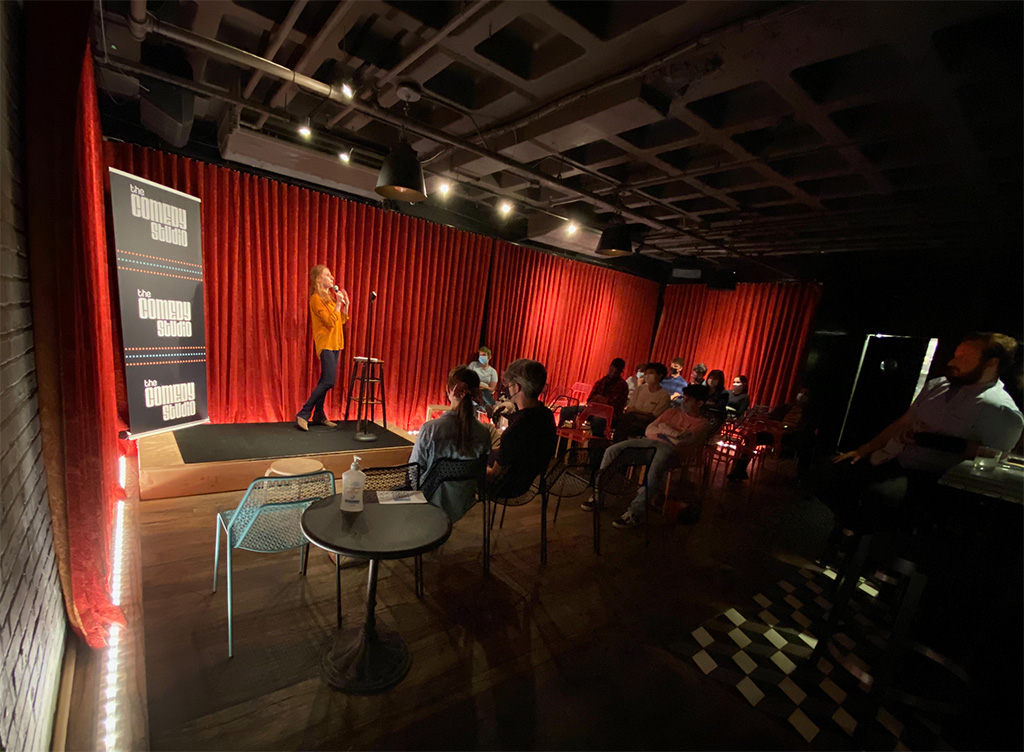 Though the pandemic took a lot out of The Comedy Studio – clubs were the first to be closed by coronavirus precautions and the last to reopen – Jenkins said they were lucky to be able to jump on the Abbot building space when it became available “between aid and people taking short furloughs. Really we got through Covid the same way we built the place in the first place – everyone pitching in a little bit.”

As at Bow Market, the next Comedy Studio is expected to have its own bar.

The new space – with the basement feel being “great for aesthetics,” Farris said – will be the biggest yet. While there were around 75 seats atop the Hong Kong, and the Bow Market club had room for 100, the Abbot basement allows Jenkins and Farris to double that.

A Mark Wahlberg rock-climbing gym is expected to go in overhead. That’s good because “when they close, we open,” Farris said.

Denise Jillson, executive director of the Harvard Square Business Association, said the studio’s return would be welcome. “Anything that brings people to Harvard Square is a good thing. The Comedy Studio was a longtime Harvard Square institution” and having it back “would be terrific,” Jillson said.

Word that The Abbot would host a bank landed with a thud last week, but Jillson said other news expected from its owners, The Regency Centers, should be more in line with the Comedy Studio announcement. “Aside from [Chase Bank], I think Regency is doing a good job of bringing back or bringing in businesses that the community will feel good about,” she said.