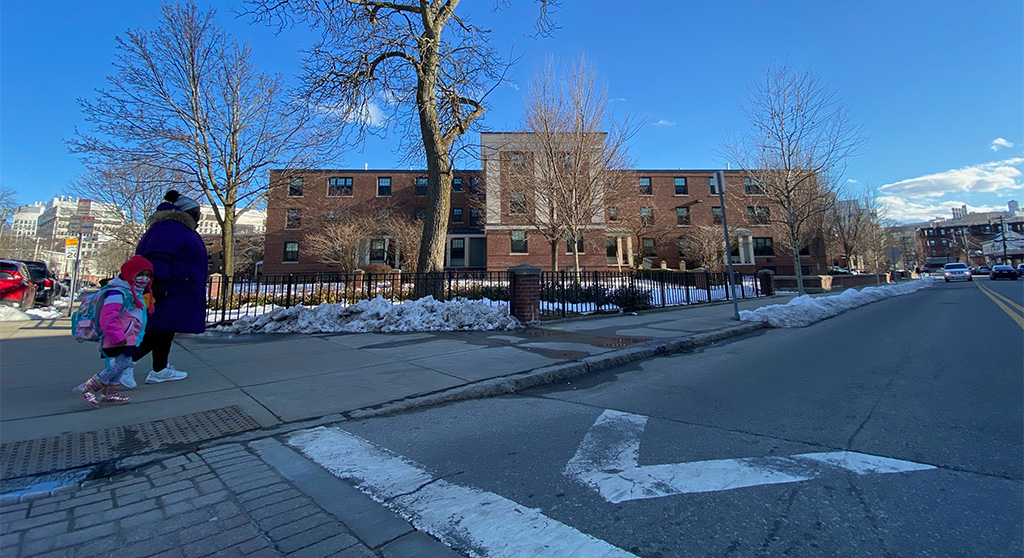 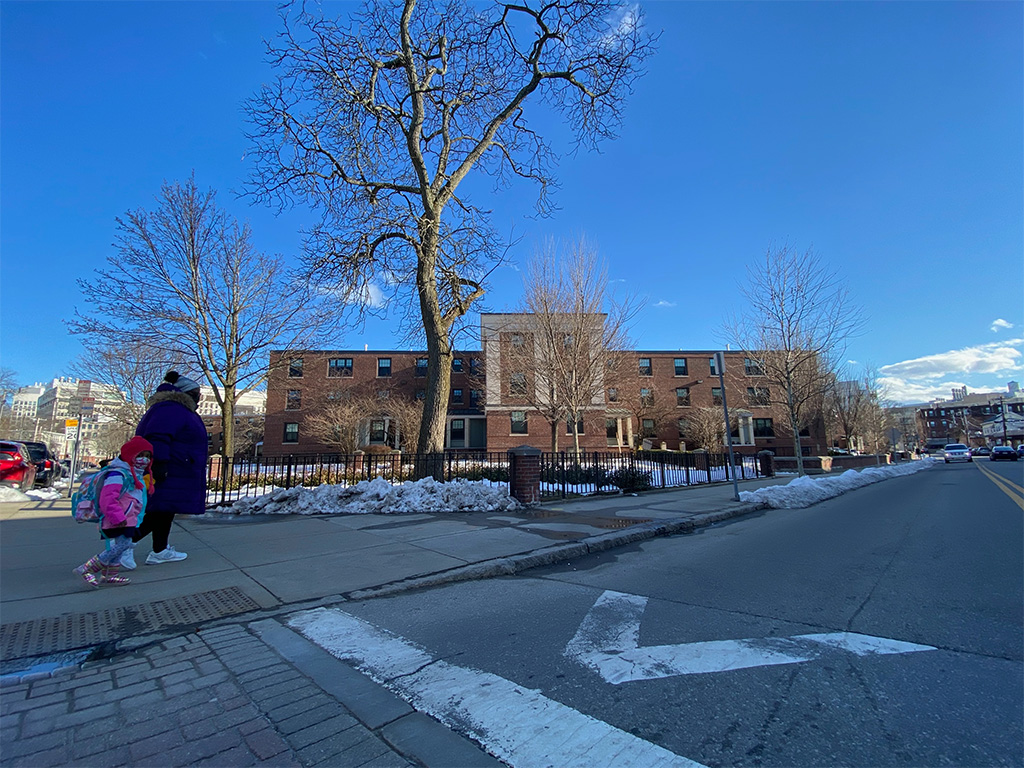 The Port is home to some of the city’s lower-income families. (Photo: Marc Levy)

Three orders that could change life significantly for Cambridge’s lower-income residents were approved Monday by city councillors, including a call to put some of the $65 million in federal Covid aid the city is getting into a guaranteed-income program.

The policy order by Mayor Sumbul Siddiqui asks the city manager to explore expanding on a test begun last year called Cambridge Rise, which gave $500 no-strings-attached monthly payments via debit card to 130 eligible single-caretaker households over 18 months starting in September – part of an initiative begun by Mayors for a Guaranteed Income, a group Siddiqui joined in late 2020.

The order was adopted unanimously, like one that would give all high school students free CharlieCards for bus and subway rides throughout the school year and another offering support for a state-level bill called the Fair Share Amendment. It would add a 4 percent tax on annual incomes above $1 million to go to “quality public education, affordable public colleges and universities and for the repair and maintenance of roads, bridges and public transportation.”

The CharlieCard concept was backed by the Cambridge Youth Council and passed through the School Committee with another unanimous vote. It builds on the approach taken by giving free meals to all students regardless of income, which decreases stigma and lowers barriers toward getting help to those who need it, backers said. “The first people to access the resources that Cambridge provides will be the first people to show up. And unless you have access to transportation, you will not be the first at the table,” said Irene Hill, a youth council member who spoke Monday. 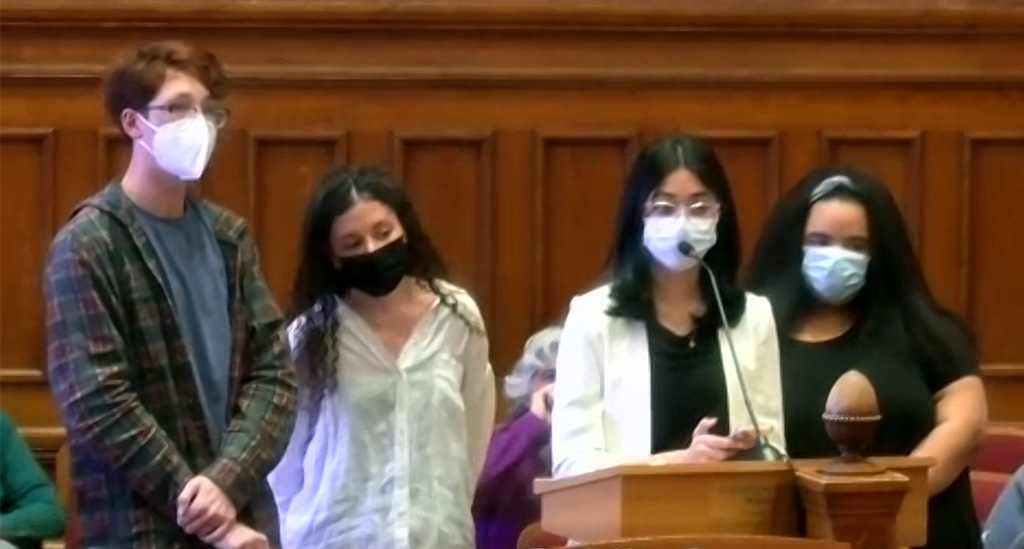 Members of the Cambridge Youth Council speak Monday in favor of subsidized CharlieCards for students. The image is a screen capture from city video.

The pursestrings of the city are controlled by City Manager Louis A. DePasquale. Control of the $65 million – coming from the U.S. Department of the Treasury through the American Rescue Plan Act – began a debate in June over how much control the council should have over it, leading to a series of Finance Committee hearings to review spending proposals. Another hearing is scheduled for Wednesday on the city’s ARPA application and funding status.

The city keeps track online of projects getting those funds or being considered for them, including an additional $23.1 million in Covid aid coming through the state for a total $88.1 million to be applied to community needs. Listed committed funds total $22 million as of Friday, with another $10.7 million pending – leaving more than $55 million.

“I believe we’ve prioritized what we’ve heard from the council over and over again, and we’ll continue to work with you to make sure that we’re really listening to the priorities. But like I’ve said, $88 million is a lot, but it can go quickly,” DePasquale said at the most recent hearing, March 3. The city is “trying to make sure that every project that we move forward with is absolutely going to be defendable” for reimbursement.

Cambridge can go on incurring expenses until 2024 under the act and has until 2026 to spend the reimbursements.

The Cambridge Recurring Income for Success and Empowerment program had a little over $1.5 million in funding to support its families for the test period, and drew more than 600 applications for the 130 slots – “and that was just for single-caretaker families, it was not open to all residents currently living in Cambridge in poverty,” Vice Mayor Alanna Mallon noted Monday.

In Cambridge, one out of every 10 families with children under the age of 18 lives below the poverty line, including one in three female-headed households with minor children, according to data from the test launch. Cambridge residents who are black or African American and those who are of Hispanic or Latinx origin are twice as likely to live under the poverty line, with the pandemic exacerbating the health and wealth gaps by race and gender. According to a research report by the Cambridge Community Foundation, 20 percent of the city’s population earns an average $13,000 yearly, and of the families with children in this group, nearly 70 percent are headed by a single caregiver. According to federal guidelines, a family of three with an annual income of $21,960 is considered below the poverty line.

Privacy guidelines prevented some details of the test from being shared, but what was known to the Cambridge Housing Authority was “positive and uplifting,” said the CHA’s Zach Gordon.

“It’s really making a huge difference in the lives of the participants,” Mallon assured. “They’re using that funding on basic necessities like rent, food and utilities, but they’re also using it for their kids’ extracurricular activities that were out of reach before – for that family vacation they’ve never taken, to get ahead and have some breathing room and maybe to even save a little, to have a [financial] cushion.”

Councillor Marc McGovern, who helped lead the test program with the mayor and vice mayor, said what struck him from conversations with participants were the small things it allowed that other Cantabrigians take for granted. “When my kids say to me, ‘Can we get Chinese food tonight, or can we get ice cream,’ I don’t really have to really worry about whether I can afford the 40 bucks to do something special with my kids. For a lot of low-income families, they have to say no to their kids all the time because every penny counts,” McGovern said. “To do some fun things that the rest of us take for granted is just so huge for people’s mental health.”

Manager to report back

The Rise program is “exactly what we should be doing,” said councillor Quinton Zondervan, calling it “transformational justice [in which] instead of doing the same thing over and over again and expecting different results, we’re doing something different.”

Geeta Pradhan, president of the Cambridge Community Foundation, said the guaranteed-income pilot had proved “an extremely cost effective and important investment to prevent a further slide into poverty.”

An ongoing program must take into account the short-term nature of the federal funding. Mallon said the “hardest part” of the test was finding the money for it, for which she thanked Pradhan’s foundation as well as The Boston Foundation, Harvard and MIT for stepping up to help prove the concept.

The city manager had long since left by the time councillors were discussing their policy orders, so there was no immediate reaction to the guaranteed-income or CharlieCard proposals. Both ask for reports back – with the one on guaranteed income requested in a “timely manner.”