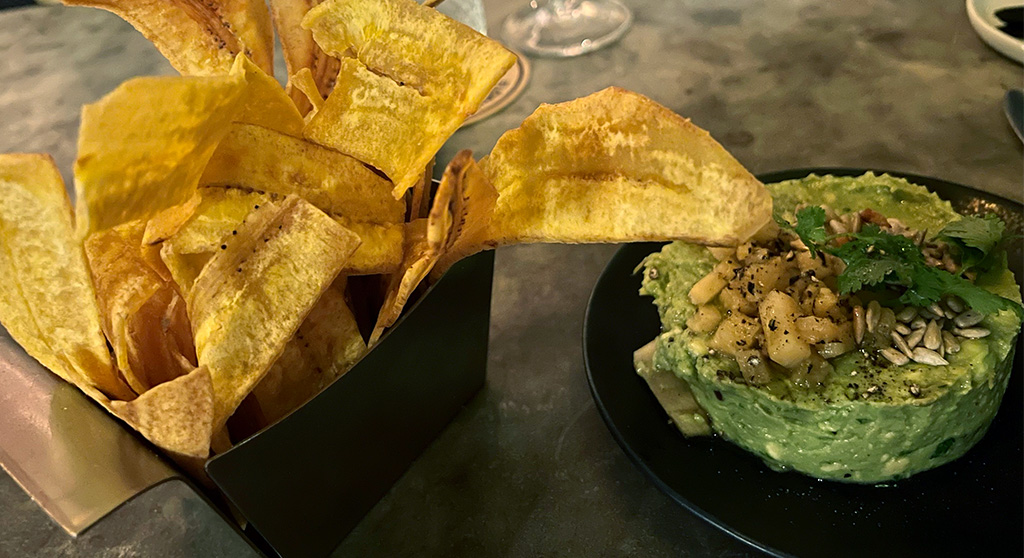 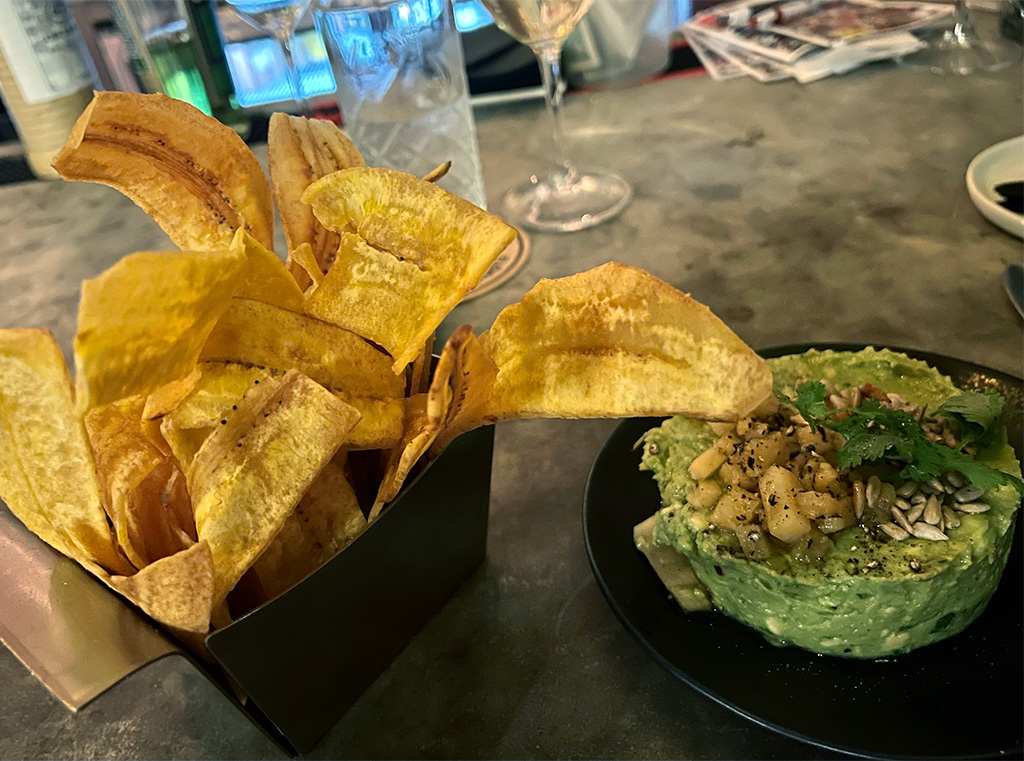 You have to admire the attention to Cuban cozy at Gustazo Cuban Kitchen & Bar, just north of Porter Square on Massachusetts Avenue. It’s homey yet exotic, intimate yet open. Given its world cuisine niche, Gustazo is an apt replacement for the French-Cambodian Elephant Walk, which it replaced in 2019, and a perfect neighbor for the French bistro Collette just up the way in the Porter Square Hotel. Throw in Sugar and Spice (Thai) and Yume Wo Katare (the ramen stop where people line up to get in) and you’ve got incredibly diverse flavors in a 350-yard stretch. What drew us to the eatery’s Caribbean flavors and accents most recently is the James Beard nomination of Havana-raised chef and owner Patricia Estorino.

Gustazo checks the box on many eaters’ dietary focuses and restrictions. Larger plates offer a balanced array: roasted chicken (arroz con pollo), slow-roasted pork (puerco asado), steaks (shredded flank in a tomato sauce and rib-eye with smoked pineapple chimichurri) and two from the sea (seafood stew in a rich coconut broth and seared mahi mahi with coconut rice). The small plates, however – split into vegetarian, pescatarian and hearty, meaty finger-licking finger fare sections – are where I like to live, and they’re not so small. The empanadas are baked, so you can ring the bell on “more healthy” there. The crispy Berkshire pork belly with avocado purée (chicharrones) and grilled baby lamb chops (chuletas de cordero) are popular orders and server-recommended faves. I can attest that the camarones a la plancha (grilled shrimp atop a bed of sweet corn, onions and cilantro) and ceviche (sea bass with coconut milk and avocado) are winners, especially the seared shrimp (formerly, they came with their heads on, and the menu still says the same, but …); they’re meaty yet tender and perfectly accented by the light sauce and medley of fresh ingredients. The Jonah crab tacos (tacos de cangrejo) in soft plantain shells (like a corn tortilla but sweeter) with purple cabbage, yogurt slaw, grilled corn and watercress are a hearty, (not so) small eat. They’re so meaty and juicy you’d almost think you were chowing down on long-braised carnitas. The menu also has grilled octopus (pulpo) and great sides, such as black beans and rice, and a cilantro sauce with plantain dipping chips.

But the must-have at Gustazo is the Guacamole Cubano. Infused with grilled pineapple, red onions and topped with chopped sunflower seeds, it comes with perfectly crisp plantain dipping chips. It’s a creamy, zesty guac that puts most others to shame. And those plantain chips, while crisp, don’t have the deep-fried greasiness of many “crispy tortilla chips.” It’s a healthy serving, too; with tacos or empanadas, it’s more than a meal for one and nearly enough for two.

On the drinks side, the Domaine Zafeirkis Greek white wine is a crisp and refreshing revolution, and the cocktails have a definitively Cuban accent (rum, rum and more rum), be it the traditional mojito, which you can also get with mango and ginger; the Hemingway daiquiri; or Cuban Cigar of aged rum, cigar rum (I guess that’s a thing), scotch and Havana & Hide bitters. For dessert, if you’ve got the kids or not, there are churros (the fried dough confection is a frequent post-dinner demand of my daughter), flan (a must have) and a chocolate cigar. If only they had the real ones to go with a Hemingway-esque scotch to close out the night.