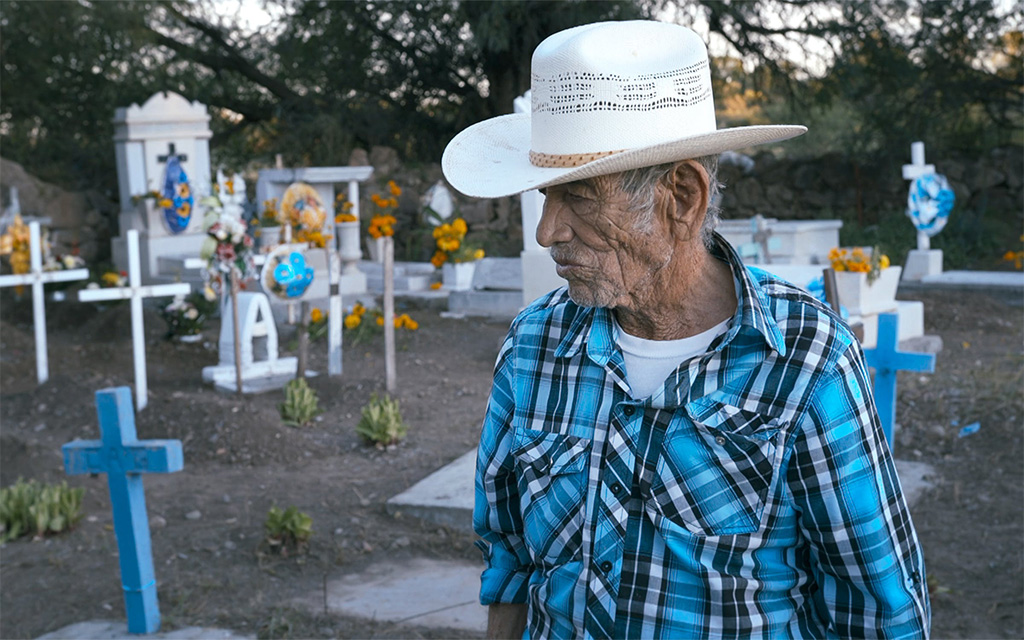 For Mother’s Day, the cheeky folk at The Brattle play Alfred Hitchcock’s “Psycho” (1960), with Anthony Perkins as the ultimate momma’s boy and innkeeper of the infamous Bates Motel – where taking a relaxing shower incites more than just a rousing Bernard Herrmann riff.

The penultimate DocYard screening of the season is Monday, with “Lo que dejamos atrás” (“What We Leave Behind”). Co-presented with the CineFest Latino Boston, Iliana Sosa’s film follows the saga of an 89-year-old Mexican man named Julián who takes a bus across the border to the United States annually to visit his daughters in El Paso, Texas. Because of age and border restrictions, “What We Leave Behind” marks his last trip, while also undertaking the incredible task of building an accessible abode for his blind son on home soil. Filmmaker Sosa will be in attendance.

As we’ve noted, and especially sad for the underserved documentary community, The DocYard goes on hiatus at the end of the month. Call me crazy, but might I suggest that The Boston Globe, owned by Sox owner John Henry and a proud exhibitor of docs in its GlobeDoc Film Fest, get behind the program with current sponsor The Lef Foundation?

It’s a one-night stand Wednesday with musician Nick Cave in “This Much I Know to be True.” Directed by Andrew Dominik (“Killing Them Softly,” “The Assassination of Jesse James by the Coward Robert Ford”), the documentary homes in on the creative relationship between Cave and longtime collaborator Warren Ellis.

The Brattle shifts gears with a unique collection of three films linked loosely by themes, director and a once “it” indie actress, Linda Manz, who died in 2020. Friday through next Thursday it’s a new restoration of Dennis Hopper’s “Out of the Blue” (1980), the spiritual sequel to “Easy Rider,” his 1969 debut capturing the rebellious angst of the era. (“Easy Rider” plays next week.) Hopper plays a truck driver who goes to jail after he drunkenly crashes into a bus, his daughter’s rebellious evolution while he is inside and their uneasy reunion when he’s released. On Saturday, The Brattle makes it a Manz double bill by screening a 35MM print of Terrence Malick’s visually and aurally mesmerizing “Days of Heaven,” in which a farmhand (Richard Gere) convinces his girlfriend (Brooke Adams) to marry the wealthy but dying Texas landowner they work for (Sam Shepard). The shots of the golden wheat field and staging of a locust swarm are stunning. Manz plays Adams’ daughter, who provides the dreamy, hypnotic voiceover. This is a must-see on the big screen.

Over at the Somerville Theatre there’s more hip, haute repertory programming with meta spins on cinematic icons Jean-Claude Van Damme and quirky Cantabrigian John Malkovich, who play fictionalized versions of themselves in “JCVD” (2008) and “Being John Malkovich” (1999). Many are more likely familiar with Spike Jonze’s wildly brilliant deconstructive take (written by “Adaptation.” scribe Charlie Kaufman) that made Malkovich’s brain an otherworldly portal traveled by John Cusack’s struggling puppeteer. (The fantastic cast also includes Cameron Diaz, Charlie Sheen, Catherine Keener and Octavia Spencer.) Mabrouk El Mechri’s alter-reality, semi-biographical take on martial arts bad boy Van Damme is nearly as sharp, though, with JCVD caught up in a fictional bank heist situation in which he reflects on his personal life during the standoff. El Mechri never really did much on par before or after. The films play Monday and Tuesday.

Wednesday’s “Hard Boiled Double Feature” pairing serves up John Frankenheimer’s gritty neo-noir “52 Pick Up” (1986), adapted from the Elmore Leonard novel by Leonard himself (the crime novelist penned only a handful of screenplays) and another crime drama that was largely dismissed at the time of its release, Christopher McQuarrie’s “The Way of the Gun” (2000). Frankenheimer (“Ronin,” “The Manchurian Candidate”) had largely been relegated to making B-films by this time in his career, which goes a long way to deepening his seedy, nasty exploitation play involving Roy Schneider’s married business man (to Ann-Margaret), who gets upended by a sadistic lowlife crook (John Glover, sublime) when he has an affair with an exotic dancer (Kelly Preston). McQuarrie, who won an Oscar for penning “The Usual Suspects” (1995), would make his directorial debut with this Peckinpah-esque border-town drama starring Ryan Phillippe, Benicio Del Toro and Juliette Lewis, then not helm a film for another 12 years. Despite “Way” not doing so well critically or financially, Tom Cruise was a fan of the film and worked with McQuarrie (script only) on “Valkyrie” (2008) – then tapped him to direct several “Jack Reacher” and “Mission Impossible” chapters. McQuarrie is also the scribe on “Maverick,” the sequel to “Top Gun” (1985) that opens in two weeks.

Two dark tales from director Abel Ferrara (“The King of New York,” “Bad Lieutenant”) play Thursday: “The Addiction” (1995) and “Ms. 45” (1981). The former, staring Lili Taylor and Christopher Walken, chronicles the struggles of a grad student bitten by a vampire trying to suppress her newly ignited lust for blood; the latter is a classic revenge flick with B trimmings in which a timid, mute woman, brutalized by men twice in one day, gets a gun and takes to the streets to get those who got her. On Friday, it’s “The Ring” starring Naomi Watts, the 2002 remake of the Japanese horror classic “Ringu” (1998), co-presented with the Slaughterhouse Society. It’ll do a “Slaughterhouse Preshow” that looks to be a lot of bloody cosplay and raucous “Rocky Horror Show”-style skits.

Mackenzie Mauro’s debut feature film is an apocalyptic, oneiric neo-noir. Life on Earth has three days before a climate change cataclysm, but Cam (Charles Ouda), an aspiring photographer and prescription drug dealer, is resigned to staying in New York and filling orders. When he heeds a customer’s plea for help, Cam is unaware that he is entering the crossroads between an underground criminal enterprise and local politics. If you’re coming for an apocalyptic rendering, you may feel cheated when this mumblecore indie switches gears to a more conventional film about an everyman in over his head; still, Mauro is an ambitious director who succeeds in making a gorgeous film. It also pays homage. Cam’s visions of death and danger are reminiscent of the killer’s delusions in Michael Mann’s “Manhunter” (1986); the first action sequence has a Brian De Palma energy, as Cam wields his camera and its flash as a weapon against some tough guys; when specters appear to Cam, it’s hauntingly reminiscent of “Donnie Darko” (2001); and the final shot pays tribute to the last scene in “Take Shelter” (2011). Afterward, viewers may clamor to buy the soundtrack, which feels eerily as if Cliff Martinez, the composer of Nicolas Winding Refn’s “The Neon Demon” (2016), made it – he didn’t. (Sarah Vincent) On Apple TV+ starting Tuesday.