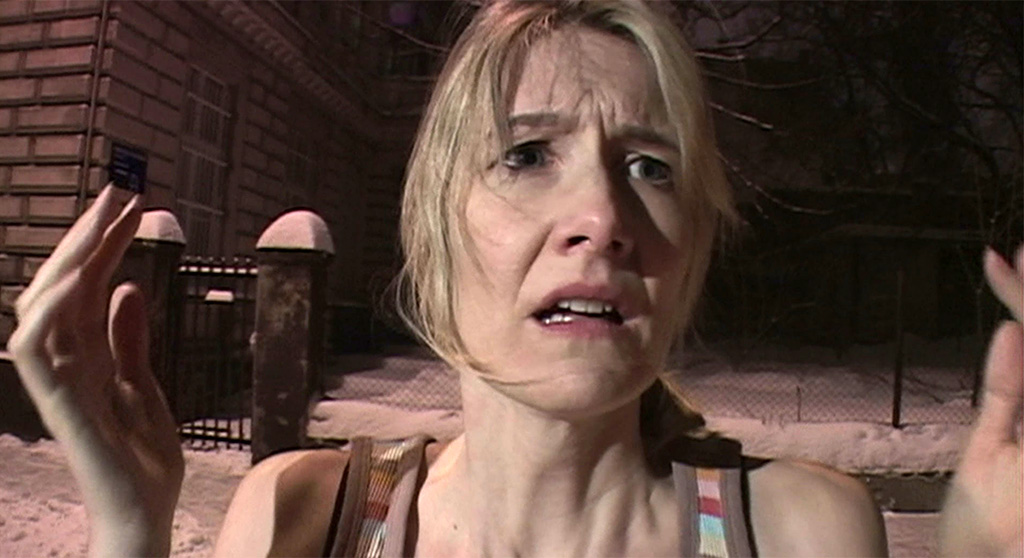 The Independent Film Festival Boston wraps up its phenomenal 19th run at The Brattle Theatre Monday. For tickets and information, see The Brattle website.

It’s “May the Fourth Be with You!” from Tuesday through Thursday, when the groundbreaking first three “Star Wars” films (Episodes IV, V and VI, in the grand scale) will screen: the original 1977 blockbuster helmed by Lucas himself (I refuse to call it “A New Hope”); the best of ’em all, “The Empire Strikes Back” (1980); and the trilogy’s closing journey into all things Jedi and furry, “Return of the Jedi” (1983).

A six-day run of the new restoration of David Lynch’s “Inland Empire” (2006) begins Friday. The film, lightly distributed and received indifferently when released (it grossed only $4 million, and here played just at The Brattle), has been reconsidered recently by those evaluating Lynch’s body of eerie, warped alter-realities. Fans of such atmospheric immersions as “Lost Highway” (1997), “Mulholland Drive” (2001) and “Eraserhead” (1977), in which you’re never 100 percent sure what’s going on, should relish this tale of an underemployed actress (Laura Dern) who begins to slide into the surreal as a new role begins to consume her and the realities of her life and that of her character begin to commingle. The restoration was done by Lynch himself, and the rest of the excellent cast includes Harry Dean Stanton, Jeremy Irons, Justin Theroux, Karolina Gruszka and Grace Zabriski.

If you can’t make it to Paris this summer, “Forgotten Films of the French New Wave” may be the next best thing. Working with curators at New York’s Museum of Modern Art, the good people at the Harvard Film Archive bring us a deftly curated series of rarely seen titles from the coolest of all film movements, La Nouvelle Vague. The program begins this week with “The Olive Trees of Justice” (1962), James Blue’s adaptation of the autobiographical novel by Jean Pélégri, who also stars as one of the film’s main characters (and played the policeman in Robert Bresson’s “Pickpocket”) shot amid the Algerian War; and two from the great Jean Rouch (“La Jetée” filmmaker Chris Marker is an adoring fan): “I, a Negro” (1958) and “The Human Pyramid” (1961). Other program highlights include early work by future greats such as Alain Delon (“The Unvanquished,” 1964), Anouk Aimee (“The Crimson Curtain,” 1953), and Lino Ventura (“Witness in the City,” 1959). Behind the camera we get early directorial efforts by Phillipe Garrel (“Les enfants désaccordés,” 1964), Robert Enrico (“An Occurrence at Owl Creek Bridge,” 1961), and Maurice Pialat (“Janine,” 1962). Others that intrigue are “America as Seen by a Frenchman” (1960) and “The Marines” (1957), filmed at the Marines training barracks on Parris Island, directed by François Reichenbach. Then there’s “The Game for Six Lovers” (1960), a “hedonistic marivaudage” with a title song by Serge Gainsbourg starring one of Claude Chabrol’s favorite actresses, Bernadette Lafont. Irreverent comedies are in the mix as well with “Snobs!” (1962) by maverick director Jean-Pierre Mocky (fitting last name for a satirist), and the short “An Overcooked Steak” (1960) by Luc Moullet, who jokingly appears disguised as Jean-Luc Godard tearing up a copy of Les Cahiers du Cinema – très meta. Two gems worth checking out on the big screen: George’s Franju’s “Judex” (1963), starring Edith Scob, which blends crime and fantasy while paying homage to Louis Feuillade’s original 1916 serial; and “Le combat dans l’île” (1962), directed by Alain Cavalier and starring Jean-Louis Trintignant and Romy Schneider, depicting an extreme right-wing group preparing an attack (inspired by the one aimed at Charles de Gaulle). The series runs through June 19. For a listing of films, showtimes and tickets, visit the HFA’s website. (Federico Muchnik)

As at The Brattle, the IFFB is still in gear and wrapping up early this week at the Somerville Theatre. Also ending this week is the “Face/Off” series pairing films starring Nicolas Cage and John Travolta, and what better way to cap it off than a showing of the 1997 John Woo-directed actioner that stars the iconic actors and inspired the program in the first place? Cage and Travolta’s characters (a terrorist and an FBI agent) get face transplants to look like each other, so you have Cage playing Travolta in Cage’s body and vice versa. “Face/Off” plays Tuesday.

Queuing up Wednesday is a crime aficionado summer treat, the “Hard Boiled Double Features” program curated by local film critic Sean Burns. He and theater manager Ian Judge came up with the series idea – “pungent, brutal little crime movies,” per Burns – when talking about two such movies (“Point Blank” and “Get Carter”) that the theater had run a few years back. With the reopening of theaters there’s been a resurgence in the desire for repertory programming, Burns said, pointing to the 250-plus attendance of a recent screening of “Pulp Fiction” as part of the “Face/Off” series.

The lineup is choice, beginning with the you-can’t-stream-it-anywhere 1985 thriller with one of the greatest car chases ever, “To Live and Die in L.A.” from director William Friedkin (“The French Connection,” “The Exorcist”) paired with another great Los Angeles car chase flick (“neon Los Angeles automotive antics,” as Burns put it in conversation), “Drive” (2011), starring Ryan Gosling as a getaway driver with rigid personal boundaries. The sound editing in both films is phenomenal.

Others on the slate paired to “overlap in interesting ways” include two with Walter Matthau on May 18: “Charley Varrick (1973), directed by Don Siegel (“Dirty Harry,” “Invasion of the Body Snatchers”); and “The Taking of Pelham One Two Three” (1974). In “Varrick,” Burns said the character “accidentally rips off a money-laundering joint and spends the rest of the movie playing every side against the middle to try and get away clean with the cash.” “Varrick” has a great opening car chase, and its closing set piece pits a car against a crop duster. No computer-generated explosions here, folks, just a lot of very risky stunts. Looking for a prestige noir? Stanley Kubrick’s “The Killing” (1956) is nothing to sneeze at (May 25). Tagging it as simply a racetrack heist gone wrong would be unfair, as Kubrick weaves together a “Rashômon”-like story told from each gang member’s point of view and casts it to the winds on an airport tarmac. It’s a brilliant bit of nonlinear storytelling led by Sterling Hayden playing the beautiful loser and brains of the operation. The other prestige noir on the bill, “Touch of Evil” (1958), directed by and starring Orson Welles (June 15), is a must-see on the big screen – it’s shot largely with wide-angle lenses. The gorgeous black-and-white cinematography by Russell Metty, who won an Academy Award for filming “Spartacus” (1960), draws you in to the shambolic world of a U.S.-Mexico border town. The film was actually shot in Venice, California, and stars Welles as a corrupt lawman running out of Mondays and Charlton Heston as the man with different lives on each side of the border.

If watching films on celluloid is still your thing (it’s still ours), the series has a significant number of titles showing on old-school reels. There’s Elmore Leonard adapting his novel “52 Pickup” (1986) with director John Frankenheimer (“The Manchurian Candidate,” “Seconds”) and starring Roy Scheider and Ann-Margaret as a husband and wife caught up in a brutal extortion scheme (May 11), as well as noir pulp from John Huston (“The Maltese Falcon,” “The Dead”): “The Asphalt Jungle” (1950), with Marilyn Monroe making her film debut (it screens with “The Killing”). There’s also a quirky 2005 Robert Downey redemption project, Shane Black’s “Kiss Kiss Bang Bang,” with “The Ice Harvest,” directed by Harold Ramis and co-starring John Cusack and Billy Bob Thornton (June 1). Working the same-date theme, there are two noirish 1975 curios: Arthur Penn’s “Night Moves” starring Gene Hackman, just off Francis Ford Coppola’s “The Conversation” (1974), and an eye-grabbing casting of Catherine Deneuve and Burt Reynolds in Robert Aldrich’s L.A. crime drama “Hustle,” for which the tag line is, fittingly, “they’re hot” (June 1).

Estonian film director and LGBTQ activist Peeter Rebane makes his feature directorial debut, an adaptation of Sergey Fetisov’s memoir, “A Tale about Roman.” The uneven film provides little background beyond saying that male sexual relationships were illegal at the time, and most viewers may be unfamiliar with Fetisov’s stature as a theatrical legend in the former USSR. Brit cowriter/actor Tom Prior is decent as Fetisov, an inexperienced man eager to leave mandatory military service at a Soviet-occupied Estonian Air Force base in 1977. Next to Roman (Oleg Zagorodnii), who makes a striking impression as the dashing fighter pilot, Fetisov does not stand out as a magnetic, rising star – he’s just a lovestruck everyman. The first half of the film is torn between being a forbidden romance and a Cold War action-cum-romance like “Top Gun,” with dashes of bootcamp torture. The film finds its footing in the second half when Fetisov pursues acting in cosmopolitan Moscow and the young men risk their reputations and scramble for cover stories during their on-and-off six-year relationship. Rebane shows visual potential by capturing his homeland’s beauty against stark, fascist architectural design and depicting the occupied’s irrepressible joie de vivre in the face of oppression. (Sarah Vincent) At Landmark Kendall Square Cinema, 355 Binney St., Kendall Square.

Emmanuel Marre and Julie Lecoustre’s first feature is a tight, intimate affair about a junior-tier flight attendant at a small, no-frills airline where she confronts sexism, controlling corporate policies and her own skeletons. As Cassandre, Adèle Exarchopoulos, excellent in “Blue is the Warmest Color” and even more so here, gives us a deep character dive that feels lived in. At first the implied attitude of the title makes perfect sense, as Cassandre jets from the Azores to various European stops, partying into the night, engaging in Tinder hookups and being schooled by higher-ups to shave more regularly and sell more duty-free goods and in-flight booze – but then there are hints of death and a fractured family life. The film, like Exarchopoulos’ performance, feels more documentary than slick; the cinematography is simple, but gorgeous. (Tom Meek) On Mubi.