Alternatives to standard armed police response will be readied quickly after a $2.9M budget vote 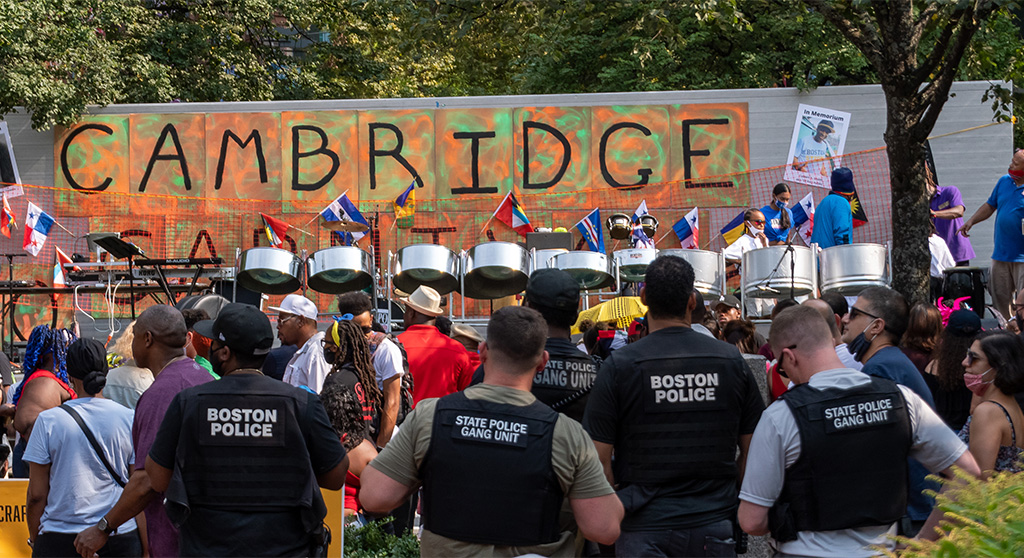 Alternatives to standard armed police response will be readied quickly after a $2.9M budget vote

A wall of police take in entertainment at the Cambridge Carnival held Sept. 21 in University Park. (Photo: Tyler Motes)

The city’s new Community Safety Department is on track to be funded with $2.9 million as of July 1, when the next fiscal year begins.

Job listings for the initial six-person staff would then be posted immediately “so we can get up and running as quick as possible,” City Manager Louis A. DePasquale said at a Tuesday budget hearing. Staff is also working on the purchase of offices – “completely separate from the police department” – that DePasquale expected to be announced shortly.

The department, encompassing an unarmed Cambridge Alternative Response Program for crises that don’t need police, will be “the premier response department of any city anywhere,” DePasquale said. Its peer-to-peer support and crisis specialists will have mental health and social services backgrounds and will not be “mandated reporters” required to act legally on such things as suspected abuse, officials said. Mandated reporting is known to inhibit victims from coming forward.

It emerged from a task force led by city councillors Marc McGovern and E. Denise Simmons and research by director of emergency communications Christina Giacobbe into 15 or more such programs already running, and comes with the support of the city’s police commissioner and Human Services director, DePasquale said.

Part of the department’s role is to connect those who contact it with “wraparound services” for everything from conflict resolution to providing food and clothing, which Giacobbe said could begin as soon as next month with funding approved. Around $1.7 million of the budget is for outside assistance that Giacobbe suggested could include a community group called Heart.

The Holistic Emergency Alternative Response Team was formed out of a community-run process parallel to the councillors’ task force – one endorsed by the council – and was proposed as a program that would have been essentially a people’s version of the Cambridge Alternative Response Program; it might now rely on the city program for its livelihood.

Stephanie Guirand, a founder of Heart, made a plea Monday for councillors to ensure that federal Covid aid was directed its way. “You can see that we’re in this for the long haul,” Guirand said, noting that Heart was in the awkward position of advising fledgling programs in other cities without having a solid footing of its own. “If you can’t allocate [federal funds] to us, we ask you to help us find other resources.”

Quinton Zondervan was the only councillor out of nine voting Monday to try to pressure city staff to allocate federal funds to Heart. But the program came up again Tuesday at the budget hearings with an acknowledgment by Zondervan and chair Patty Nolan of the “tension” between the two programs. “The city has been very generous with its time and having multiple meetings with them … I wanted to understand whether it was anticipated that there would be some collaboration with programs including specifically Heart,” Nolan asked city staff. “I think it’s pretty important for us to acknowledge that organization explicitly, [though] frankly there’s tension all around about how it is that we might approach it.”

Giacobbe assured councillors that Heart was among the relationships built over the past year with the knowledge “we can’t do this work alone. We hope Heart will work with us. And we believe that we’re getting close to really understanding each other.”

The department’s budget is likely to grow over time, but how much won’t be known immediately. In its first year, funding is coming out of the city’s free cash reserves rather than its tax rolls. The department “was not anticipated in any of our projections,” DePasquale said. “In the following year, it’s already added to our projections and would then come from taxes.”

The city’s police department already makes an effort to take alternative approaches to jails and judges, “connecting people to services and improving outcomes for our most vulnerable,” police commissioner Christine Elow said at her department’s Tuesday budget hearing. “When I think about what we’re doing around policing, particularly in our black and brown communities, our focus is on engagement.” The city’s safety net collaborative has brought as much as an 80 percent reduction in juvenile arrests, she gave as an example.

“For me, it’s not about the police vs. Community Safety vs. Heart,” Elow said.

Though Zondervan said he preferred the alternative approach to emergency response – “our model of policing is out of date, and what we need to do is not continue to invest in it” – a reduction in funding was not being considered. The $73 million police budget was affirmed on its way to a vote by the full council.

The department has 188 patrol officers but around 20 vacancies, and Elow said that when those were filled, community engagement would be a priority. “I’d love to expand our walking patrols,” she said.

Policing is the biggest individual line item for department budget appropriations (though dwarfed by the $232.4 million proposed for schools), but looks different broken down on a per capita basis, Elow said. The budget includes items such as pensions and health insurance that departments in cities such as Boston keep separate, and when those are removed the budget looks 30 percent smaller – less well-funded than Boston and a little bit better-funded than Somerville.

The budgeting is unlikely to change much even after the Community Safety Department is in place, but “it’s really important for people that do not have a trusting relationship with the police that they have an alternative to call,” Elow said. “It is going to be a very delicate balance. There’s going to be lots of meetings, and lots of debriefings.”

The Public Safety Committee meets at 3 p.m. Wednesday to discuss a new 988 program – that’s what callers should dial for crises such as suicidal thoughts – and potentially other issues around how to dispatch emergency services. Zondervan, who runs the committee, said he was open to scheduling another hearing around the Community Safety Department.