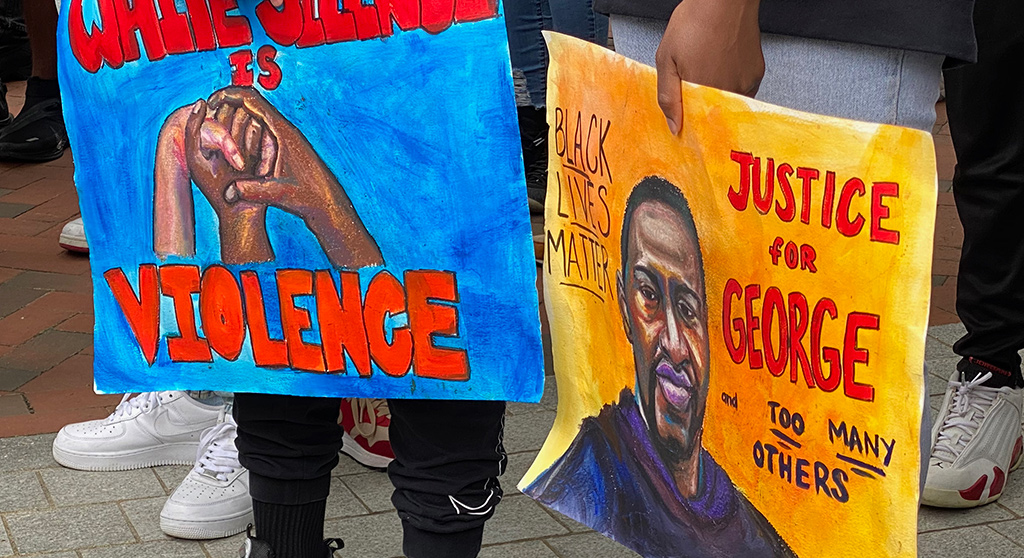 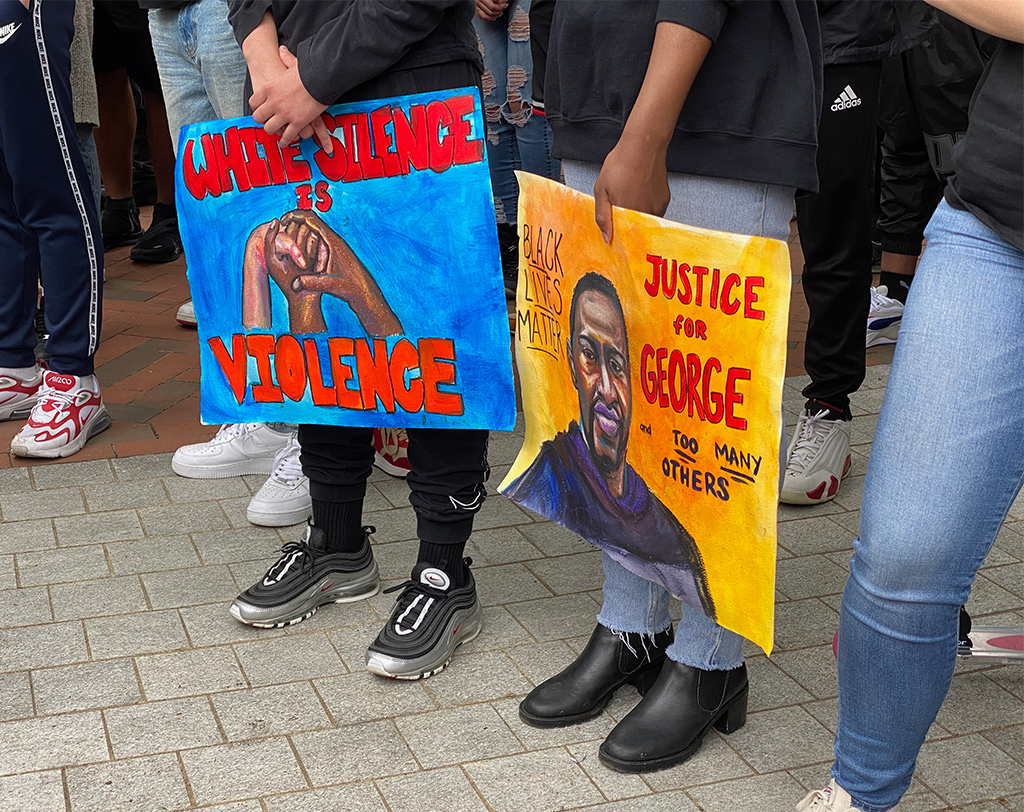 Signs at a June 7 protest on Cambridge Common capture the spirit leading to proposals that can change the nature of policing in Cambridge. (Photo: Marc Levy)

On the one-year anniversary of the police killing of George Floyd in Minneapolis, two proposals to change the nature of public safety were embraced Monday by Cambridge’s City Council, with a formal report by a city task force likely to be handled by the Mayor’s Office with the full membership, instead of in a committee.

Two groups shared a rough goal in creating what the task force calls the Cambridge Department of Community Safety, which would be separate from the police department and emphasize an unarmed, social services approach to day-to-day crises.

The handling of a parallel proposal for ‌a Holistic‌ ‌Emergency‌ ‌Alternative‌ ‌Response‌ ‌Team will be decided in two weeks, when the council reconvenes after the Memorial Day holiday; though it came before the council at the same time as the report from the city’s Future of Public Safety Task Force, councillor Quinton Zondervan opted to use his “charter right” to delay conversation.

“I do support this order, but I’m actually going to exercise my charter right,” he announced, explaining after the meeting that he took the step to ensure councillor Dennis Carlone, a cosponsor of the motion, was present for the conversation. Carlone left the meeting early saying he hadn’t been feeling well.

The two orders look likely to be merged for discussion anyway. The Heart order, written by councillor Patty Nolan with Carlone and councillor Jivan Sobrinho-Wheeler, asks for the task force “to participate in the [Heart] coalition’s collective process and to establish a final implementation plan.”

The citizen coalition included representatives from The Black Response, the Cambridge Residents Alliance, Cambridge DSA, Our Revolution Cambridge, Sunrise Cambridge, The Democracy Center, YWCA Cambridge, the Muslim Justice League, SURJ Boston, the Material Aid and Advocacy Program and Blackyard, as well as some from farther away, including Cahoots/White Bird Clinic in Eugene, Oregon; and, in California, Mental Health First Sacramento and several out of Oakland: Urban Strategies Council/Mobile Assistance, the Anti Police-Terror Project and the Community Responders. The task force included 14 members from the community.

Either Heart or the Cambridge Department of Community Safety would work to decrease arrests while “increasing connections to critical housing, addiction and other services, and ensuring that Public Safety feels safe for all residents,” in the words of task force members. The two groups even shared some membership as the task force met roughly weekly from February into May.

But while the task force was charged with creating a program within city government, if apart from the police department, the Heart proposal is for a nonprofit that sits outside of the city.

“There’s a lot of similarities between what the task force came up with and what the Heart program came up with. They approach the issue a little bit differently. But this is, I think, a lot of great work,” said councillor Marc McGovern, who was appointed by the city manager as a co-leader of the task force with councillor E. Denise Simmons.

Simmons agreed: “This was an extraordinary effort with extraordinary work put into it … I believe that we are just an incredible city that this kind of thing can happen, and only something good will come from it.”

Straight to the Mayor’s Office

McGovern was enthusiastic enough about the proposal to want at least the one from the task force – because with the Heart proposal charter-righted, it couldn’t be discussed – handled by the Mayor’s Office instead of sent to committee.

Even if the proposals went to hearings held jointly by the Human Services and Public Safety committees led, respectively, by McGovern and Zondervan, “not every councillor would be able to be part of those discussions and to vote on those discussions,” McGovern said, suggesting to Mayor Sumbul Siddiqui that “the city manager work with you, Madam Mayor, to lead the process and to lead the community conversation so that all members of the council could be at the table to discuss this.”

Simmons agreed the proposals should go to a “neutral body” instead of to “a committee which some might see as biased.”

Zondervan said he took offense, and that the committee approach wouldn’t have to prevent anyone from talking or taking part in major votes. But the mayor accepted McGovern’s suggestion and vowed to work with the task force proposal, which on a motion by McGovern was placed on file to be handled later. (Previously in the meeting, McGovern had criticized Zondervan for suggesting that a different issue be placed on file for a committee to pick up because “Let’s be clear: Placing something on file basically kills it.” Not in every case, apparently.)

Floyd was killed May 25, 2020, in Minneapolis in yet another of America’s innumerable arrests of black people resulting in nonsensical deaths – and when the nation took to the streets in a summer and fall of protest and legislative proposals, there were many names to be called out; Ahmaud Arbery and Breonna Taylor were only the most recent and prominent alongside Floyd. But his is the only one that surprised the world with an outcome in which the police officer who knelt fatally on his neck has been convicted of murder and manslaughter.

With police killings typically going unanswered nationwide, Cambridge was just one city among many debating ways to “defund the police.” In June, councillors called for studying an alternative Public Safety Crisis Response System, asked formally to see the city police department’s list of equipment to judge for themselves whether it was over-militarized and called for hiring that emphasized human services at the expense of police.

The Cambridge Police Department is taking part in demilitarization discussions after some initial hiccups, and city staff showed during recent budget hearings that human services positions were some of the only ones filled during a pandemic hiring freeze.

The task force was formed in January as proposed by vice mayor Alanna Mallon with cosponsors Siddiqui and councillors Simmons and Sobrinho-Wheeler.

“When calls come in around housing or homelessness, mental health and addiction, grief and loss, suicide prevention and more, an unarmed response team may be better able to handle and de-escalate than a police officer,” Mallon said. “Declaring racism as a public health emergency is just pretty words on paper if we’re not doing the hard work of reimagining a more racially just community – and that means ensuring that public safety is safe for all.”