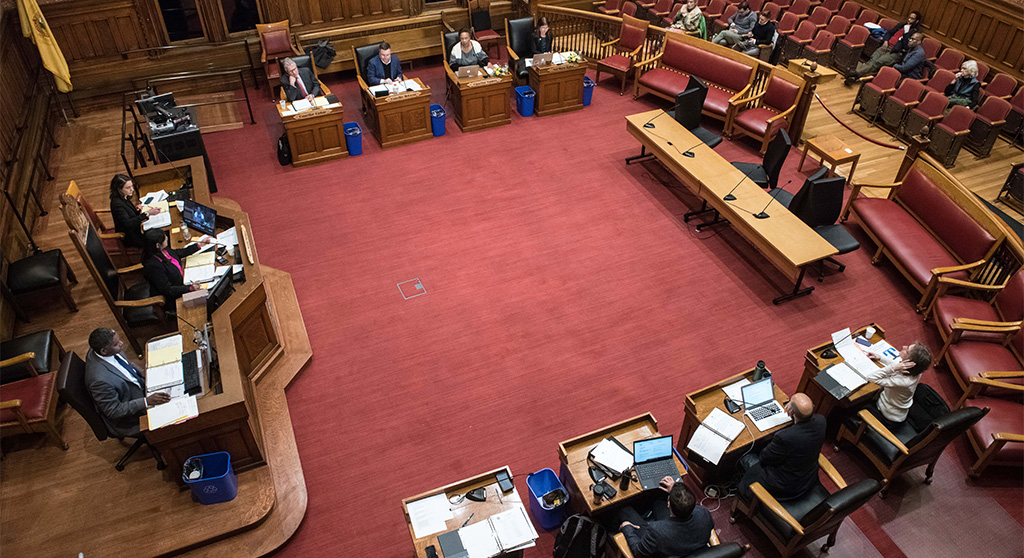 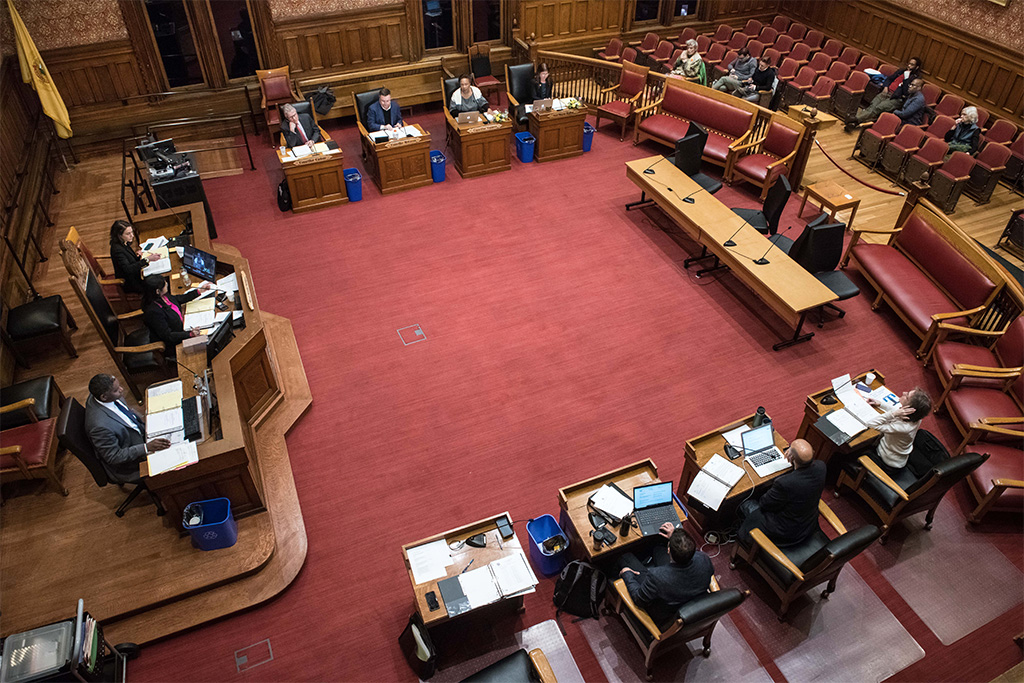 Looking down into the City Council’s Sullivan Chamber in 2020. (Photo: Derek Kouyoumjian)

More than a dozen city departments drew questions from city councillors during Tuesday’s hearings about a proposed $787.9 million budget for the 2023 fiscal year, which starts July 1. (There were 32 offices that could be called in for this first round of hearings, and more coming Tuesday.) One topic getting extended conversation was a new Community Safety Department expected to provide an unarmed response to crises from drug problems to suicide threats. Here are a few other things that jumped out from the day’s discussion, which was chaired by councillor Patty Nolan.

Getting a feasibility study to explore options for city-owned broadband Internet has taken years, as retiring city manager Louis A. DePasquale had to be dragged into doing it by a frustrated City Council. Now that a study is underway, councillors were surprised to see a digital equity and broadband project manager (to earn $174,892 annually) was listed as being in the City Manager’s Office. The person would actually sit in the Information Technology Department but is officially under the city manager as a way of “showing the importance of this position,” director of communications Lee Gianetti said.

Councillors were not immediately sold. “We have so many other areas that are critically important, and we don’t put them in a public information office [and this] is something that is so deeply technical,” Nolan said, encouraging consideration of “a different reporting relationship.” That led DePasquale to comment that the council has said they wanted the most important positions to be placed within the City Manager’s Office. “We’ve put a lot of thought and effort to this, and I’m a little surprised that there was a feeling this isn’t the right department,” DePasquale said. Then, in a reminder he is leaving office July 5, “You could have that discussion with the new city manager.”

The housing liaison could evolve into an Office of Housing Stability

The housing liaison position first budgeted in the 2019 fiscal year helps residents fight evictions, find affordable-housing opportunities and handle displacement from fires or the sale of the building they rent in. But having grown quickly to a staff of four, it “increasingly seems like” one of the offices of housing stability found in cities such as Boston and Somerville, councillor Quinton Zondervan said. The difference remains that housing aid and services in Cambridge also comes through the Multi-Service Center and Community Development Department, liaison Maura Pensak explained – but that just opened the path to Zondervan asking if there would there be any benefit to consolidating all those efforts. It turns out he’s not the only one. “I, along with others, have been thinking what is the best structure, and I think it can go many ways,” Pensak said. It is “kind of in the plans to at least have some conversations about it in the coming year.”

Conversations about police accountability measures such as body cameras began in earnest amid the Black Lives Protests in the summer of 2020, but Cambridge hasn’t implemented them – and they’re again not in the budget. Councillor Marc McGovern asked police commissioner Christine Elow where the matter stood. “I am such a fan of body cameras. When I think about the transparency and accountability, that would be such a benefit for us,” Elow said. She referred to the October arrest of a shoplifting suspect in Central Square in which a video captured a moment in the incident but not the context. “If we had body cameras at that time, we would have got that whole interaction.” There will have to be strict accountability about when the cameras are off or on, she said, but “I absolutely am passionate about engaging in that conversation with the council when the time is appropriate … it really is up to the City Council to engage us.”

McGovern said he would be happy to revive the conversation, as he was under the impression even the city’s union officials support the cameras. “In most places, that’s not the case,” he said.

Cambridge is safer than many communities, businesses and schools from ransomware and other online attacks that can financially cripple and even kill. (Illinois’ Lincoln College closes this week, felled by the pandemic and an Iranian ransomware attack, The New York Times says.) “I would rank Cambridge very high compared to many of our other cities and towns,” said Patrick J. McCormick, the city’s chief information officer, citing municipal use of multifactor authentication, stronger password protections and the creation of “an operations center [that] will help actively look for threats as they emerge day-to-day against our various systems.” Ninety percent of staff are now trained to recognize threats and avoid phishing scams and other dangers, McCormick said – “an unprecedented level of training.”