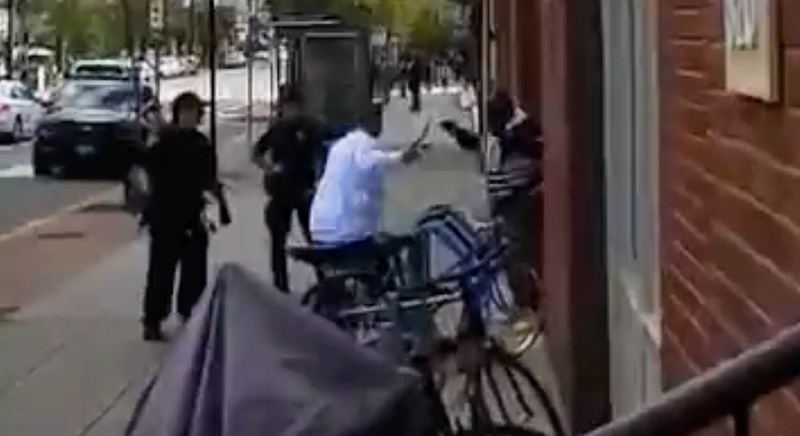 A passerby leaped from his car to join police officers in a confrontation with a man in Central Square on Sunday, and city councillors say they are awaiting an official version of events.

In a 42-second video that councillor Quinton Zondervan posted at 1:17 p.m. Monday, two officers and a third man are seen by the Central Square YMCA following a fourth man along the wall and yelling at him to get on the ground. An officer is seen striking him once on the legs with a baton. The person shooting the video also urges the man to get on the ground to stop the situation from escalating. The man tumbles to the sidewalk, where he is urged to get on his stomach for handcuffing.

The passerby, who can be seen clearly in a white shirt compared with two uniformed officers, is seen threatening the man with his own baton. When the man is on the ground the passerby rushes forward to help officers secure him.

Councillors want to know who the man is, and what he was doing there.

“Who is the man in white, and why was he allowed to join the violence?” Zondervan said in his tweet, following up at the Monday council meeting with similar questions.

The man who was being followed by police is suspected of shoplifting candles from Walgreens, and was also pepper sprayed in the clash with police; he was taken to a hospital after the video ends, Zondervan said.

Though Zondervan refers to the clip as being “a very disturbing video [that] makes me sick to my stomach to watch,” councillors agreed there was not enough information in it to draw real conclusions. And councillor Marc McGovern said information from a preliminary conversation Monday with acting police commissioner Christine Elow conflicted with Zondervan’s initial take.

“The man in the white shirt is not affiliated with the Cambridge Police Department, he was not allowed to participate. They were actually trying to get him to stop. We don’t know where he came from. He was a passerby, not a police officer,” McGovern said.

At one point, though, the passerby is close to the suspect and looking like he’s about to strike at the upper body with his baton while the officers hang back.

Police spokesman Jeremy Warnick said Monday that there was context and background missing from what had been posted online about the incident, but he – and councillors – expected more information to be released Tuesday, including whether the suspect and police clashed before the video began.

A late policy order by Zondervan and councillor Jivan Sobrinho-Wheeler from Monday’s council meeting asked for an accounting no later than Nov. 8, saying it was unclear from the video “why the violent force was necessary, what probable cause there was for the arrest and how the situation was ultimately resolved.” The text of the order drew a connection between this incident and the kinds of violence that sparked Black Lives Matter protests over recent years.

The order drew council support, but with concern that it was inflammatory considering how little was known about the Sunday incident.

“We always want to find out if there are any [police] behaviors that would be called into question,” councillor E. Denise Simmons said. “I certainly will support this order, even though I do have some problems with the way it’s worded because it presumes information that my colleagues and I have not seen. I certainly know that my colleague would not misrepresent the truth deliberately, but it’s important that we see the evidence.”

An investigation is “warranted and required,” McGovern said.