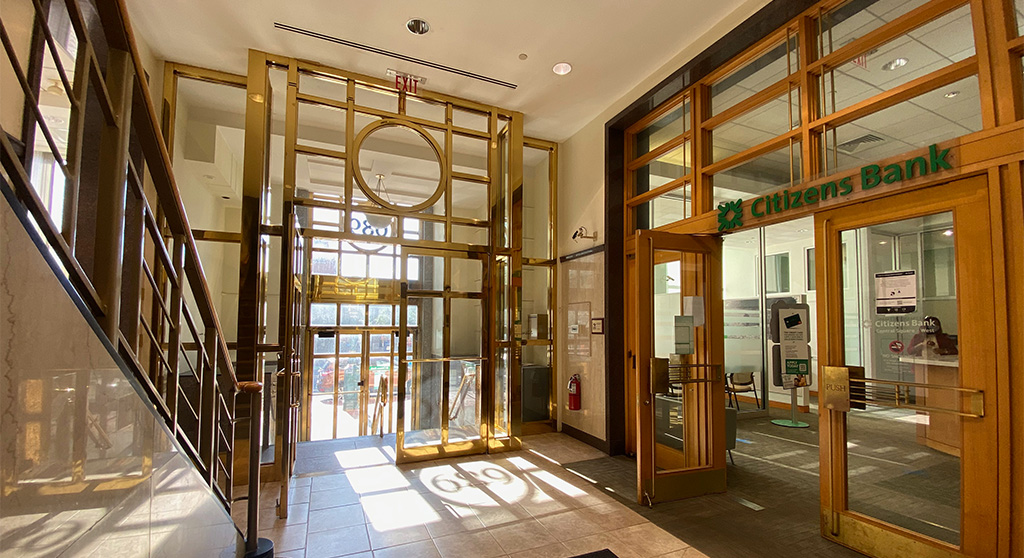 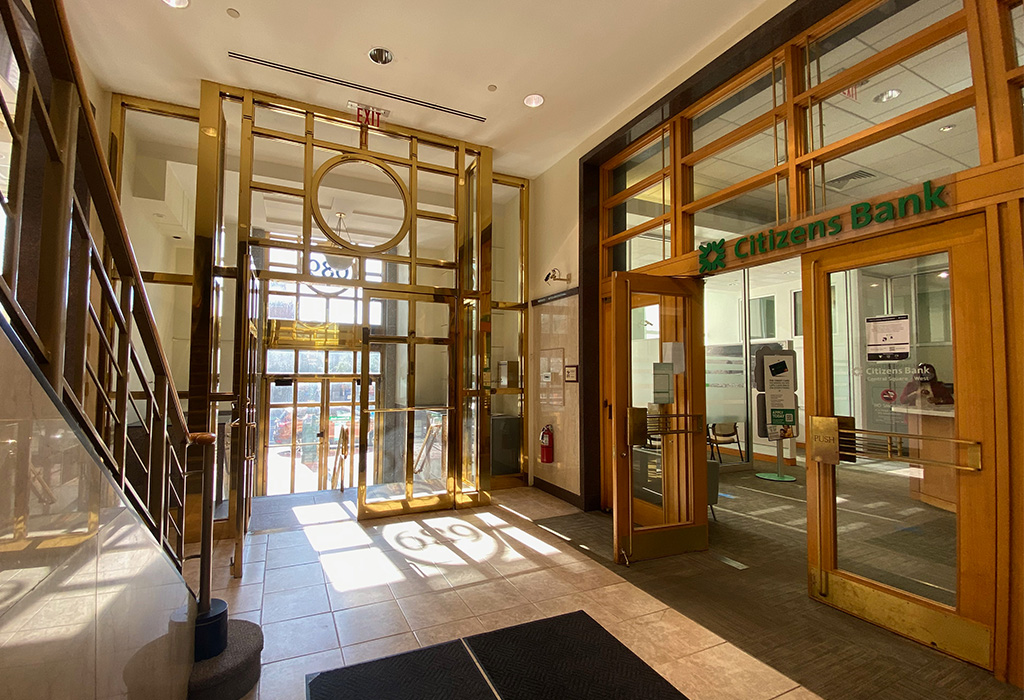 The lobby of the Cambridgeport Savings Bank Building, which is expected to become municipal office space. (Photo: Marc Levy)

City Council, 5:30 p.m. Monday. Whoa. The remaking of the Tobin Montessori and Vassal Lane Upper Schools campus that has received $250 million in appropriations will cost $49 million more, for a $299 million total. The causes, as the city manager explains, are “enhanced sustainability and resiliency features, latent site conditions, supply chain shortages and higher-than-average construction escalation within the public bidding domain.” The coronavirus pandemic added to costs by delaying the relocation of Tobin students for a year from the initial start date, though the project is still expected to be complete in the fall of 2025. The site will include a 359,100-square-foot building and underground parking garage for the schools, a 539-seat auditorium intended to be “a citywide resource,” the Department of Human Service Programs Preschool and After School Programs as well as Special Start and full-immersion Autism Spectrum Disorder programs.

The city also intends to spend $14.5 million on the the circa-1904 beaux-arts style Cambridgeport Savings Bank Building in Central Square at 689 Massachusetts Ave., now owned by the Unitarian Universalists, but some may be disappointed to hear that its 30,227 square feet (with basement space) is designated as future “municipal office space and all uses accessory thereto” and may not fit a community center, museum or other uses that once seemed possible.

The Second Annual Cycling Safety Ordinance Progress Report arrives at an interesting time, just after a group has filed a lawsuit to immediately stop the city from adding more protected bike lanes as the law requires and remove any existing lanes that took away parking spaces. The report notes that though Year 2’s implementation of the law’s call for separated bike lanes dropped to 2.1 miles from the first year’s 4.1, it included design work that will allow Year 3 installations to go to 4.2 – barring the lawsuit’s success – and see the start of discussion around a Hampshire Street corridor. In further interesting timing, councillor Quinton Zondervan seeks to expand “Riverbend Park” geographically (maybe from Amesbury Street to Land Boulevard) for runners, bicyclists and others over one or more weekends in the summer and fall to see its effect on traffic. This comes after some Riverside residents have complained that creating the park by closing Memorial Drive on Saturdays (an expansion from its traditional Sundays) has caused extreme traffic backups on other streets.

City staff must set up a way to notify all neighbors, not just property owners, of construction or demolition, councillor E. Denise Simmons says, following up on the previous week’s order looking to standardize and improve how the city alerts residents to its work and gets their input on it. Councillor Marc McGovern has an idea that’s more fun, if bittersweet, to promote: Pit-A-Palooza, a celebration from 5 to 10 p.m. June 25 – with live music, performances of “Rocky Horror” songs, food and a beer garden – to mark Pit Rat Day in Harvard Square. Renovations to the plaza around a MBTA station headhouse means there will be no more “Pit,” a sunken area built in 1982 for public gatherings that “became home to a ragtag group of young people from Cambridge and the surrounding area who, because of their choice in music and of dress, were often outsiders in their own communities.” “Although we will lose the physical appearance of The Pit, this area will continue to be a welcoming place for young people to gather,” McGovern said.

Finance Committee, 3 to 5 p.m. Tuesday. This committee run by city councillors Dennis Carlone and Patty Nolan will get an update on federal Covid aid known as the American Rescue Plan Act. The city is getting $88.1 million overall and about $70 million is already committed, councillor Patty Nolan said. The committee meets at City Hall, 795 Massachusetts Ave., Central Square. Televised and watchable by Zoom video conferencing.

Economic Development & University Relations Committee, 10 a.m. to noon Wednesday. This committee run by city councillor Paul Toner looks at the “Circular Cambridge” report, which Community Development put together with the help of Dutch consultant Metabolic toward creating a more circular Cambridge economy – that is, decreasing waste and keeping money within the city by buying and hiring local. The committee meets at City Hall, 795 Massachusetts Ave., Central Square. Watchable by Zoom video conferencing.

Human Services & Veterans Committee, 9:30 to 11:30 a.m. Thursday. This committee run by city councillor Marc McGovern hears from the Department of Human Services and the co-directors of the Out of School Time Initiative about after-school and summer programs running now and what should be developed for the future. The committee meets at City Hall, 795 Massachusetts Ave., Central Square. Watchable by Zoom video conferencing.

East Cambridge preservation and development walking tour, 6 to 7:30 p.m. Thursday. East Cambridge is one of the oldest and most densely settled neighborhoods in the city, with early- to mid-19th century architectural styles mixed with neighborhood shopping streets, but property owners can face pressure for development that can affect significant buildings. Charles Sullivan and Eric Hill of the Cambridge Historical Commission will discuss the ongoing proposal to establish a neighborhood conservation district in the area during a free tour starting at Timothy J. Toomey Park, Third and Roger streets, East Cambridge.