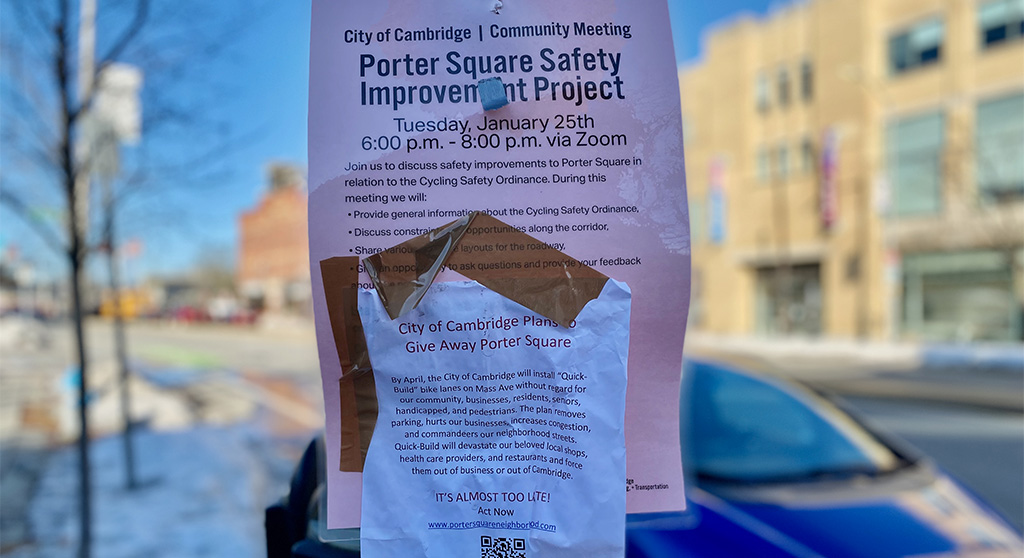 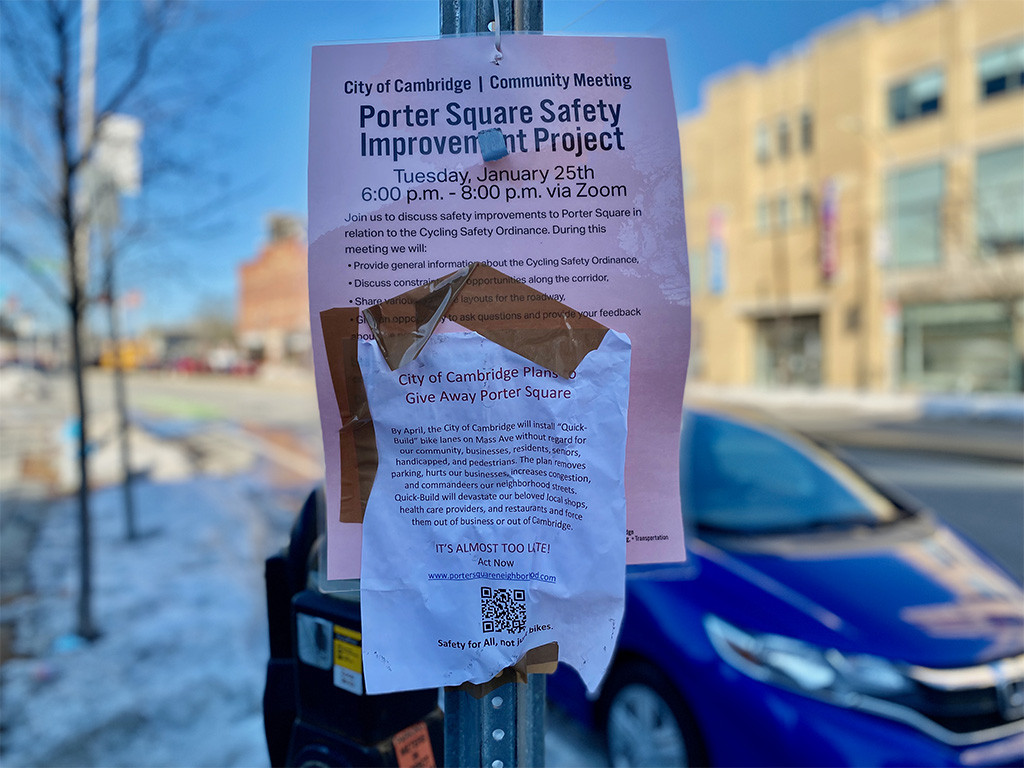 A group called Cambridge Streets for All said it filed a lawsuit against the city Friday over parking-space changes brought on by the Cycling Safety Ordinance. It seeks to immediately stop the city from adding more protected bike lanes as the law requires and remove any existing lanes that took away parking spaces.

An email from the group described a situation in which “storefronts can’t serve customers because there is nowhere to park, where quiet side street neighborhoods will become de facto parking areas and loading docks and where medical patients won’t be able to access the offices of their providers.”

The actions seeks “declaratory and injunctive relief” and are intended to make the city “rescind, restore and prevent the additional implementation” of the bike law, which was passed in 2019 and amended in 2020 to set a timeline for the implementation of protected bike lanes citywide.

The lawsuit was filed in Middlesex Superior Court, according to a publicist working for the group.

The city does not generally comment on pending litigation, but spokesperson Lee Gianetti said Friday that the city solicitor was reviewing the complaint “and will diligently represent the city’s interests in this matter.”

The Cambridge Bicycle Safety group was also contacted for comment. Nate Fillmore, a member, said he’d heard a lawsuit was in the works, but as of Friday, had not seen a copy. “It sounds like there’s a small group of people here who are extremely upset about changes being made. But we know that broadly, people in Cambridge are supportive of the bike law,” Fillmore said. “And we know that there’s lots of research showing that protected bike lanes are safer than traditional bike lanes or no bike lanes, and also that making these kinds of changes tends to improve the business environment.”

Cambridge Streets for All is made up of store owners, medical offices, restaurants and neighborhood residents, according to the group’s email. Retailers north and south of Porter Square and a dentist’s office in North Cambridge have been the most vocal at City Council meetings over the past months in citing harm from lost parking spaces on Massachusetts Avenue – to which one solution has been to add business-hour metered spaces on stretches of side streets near the avenue.

The city has taken several steps to slow some aspects of the bike lane rollout and mitigate where parking spaces have been or will be taken away – but it is not enough, the group suggested.

“Despite a series of packed City Council meetings, the message from residents and businesses that they are being harmed has continued to fall on deaf ears. CSA determined that taking legal action against this ordinance was our only recourse to be heard,” said Violette Bakery owner Lee Jenkins, whom the email identifies as a group board member. “They didn’t consult local businesses and residents when they drew up these plans in the middle of a pandemic, and they’re not listening to us now. We believe improved bike lane access to be an excellent goal, but not when the parking for business customers and staff, as well as for neighborhood residents and patients of local medical providers is being completely gutted, which will clog side streets where people live.”

As part of the Middlesex court filing, the group asked in a motion for “impoundment” that the names of people providing affidavits be kept secret. “Certain members of the cycling community in Cambridge have engaged in a campaign of harassment and intimidation against the persons filing affidavits in this matter for their opposition to the Cycling Safety Ordinance. Most of the harassment takes the form of negative comments on social media, as well as threatening letters and harassment of customers,” the filing says.

The impound request was first reported by the website Universal Hub.

One of the people involved in the suit, John Pitkin, sued the city in 2019 over changes to the Inman Square streetscape spurred by the death of bicyclist Amanda Phillips three years earlier. The Inman Square suit was unsuccessful.

The bike lane lawsuit was prepared by Lawson & Weitzen of Boston. Cambridge Streets for All also brought on Square Communications, a Washington, D.C., public relations and political consulting firm, shortly before the lawsuit was filed. The firm has a branch in Boston, as well as in San Francisco, Seattle, London and Brussels.

More comments from the email are below.

“It is surprising how many people across the City are totally unaware of the mandate to install separated bike lanes. That tells me there was not enough outreach from the city nor any meaningful citizen engagement. All people want is a chance to participate in a meaningful way,” said Joan Pickett, a homeowner in Mid-Cambridge since 1998.

“I have lived and raised my family in Porter Square for over 25 years and have seen the area develop into a thriving neighborhood with a diverse middle-class community and business district,” said John Hanratty, Cambridge resident and homeowner. “When the city removed virtually all street parking for businesses and dedicated travel lanes for buses in North Cambridge, the installation appeared almost overnight and caught residents by surprise.”

Hanratty continued, “After seeing the negative impact the implementation of the quick-build bike lanes has had on businesses and traffic patterns on North Mass Ave, I am extremely concerned about how the imminent plans for Porter Square will irreparably harm the vibrant business community that exists here.”

“My business is a minority-owned barber shop that has been in business for 21 years in Cambridge,” said Harold Gilmer, owner of a barber shop on Mass Ave. “My shop, which specializes in razor cuts, has a broad clientele, the majority of whom come from outside Cambridge. More than 50 percent of my customers come by car.”

Gilmer added, “Past employees left because they could no longer afford paying parking tickets on top of their salary and tips. I estimate that my business has experienced about a 50 percent decline since installation of the quick-build bike lanes because people can no longer park near my shop.”

“This is not just about Porter Square or one neighborhood. The City’s plan to install cookie-cutter bike lanes across the city excludes too many people and has already done too much damage. The City needs to take a hard look at how the new lanes are actually working and come up with a fairer plan that more people can support,” Pitkin said.

Jenkins concluded, “If the City of Cambridge continues moving forward with this process, which will effectively close many small, locally-owned businesses, what do we think will happen to the vacant spaces left behind? Cambridge is already over-developed with out-of-town and deep-pocketed interests having their way with the City Council. We need the people we elect to stand up for us, but instead they’re making decisions that will shut us down.”

This post was updated June 10, 2022, with copies of the lawsuit and “impound” request provided by Universal Hub.