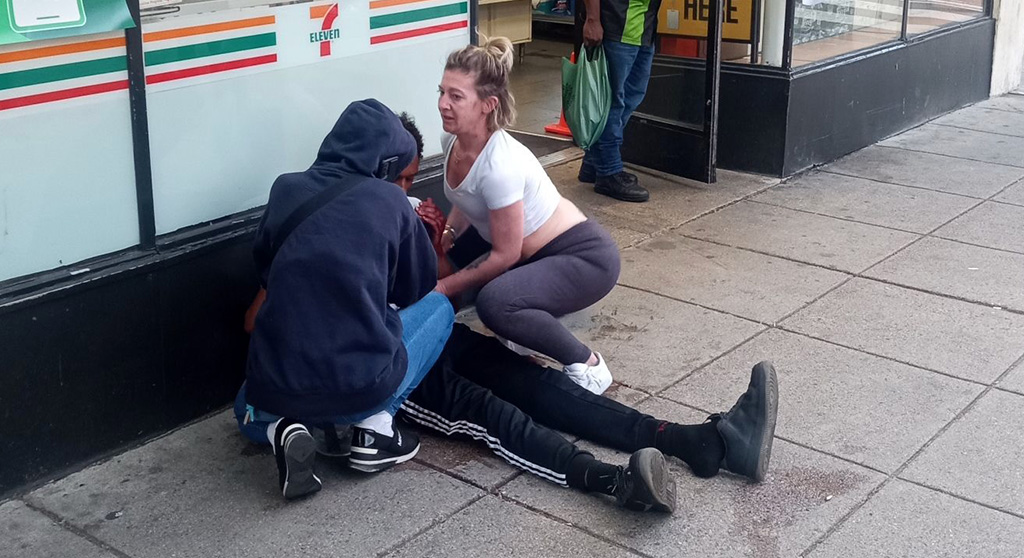 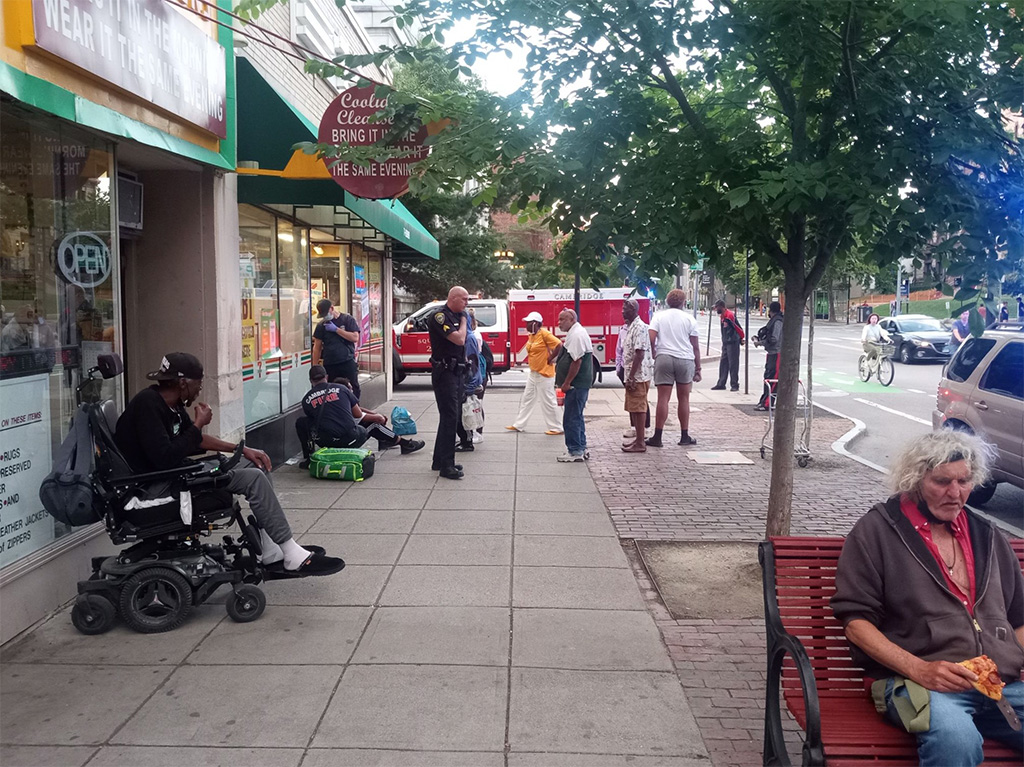 A stabbing victim is treated on the scene at a Central Square 7-Eleven at around 8:15 p.m. Sunday.

Two men were stabbed Sunday evening in Central Square and sustained potentially life-threatening injuries, police said in a 9 p.m. email. Both are believed to be homeless and in their mid-20s. There was also apparently a stabbing earlier in the day, also in Central Square.

In the evening incidents, one man was stabbed near the 7-Eleven at 750 Massachusetts Ave., and the other near 5 Western Ave., which houses the Community Learning Center. The first alerts to the stabbings were called in at 8:04 p.m., police said. A person on the scene said officers and EMTs were quick to arrive at the 7-Eleven and treat the injured man, though onlookers offered help first.

The victim who collapsed by the 7-Eleven seemed to have been stabbed somewhere else and first tried to get into the nearby Cantab Lounge, where he was turned away, said one person on the scene.

“Early information also indicates that two possible male suspects were seen running toward River Street following the stabbings,” police said in the email. Detectives are looking for witnesses and are “aggressively seeking to identify a possible suspect(s).”

There was an additional report from a resident of Central Square, not all of which could be immediately confirmed, of two more incidents there Sunday: action at 8 a.m. in front of the Walgreens at 625 Massachusetts Ave., and a knife injury to a hand at around 10:20 p.m. at the Frank J. Manning public housing apartments at 237 Franklin St. In the morning incident, “police had Walgreens blocked off while two people in full hazmat suits cleaned the area. Walgreens couldn’t let people in. And the cops were sending folks around,” the resident said. An officer confirmed there was police business at Walgreens but had no knowledge of the Manning apartments violence. No further details were available Sunday.

Without including the possible hand injury, these would be the third, fourth and fifth stabbings in Cambridge of 2022, playing quick catch-up with the six gunfire incidents this year. In Cambridge murder statistics for between 1990 and last year, handguns were used in 30 incidents out of 59; knives were used in 14 incidents, or 24 percent of the total.

Somerville’s Davis Square saw a stabbing at 8:30 p.m. June 8 that was said to result from a fight between two men whom residents believed to be unhoused, but the last reported stabbing in Cambridge was on April 11 under less mysterious circumstances: A construction worker trying to collect a debt attacked two co-workers at a Wheeler Street worksite, police said at the time.

The 7-Eleven setting where one victim was found Sunday may seems familiar: It’s where Tywann Jones, 35, of Roxbury, was stabbed to death Sept. 11, 2015, by Antwan Gonsalves, 35, of Cambridge, in what was portrayed in court as an extreme disagreement over competition in drug sales.

This post was updated late July 10, 2022, with reports of a potential third and fourth stabbing of the day.