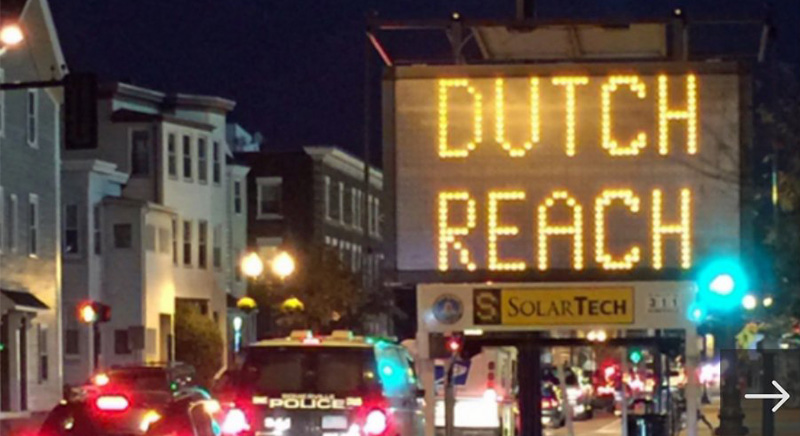 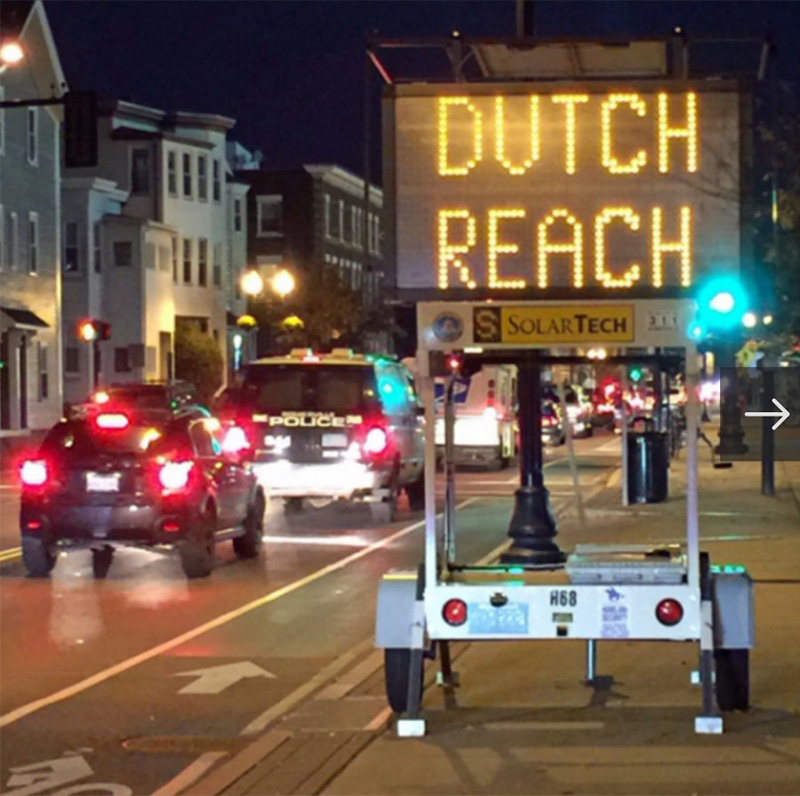 Bicyclists are calling urgently for Somerville to install more protected bike lanes since the Aug. 12 death of Stephen Conley, 72, from a dooring on Broadway near Teele Square.

“Protected bike lanes prevent this kind of crash,” said George Schneeloch, a member of the Somerville Bike Safety group. “The city must work urgently to prevent future fatal crashes like this one by installing protected bike lanes in both directions on Broadway, so that bicyclists are kept clear of car doors.”

Somerville Mayor Katjana Ballantyne has committed to immediate safety changes, but not to a timeline for bike lanes, Schneeloch said. The commitment was reported Aug. 16 by StreetsblogMass.

There’s another solution that could have prevented the Conley crash, though, and doesn’t rely on potentially expensive infrastructure changes: the Dutch Reach, a method of opening a car door using the farthest hand from it. 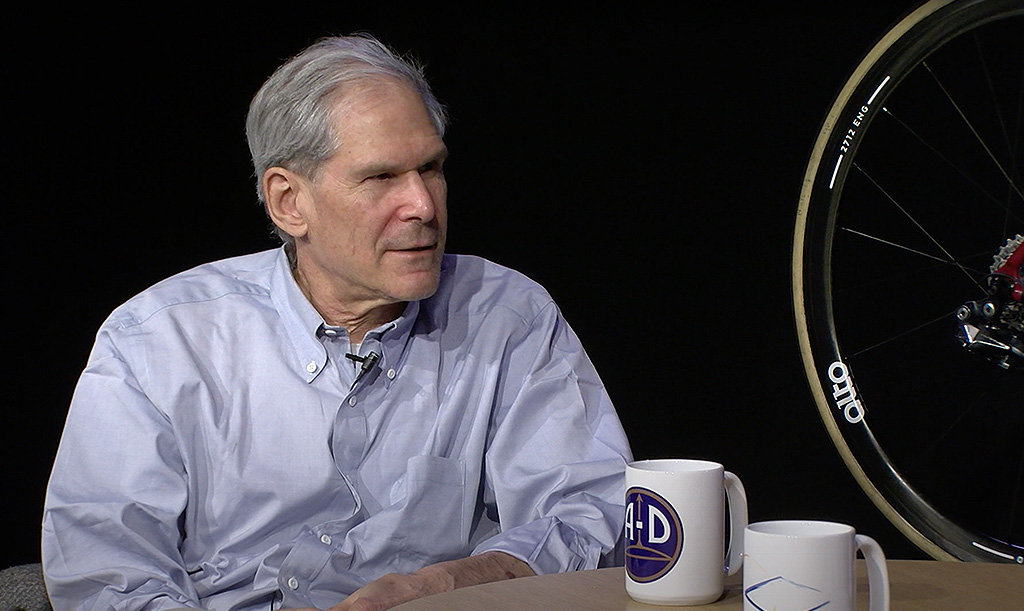 Michael Charney in a screen capture from “All Things Bike with Fred Thomas” in October 2019.

Charney, 76 and still getting around mostly by bike, is a retired physician and bicycling safety advocate who lives in Cambridge just outside Somerville’s Union Square – and credited as the originator of the term “Dutch Reach” and vital in getting adopted worldwide.

A dooring is when a driver opens a car door without looking and a cyclist crashes into it, often getting thrown into traffic. Massachusetts law says, “No person shall open a door on a motor vehicle unless it is reasonably safe to do so without interfering with the movement of other traffic, including bicyclists and pedestrians.” The fine for such a violation is up to $100.

Doorings account for 20 percent of bike crashes in Cambridge, according to city development officials. Jeremy Warnick, director of communications and media relations for Cambridge police, noted in a Tuesday email that July saw three doorings in Cambridge, and a severe dooring in Kendall Square in April that led to riders on a tandem bike being taken to a hospital after first aid was applied by officers on site.

But data collection is complicated for doorings, said Charney and Galen Mock, executive director of the Massachusetts Bicycle Coalition. There are arguably accidents where near-doorings result in a fatality when the rider swerves into a traffic lane and is hit by a passing motor vehicle, but a dooring would likely not be recorded as a factor in the crash. A pending state Act to Reduce Traffic Fatalities would standardize how bike crash data is captured and categorized, Mock said in a Monday email.

Coining a term, starting a movement

The Dutch Reach, while an invention of the Netherlands, was introduced in this country by Charney after he was shaken by the dooring death of cyclist Amanda Phillips in Inman Square in June 2016. Charney launched the Dutch Reach Project by sending a series of “Dutch Reach haikus” to the Cambridge and Somerville police departments – and it was Somerville that took the haikus to heart and placed mobile traffic signs with Charney’s poems flashing on them. Charney’s work helped convince Massachusetts to include the Dutch Reach in its driver’s ed programs starting in 2017. Charney said he has gone on to speak via Zoom with cycling safety organizations as far away as Malaysia and India.

“I practically fell off the chair realizing that this is such a simple solution,” Charney said on the Maine-based “All Things Bike with Fred Thomas” in October 2019. “Dutch reach was my coinage, and it worked out very well for various reasons – one is ‘teach the reach,’ ‘preach the reach.’ What wasn’t appreciated by me at the time that I coined it was that there’s a whole string of [other phrases such as] ‘Dutch treat,’ ‘Dutch uncle,’ also there’s a thing ‘Dutch ding-dong’ that have outré connotations and create a buzz among millennials … Though there’s nothing dirty about the Dutch Reach. It just saves lives.”

Other paths to safety

Charney also endorsed the concept of a “road hierarchy” that places less legal onus on the most vulnerable on the road, starting with pedestrians, then cyclists, motorcycles and scooters, cars, SUVs and vans and, as the most dangerous, trucks and buses.

Another safety measure Charney suggested where there are “door zone bike lanes,” meaning those separated from parked cars only by paint on the road: Cyclists can “take the lane.” Riding in front of cars can be intimidating for cyclists, as motorists tend to get frustrated with slower-moving traffic and might honk or harass them, especially if there’s a bike lane available. But in Massachusetts a cyclist has the right to assume a full traffic lane on nearly all municipally maintained streets, Charney said.

Charney calls his solutions no-cost but partial, as he feels there’s no single cure-all for road safety, but many baby steps to safer roads – including that  “motor vehicle technology, sensors, cameras and computers, keep getting smarter and will be another partial solution to greater road safety.” But always check your mirrors, use the Dutch Reach and slowly, and look for fellow road users, he said.

This post was updated Aug. 24, 2022, with police data on doorings and citations issued in 2020 and 2021 and with comments about road technology from Michael Charney.