‘Barbarian’: Good scares about an Airbnb worth bad reviews 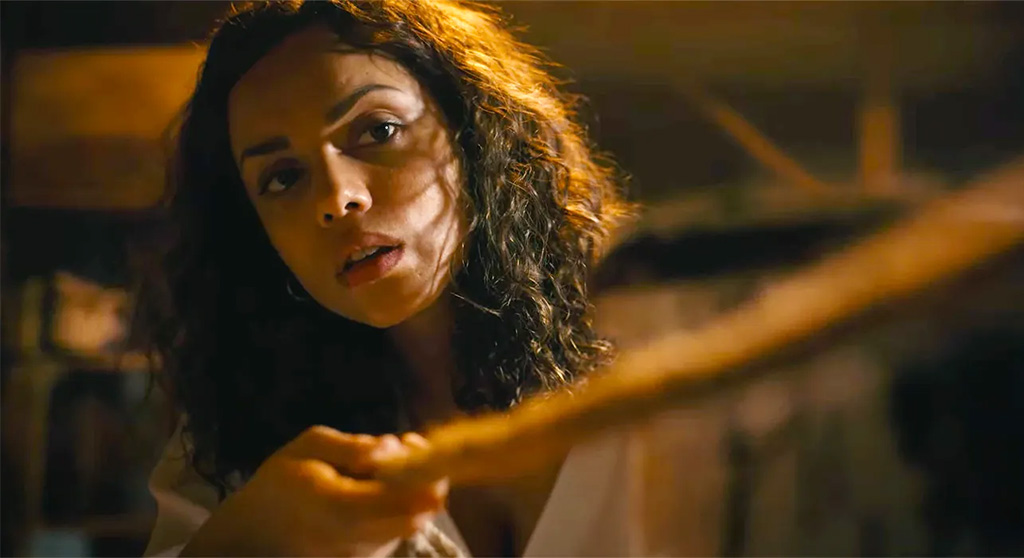 ‘Barbarian’: Good scares about an Airbnb worth bad reviews

“Barbarian” is an innovative shot of horror from writer-director Zach Cregger (“The Whitest Kids U’Know”) that plays gleefully with tropes and viewer expectations. It’s impressively crafted and makes for a riveting and genuinely chilling edge-of-your-seat experience. The setup’s pretty basic: Tess (Georgina Campbell) is in Detroit for an interview to be an assistant to a documentary filmmaker who champions social causes and the arts. In the middle of a major thunderstorm, Tess rolls up to the cute little house she’s rented on Airbnb and finds it already occupied by a dude named Keith (Bill Skarsgård). What to do? Keith’s a little sketchy, but on invite Tess comes in so she can get out of the rain and call the owner. Natch, there’s no answer and no response to email. Keith offers to take the couch, and Tess agrees reluctantly to stay. After Keith lets on he’s seen the director’s films, the two end up bonding over a bottle of wine. You feel certain there’s something devious and dark something going on, but Tess gets through the night and to the interview. What’s troubling in the morning, however, is the realization that the house is the only maintained residence on the street – as far as the eye can see, there’s nothing but dilapidated, bombed-out shacks, husks of Reagan’s 1980s economic boom. When Tess returns to the house, circumstance has her venture down into the basement where Cregger, like Ti West in “X” last year (and likely too with the film’s follow-up, “Pearl,” opening next weekend), pays homage to the classic gore-ror of the 1970s from Tobe Hooper, Wes Craven and more while employing some crafty bait-and-switch and breaking new ground.

It’s hard to say more about “Barbarian” – the curious title reflects the street name, Barbar – without ruining the film’s deftly ingrained, devilish wit. Strange as it may sound, there’s a #MeToo subplot about an L.A. actor (Justin Long, the Mac guy) whose career goes down the toilet and a flashback to Barber Street during the prosperous 1980s. The performances by relative newcomer Campbell and Skarsgard (Pennywise in the recent “It” films) are nuanced, robust and deep in character. “Barbarian” is not quite on par with Jordan Peele’s acerbic social redirect “Get Out” (2017), but it’s in the ballpark’s parking lot. Speaking of Peele and his latest, “Nope,” that’s the exact word in the exact context Peele intended that falls from Tess’ mouth when she discovers an antechamber. Since the films were released in the same year, it’s hard to imagine Cregger playing on it; the serendipitous prospect is equally as neat. For all its little dekes and tweaks on old tricks, “Barbarian” falls more and more toward the pedestrian as it ties up loose ends and subplots. It’s still a taut, worthy ride and one that should allow Cregger, whose directorial CV is slim, to come back with more.