‘Nope’: A hell of a weird ride on the horse ranch 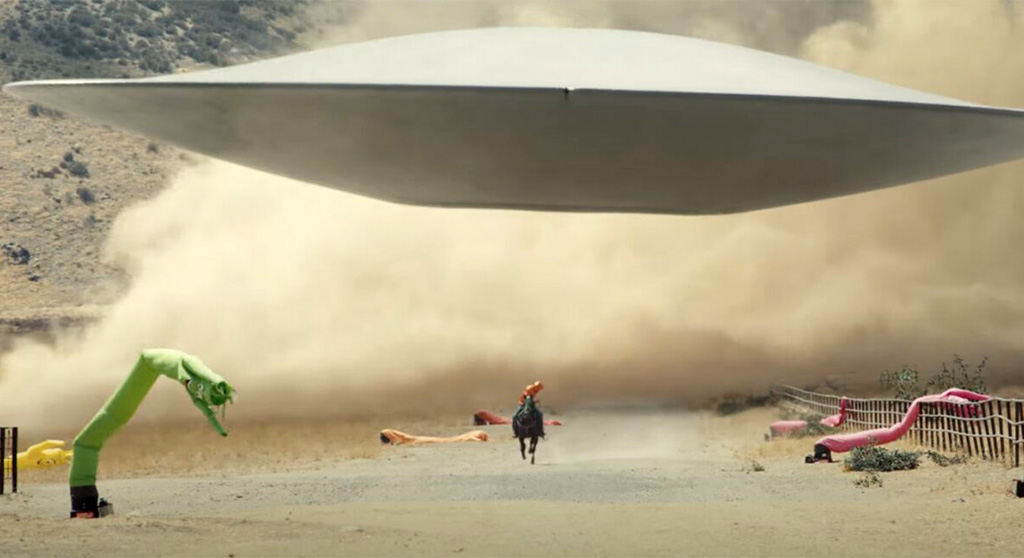 ‘Nope’: A hell of a weird ride on the horse ranch

Jordan Peele’s third horror installment would make a good double bill with Quentin Tarantino’s “Once Upon a Time … in Hollywood” (2019), as both take place in dusty Western shanty towns north of L.A. with ties to the film industry. Good portions of Tarantino’s “Once,” starring Leonardo DiCaprio as a 1950s western TV actor whose glory days are behind him, are situated in a Hollywood stage strip town and the Spahn Ranch where followers of Charles Manson have set up camp. In Peele’s “Nope” – the terse title a take on audiences reaction to horror films when a potential victim does something unwise – nearly all the action takes place at the Haywood’s Hollywood Horses ranch and neighboring Wild West theme park, Jupiter’s Claim.

Peele is one to settle into the everyday and root audiences so deeply in his characters that when things go bump in the night, it takes a little while to catch onto the oddities. The same is true here; the atmospheric buildup is masterful. Though I hate to say it, I’m not sure the payoff is as worthy as his first two efforts, “Get Out” (2017) and “Us” (2019). We catch up with Pa Haywood (David Keith, in it far too little) and his son OJ (Daniel Kaluuya, working with Peele again after “Get Out”) moseying around their vast, barren ranch when what seems like bullets start to pepper the area around them. Is there a sniper in the hills? Nope, just a freak aviation mishap that takes Pa’s life – or so that’s what the authorities say happened. Strapped for cash and unable to keep the biz clicking like Pa, OJ sells some of his horses to that Wild West show run by former child TV star Ricky “Jupe” Park (Steven Yeun, “Minari”). One night OJ and his fiery kid sister Emerald (Keke Palmer) witness cultlike gatherings at Jupiter’s Claim and freaky stuff starts to happen. The electricity goes out, horses go wild, there’s an upward vortex scouring the valley, and something dark and big streaks through the sky.

Sensing something otherworldly and wanting cash, Emerald and OJ decide to capture the phenomenon on film so they can score their “Oprah moment.” Part of the plan leads them to a Best Buy knockoff, where they reluctantly enlist the resident Geek Squad dude named Angel Torres (a bleach-blond-streaked Brandon Perea) to set up security cams to capture the phenom. Angel’s a bit of a UFO nerd to boot, and looking at early footage notices a cloud that hasn’t moved in days, hmmmm. When the entity dampens electricity by battery or otherwise, the trio turn to veteran Hollywood cinematographer Antlers Holst (character actor Michael Wincott, whose gravelly voice is an attraction in its own right) and his old-school, crank-operated cam.

The rise to the crest is slow and steady, and a great character study with some super neat backstories, but once we get to the what and why of the goings-on at Jupiter’s Claim, “Nope” shifts gears and becomes something akin to a Spielberg alien encounter flick – “War of the Worlds” (2005) or “Close Encounters of the Third Kind” (1977). Some of the bait and switch in trying to ferret out the entity also has some of the seagoing fun of “Jaws” (1975), with players at different posts reacting to unfolding events differently, though given the dusty, spare terrain it reminds me more of the quirky 1990s cult hit “Tremors.”

Some of the basic rules about encountering the visitor don’t always hold true; OJ learns that if you avoid eye contact and look down, you’re in a safe place. It works for him, but not so much for others. The film’s told in chapters, mostly with names of animals the Haywoods train or the TV-family-adopted chimp Gordy, from one of the hit shows Jupe was part of as a boy. It’s a dark, alluring chapter that has little to do with what’s going on in the present, but a phenomenal – and let me add, grim – segment, worthy perhaps of a bigger piece on its own. Then there’s the Haywoods’ history: The first moving picture shot by Eadweard Muybridge, a clip called “The Horse in Motion” from 1878, featured a black jockey riding a lithe, muscular stallion, which Emerald proudly tells prospective employers was their great, great-grandad.

As far as sociopolitical commentary goes, there’s nothing as prominent here as in “Get Out.” Perhaps a comment about territoriality and land rights, or inciting an entity that holds lethal authority? More so “Nope” is a solid summer pleaser, a sci-fi thriller with some very deep characters, incredible performances – the laconic Kaluuya does so much with those eyes, and Palmer is just a firecracker in every scene – and a thinking person’s pacing. It isn’t perfect, but it powers through with an ensemble performance that’s near unbeatable.