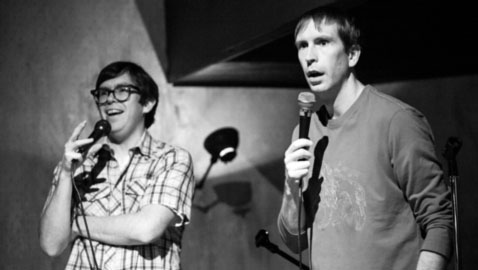 The Walsh brothers are indeed coming back. The Charlestown natives, who moved their unique brand of comedy to Los Angeles in 2007, say they will be appearing April 26-27 in Davis Square.

It’ll still be a little like old times – meaning the era in which the brothers led the Great and Secret Comedy Show in ImprovBoston’s theater in Inman Square – in that the openers and house band will be the Grownup Noise, the pop band that performed the song for the brother’s beloved Fung Wah sketch.

Here’s the best video we have of a “Fung Wah” performance:

Certainly the sidelining of the notoriously dangerous Chinatown bus service just as the Walshes and Grownup Noise reunite calls for a replay of one of the brothers’ most popular bits. (And when will they ever get to do it again? To paraphrase Steve Martin’s “The Man With Two Brains,” not only is it dead; it’s 3,000 miles away.)

In news that’s almost as good, the second episode of the brother’s Comedy Central series has been posted: