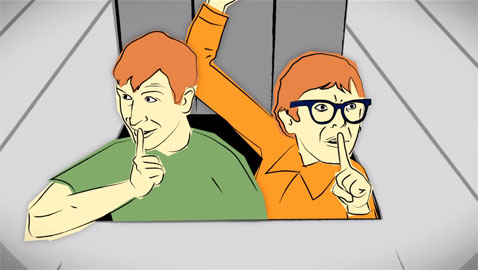 The Walsh brothers have a Comedy Central Web comedy series!

The first video, posted this week, signals from its very name – “Naked Yeti Terrorizes L.A.” – that the brothers have lost none of the spark and weirdness that energized their Great and Secret Comedy Show when it was in Inman Square from 2003-07. (Since Chris Walsh was doing the Naked Yeti at least back to 2005, it’s pretty clear from the semi-SFW video that he hasn’t lost anything else, either. Dave Walsh, who usually kept his clothes on, displays the same subversive presence.)

Since moving to Los Angeles in 2007, the Walshes have created a West Coast Great and Secret Show, messed around with concepts such as The Ramada Boys, the low-rent answer to Paris and Nicky Hilton (in the video below, keep an eye out for Erik Charles Nielsen, who has a recurring role on “Community” on NBC):

Gets some blame for introducing planking to the United States:

And have even made the connection between fish and Starbucks Frappuccino you’ve always suspected and have never been able to pin down:

The Walshes, Charlestown natives, are scheduling shows in the Cambridge area for next month.