Whatever these bands are playing Wednesday, Thursday, it’ll be nice 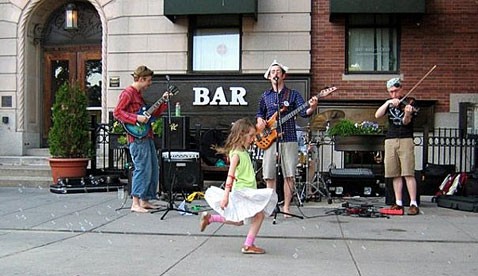 Whatever these bands are playing Wednesday, Thursday, it’ll be nice

In what is basically the opposite of the Monsters of Rock, the nicest bands in the area play this coming week: The Doctors Fox on Wednesday at Cambridge’s Lizard Lounge and The Grownup Noise on Thursday at Somerville’s Radio.

Aside from niceness, the bands share another trait: It’s difficult to identify their brand of music with any precision. The Doctors Fox can identify strains of rock, jazz, bluegrass, reggae, hip-hop, soul, prog, pop, klezmer and latin/brazilian music in their tunes and have recently named Tropicália, which came out of Brazil in the late 1960s as “its own derivative non-genre” as the closest term they could embrace as a signifier. As lead singer and bassist David Ladon told Vents magazine, “We have our own sound, but I’d be damned if I could describe it any better than this.”

The Grownup Noise, meanwhile, refers to its “eccentric pop” as having an “avant-baroque” sound that starts with a traditional rock setup and adds accordion and cello to perform songs influenced by the Beatles, Velvet Underground, Stars and Ra Ra Riot on stages shared comfortably with everyone from Amanda Palmer to Rock Plaza Central.

How nice are these bands? The Doctors Fox have sold plenty of CDs at Saturday morning farmers markets after catching the attention of kids dragged along by shopping parents. The Grownup Noise are so nice that woodland animals come around to help them do laundry — okay, not a real example, but spend any amount of time with them or hearing their music and you’ll get the sense. These bands are not made up of dark souls howling at the ceiling for existential release, just pleasant people who are exceptionally good at writing and playing music.

The Doctors Fox play at 10 p.m. Wednesday at The Lizard Lounge, 1667 Massachusetts Ave., between Porter and Harvard squares, after Steve Subrizi and before Tilt-A-Whirl. Tickets are $5.