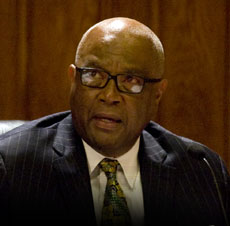 Two longtime elected officials are wrapping up their runs in office with different approaches to how the city responds to citizen-inspired legislation, with city councillor Ken Reeves warning against citizen initiatives and Mayor Henrietta Davis signing up for an energy-efficiency task force emblematic of the issue.

“Suddenly in the city it looks like you can have a major proposal appear, proposed by somebody you don’t even know how long they’ve been in Cambridge, to do something extraordinary – and it suddenly takes legs and walks,” Reeves said. “I have become increasingly concerned that Tom, Dick or Harry seems to be able to put up a big idea and suddenly we’re about to revamp the world to accommodate it.”

“I’m not with that, and I don’t think you should be either,” Reeves said. “Because it’s really not how Cambridge has gotten this far, by trying to go in everybody’s direction the moment they get here.”

Reeves was talking about the Connolly petition, which was filed in mid-June to make new city developments of 25,000 square feet “net zero” on emitting greenhouse gases that add to global climate change. The petition suggests developers can do this through a mix of buying renewable energy over the existing electricity grid; generating energy onsite; employing certain construction techniques and conservation measures; and, as a last-ditch measure, buying renewable energy certificates. The petition, written by longtime city sustainability activists John Pitkin and Quinton Zondervan, had 26 signatures and followed the city’s rules for petition submissions.

“Our efforts were supported by Green Cambridge, the Cambridge Residents Alliance, the Association of Cambridge Neighborhoods, the Massachusetts Sierra Club, the Cambridge node of 350.org, Harvard’s chapter of Students for a Just and Stable Future, Bill McKibben, Will Brownsberger, Carl Sciortino, Patty Nolan, Dennis Carlone, Nadeem Mazen, Kristen von Hoffmann, city councillor Minka vanBeuzekom and over 500 residents who signed an online version of our petition,” said Mike Connolly, the resident for whom the zoning petition was named.

In the past council term the city has spearheaded zoning initiatives focused on the work of large developers, including the Forest City zoning for a Millennium Pharmaceuticals building near Central Square and MIT’s so-called PUD-5 plan to remake 26 acres in Kendall Square. Residents have filed zoning in the past few years aimed at such things as correcting the city’s long-standing inability to punish violators of its building and zoning codes and to enforce its own ordinances on intrusive lighting. (The de Rham petition allowing for fines for building and zoning code violations was adopted Nov. 21, 2011, three months after it was introduced; the Teague petition against glare has its own short-term task force as of Dec. 2 aiming at making final recommendations in the spring for resolution of a problem that has been before the council and Planning Board for at least a half-dozen years.)

“We want to be responsive, but we can’t remake the city every time somebody says we should do something a different way. I don’t mean to chastise, I just wanted to talk to you as policy-makers,” Reeves told fellow councillors Dec. 16, his final meeting in office after two dozen years, saying also that “nobody living disagrees with the underlying thinking” on the net zero emissions proposal.

From mayor to task force member

Davis, though, has gone further on net zero, with her mayor’s office convening an expert panel on net zero in response to the Connolly petition and as a contribution to what she called the “net zero emissions month” of October.

She sent a letter Monday underlining some of her ongoing aspirations for the city even as she opts out of public office for the first time in 26 years. One focus for her has been science, technology, engineering and math education to connect city students – especially underrepresented girls – with jobs in Kendall Square’s innovation industries, but she also highlighted her efforts to help residents “aging in place” and on green issues, including the creation of the Cambridge Compact for a Sustainable Future, begun with the city, Harvard and MIT and now including some two dozen institutions and businesses.

“I’m proud to be known for ‘green’ efforts in the city, pushing the envelope for the city to be a leader in the state, the country and the world. And we continue to set the bar high in energy efficiency efforts – first green buildings, now looking to net zero,” she said in the letter.

She is also joining the Net Zero Task Force charged with setting Cambridge on the path to becoming a “net zero community,” having been appointed to it by City Manager Richard C. Rossi.

Despite her green bona fides, Davis’ record on net zero has been mixed. In the April 8 voting on MIT’s zoning for Kendall Square, she helped pass an amendment by vanBeuzekom (also out of office as of Dec. 31) saying the school had to reduce carbon emissions from each new building to zero “with renewable energy credits after best engineering and design criteria are implemented” – but then changed her vote a few minutes later and killed the amendment on the advice of the institute’s development arm, Mitimco.

In October, her “Getting to Net Zero” panel ignored the Connolly petition, even as its experts talked for an hour and a half about the many forms net-zero energy proposals took and how hard it was to achieve them.

Later that month, she told the second annual Net Zero Cities conference in Fort Collins, Colo. that “Our citizens aren’t quite sure what ‘net zero’ is, but they know they want it.”

At the Dec. 16 meeting, it was councillors fumbling around with net zero definitions and concepts that, until vanBeuzekom reminded them of it, seemed to ignore that they’d voted on a net zero amendment three months before the Connolly petition arose. The councillors’ confusion was also in spite of the fact that the city long ago ordered net zero construction for The Dr. Martin Luther King Jr. School, being rebuilt for $84 million on Putnam Avenue and due to be done in August 2015.

There was even an odd trail of debate Dec. 16 that took councillors’ own uncertainty about whether “net zero” was written as two words or one word with a hyphen as a warning sign for the community. (It’s two words, but can be hyphenated when used as a compound modifier.)

The Connolly petition “wasn’t a surprise, but it’s a hugely confusing issue. We don’t know if it’s one word or two words, and I think that’s probably the most definitive thing we can know about when it comes to net zero,” councillor Craig Kelley said. “California’s doing something, the army may or may not be doing something. I think we need to be very careful about saying what other people are doing when it comes to net zero, because we have no clear idea about what’s really going on, and I fear we will set a bad road for future discussions if we put issues out there that may or may not be applicable.”

Davis agreed with Kelley, saying “the definition stage is probably the first one. Or maybe it’s the final conclusion – ‘What do you mean by net zero?’ might be enough to tap out.”

Net zero construction policies are more mainstream than many councillors seemed to know, she said, but “We don’t know yet what ours is, or if there’ll be a net zero policy.”

Her attempts to articulate further, though, despite her environmental work over the years, two April votes and even having put together and attended a panel discussion on the topic, did not clarify much:

I know that in terms of the King School we know what net zero is aiming to be, which is that it would be net zero, well, net zero emissions – net zero energy, that is, the energy, if we’re able to achieve it, it would be that the energy that’s needed from the building after it’s made as efficient as it can be would be zero emissions, but also located on site. But it’s very confusing, and I think it’s entirely appropriate to have a net zero committee and I’d be very honored to be a citizen working on it.

“Wise minds will prevail here,” Reeves said. “But how we could suddenly change our code and revamp zoning and everything while in the midst of an electoral cycle, that just didn’t fit.”