Officials still ‘trying to figure out’ process for a master plan, but it’ll start in Alewife 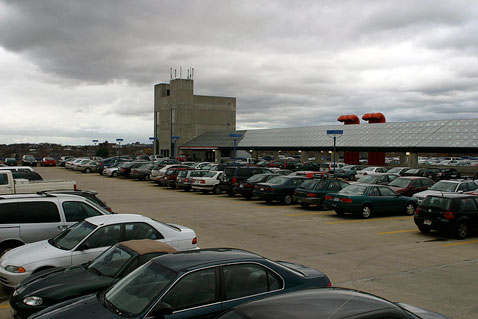 Officials still ‘trying to figure out’ process for a master plan, but it’ll start in Alewife

Cars crowd the Alewife parking garage, where mass transit ridership is reported as being up 19 percent since 1997. (Photo: Jared and Corin)

What might be called the catastrophic success of development in the Alewife area makes it the place to start a citywide planning process, city managers told the City Council on Monday.

The master plan process got off to a rocky start, considering officials insisted until April that an adequate master plan already existed, and that the authors of a July interim report on the process questioned that a master plan was about development or would actually happen.

Officials said Monday they still weren’t sure how to do the master plan – but were confident the work would start in Alewife, where residents have described a “tsunami of development.”

By the count of some of those concerned residents testifying at meetings in recent months, construction of housing in the area is already significantly over city goals, even though a plan has been in place for only half its expected life through 2024.

“When we talked about what we thought might happen there back in 2006, I don’t think any of us imagined, quite frankly, it would happen as quickly or as broadly as it has,” Mayor David Maher said.

From Alewife to all

An update to the Concord-Alewife plan was asked by councillor Leland Cheung in March, but Cheung didn’t argue Monday with city managers turning that request into a springboard for a wider look.

Councillors agreed with going back to Alewife, starting with walking tours to get an in-depth understanding of the area’s “challenging development issues” ahead of a Dec. 1 roundtable about planning – but as part of a broader process. As Rossi said in a letter to the council:

Rather than conducting a separate update of the Concord-Alewife Study, we expect to develop recommendations for updating the plan and zoning in the Concord-Alewife area as the early phase of the upcoming citywide planning process in the context of the overall city goals and objectives.

Maher agreed that the rapid development in Alewife – where an estimated 45,000 cars jam a rotary daily and there’s been a 19 percent increase in use of an aging and overburdened mass transit system since 1997 – makes it the right place to start thinking citywide.

“It makes perfect, perfect sense to start looking at this planning initiative right here in a place that has significantly changed since 2006,” he said. “It’s definitely the place to start and look and see what we can do to help effect a better and well-positioned neighborhood and city.”

Still, there are no dates attached to the master plan process since the July interim report, which was based on input from 18 community meetings and drop-in sessions between May 31 and June 30 and included resident suggestions on how city officials could get people involved.

“This is all part of a comprehensive plan that’s going to be trying to be coming up with a vision of the best Cambridge for the next generation to come. That’s only going to be successful if we have truly broad representative input from the community … I absolutely pledge to you that it will be quite extensive,” Murphy told councillors, promising he would be back for their ideas on getting residents involved.