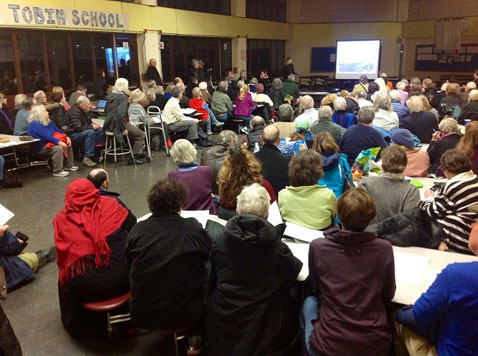 City councillor Dennis Carlone has launched an online petition asking for new citywide master plan, first circulating a letter at Monday’s inaugural meeting of the Fresh Pond Residents Alliance in which he called for “an open process that will begin to provide a cohesive vision for how our city will grow and mature in the years to come,” stronger design review and “action to ensure that zoning guidelines are applied in a way that reinforces all that we love about our neighborhoods.”

Organizers called the 150-person meeting “unusually well attended” and said it came as another sign of mounting frustration across the city with the planning process, from ongoing debate over the redevelopment of the Sullivan Courthouse in East Cambridge to outrage over a proposal to build 40 micro-units without parking in Harvard Square.

There is a “tsunami of development” underway in the Fresh Pond/Alewife area alone, organizers said at The Tobin School meeting. They cited the more than 2,500 residential units built or in the pipeline since 2010 and prompting a vigorous discussion among attendees, many of whom were unaware of 2006 zoning changes that unleashed what organizers called a “gold rush” and said they were shocked by the scale and density of growth around the area.

While the extent and rapidity of the development boom seemed to have taken residents by surprise, they said the impact on quality of life was not lost on them – most visibly through more traffic on Fresh Pond Parkway, Concord Avenue and neighborhood side streets, reduced safety for pedestrians and cyclists and more intensive use of the area’s retail services and open space resources.

Impact on the environment and affordability

Ellen Mass, of the Friends of Alewife Reservation, made an impassioned plea for concerned citizens to help her nonprofit sound the alarm for the impact on the fragile wetland ecosystem. With the potential for severe flooding along the Mystic River floodway all around Alewife, the prospect of more than 1,500 units on Cambridge Park Drive alone and a proposed 80,000-square-foot hotel had the Fresh Pond Residents Alliance calling for a moratorium on development pending the release of the city’s Climate Change Vulnerability Study.

Attendees also expressed concern that most of the development consists of one- to two-bedroom “luxury” apartments concentrated in massive buildings erected on formerly industrial sites, where residential requirements for more open space and greater setbacks do not apply. Some noted that inclusionary zoning results in only about 11.5 percent of the new units being reserved for low-income residents, yet raises the total number of units in the process. The acute shortage of affordable housing for middle-income residents and families with children are being ignored in this rush to maximize the developers’ return on investment, several speakers said.

New Street project is a flashpoint

A lightning rod for many residents at the meeting was a proposed 93-unit building at 75 New St., another instance of an industrial parcel being converted to high-density residential use. Originally laid out as the road to the town dump, two-lane New Street is a route for vehicles traveling to and from Danehy Park and Evolve Fitness and those avoiding parkway bottlenecks to access Fresh Pond Mall at the rear, organizers said. The proposed development on New Street (and the same developer’s 54-unit “Park 87” building next door) are pitched as transit-centered, but organizers said walking to the Alewife T stop posed safety risks from busy mall parking lots and inadequate sidewalks connecting New Street to Concord Avenue.

At a March 4 hearing before the Planning Board, a dozen residents voiced strong opposition to the proposed design and demanded that, at minimum, New Street’s circulation and sidewalk infrastructure be improved before special permits were granted. An online petition has gathered more than 240 signatures. The board resumes deliberations on the project April 8.

Carlone was calling for a new, citywide master plan as a candidate for council in November’s election; the Cambridge Residents Alliance also wants one; and member and citizen activist Charles Teague has complained to the state that Cambridge is breaking the law by having no master plan.

A version of this story appeared originally on the website of the Fresh Pond Residents Alliance. It was updated March 31, 2014, to change the headline, which suggested incorrectly that the FPRA was calling for a development moratorium.