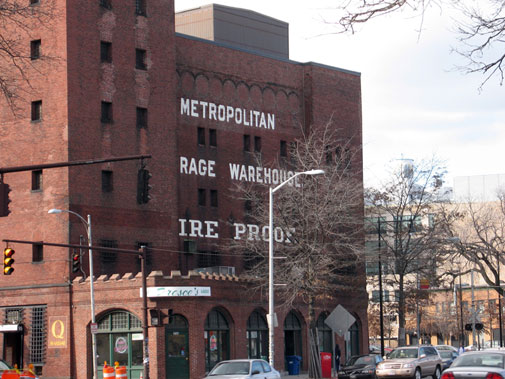 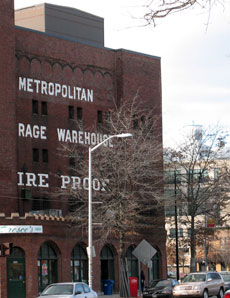 Metropolitan Moving & Storage, beloved by residents in part because the message it imparts when looked at from the right angle, has lost its lease from the Massachusetts Institute of Technology.(Photo: Rekha Murthy)

The Massachusetts Institute of Technology is being asked by the City Council to reconsider its shutdown of the 121-year-old Metropolitan Moving & Storage warehouse, a massive structure near its campus due to be turned into an institute building, including residences for between 400 and 450 students, maker space, student center uses and ground-floor retail.

In the council resolution passed Monday, the institute is asked to consider alternatives to ending its lease to the company or that “at the very least, MIT consider granting one year to allow Metropolitan Moving & Storage customers find alternative arrangements.”

“It’s very short notice,” councillor E. Denise Simmons said of the current need for some customers to vacate by the end of October, while others were told to be out by the end of January.  Letters went out in mid-August. (City Clerk Donna Lopez said her office stores records at Metropolitan, paying monthly for a storage unit, but still hadn’t been told by the company to remove them.)

The 221,194-square-foot facility at 134 Massachusetts Ave. and Vassar Street includes more than 1,400 storage units. Simmons called it “a low-cost, locally based and family owned alternative to national storage chains such as U-Haul … of particular importance to low-income residents in Cambridge for generations.”

People who have already been displaced suddenly from their homes because of surprise redevelopment have been using Metropolitan, and now face pressure to find other accommodations, Simmons said.

While Metropolitan sent vacate notices to customers – and explained it was because MIT, the warehouse’s “landlord for the last 43 years, has decided not to renew our lease so it can use the building for its own purposes” – there has been no formal notice from the institute, either as a press release from its Office of Government and Community Relations or in response to direct requests for comment.

“It’s just really extraordinary, and I’m really disappointed with how this was made known to people using the facility. I would ask that they cease and desist,” Simmons said. “I know folks are very much favoring that MIT house its students, and yes, they should, but in this regard, the way they’re doing it, it’s on the backs of other people, Cambridge residents for the most part.”

The institute was pressured throughout 2013 to add student housing to its revamp of the East Campus off Kendall Square, and a draft report released early last year on the issue described immediate demand for housing for between 500 and 600 graduate students alone, as well as a need to build even more as rent prices in and around Cambridge rise beyond what students can afford. The community demanded more housing also, because demand from students forces up the price of rent for non-student residents in a tight housing market – by one estimate, one with a 1 percent vacancy rate from year to year.

“This is not storage over housing,” Simmons said. “This really has to do with MIT being better at informing people. I’m asking for MIT to be more sympathetic.”

Her resolution passed without opposition, although near the end of a meeting that lasted more than six hours it was Simmons’ voice alone standing in for the ayes.

Update on Sept. 24, 2015: Today the MIT News Office posted an interview with Associate Provost Karen Gleason about the redevelopment of the warehouse. In it, Gleason said:

“We’ve also been working carefully with the Metropolitan Storage Warehouse business owners to support their efforts in preparing the building and offering storage alternatives to customers. We know that some people have stored belongings in the facility for a long time, and we are sensitive to the possible disruption that may be caused. We are committed to working collaboratively with Metropolitan Storage and its customers in order to identify the best solutions as the proposal advances.”