‘Better Future’ is one in which MIT renews grad-student housing policy, forum says 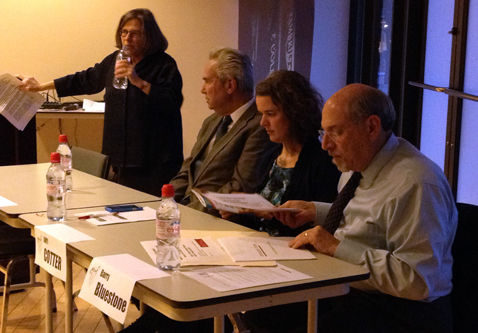 ‘Better Future’ is one in which MIT renews grad-student housing policy, forum says

The Massachusetts Institute of Technology took a relentless drubbing at a Thursday forum on “A Better Future for a Better Cambridge,” and the City Council didn’t get off much more lightly – save for councillor Minka vanBeuzekom, who voted earlier in the week against the institute’s request to rezone 26 acres in Kendall Square.

Fred Salvucci, a former state secretary of transportation and senior lecturer in civil engineering at the institute, returned time and again at the two-hour-plus forum to bashing his employer for its plan’s approach to sustainability and housing for graduate students, whom he called “shock troops” who will go on unintentionally displacing families and longtime residents.

“What they’re doing is reprehensible,” Salvucci said of MIT.

He made a direct appeal to the crowd of about 70 at the forum organized by the sustainable-development organization A Better Cambridge that, if they think the council voted right, “I urge you to reconsider” and to keep up pressure on the institute during its promise of “a process after the process … MIT is not invulnerable to public opinion.” He also drove home the theme that it is the T’s red line that makes Kendall Square thrive, but that the plan adds the pressure of hundreds of residents and 2,500 permanent jobs to a transit system that is already full. (A June study from the Dukakis Center for Urban and Regional Policy at Northeastern University suggests the red line at Kendall Square is already over capacity and continues to be an area of concern for future congestion.)

The rezoning, voted Monday after a two-year process, lets the institute build about 1 million square feet of commercial space, 800,000 square feet of academic space, 65,000 square feet of retail and more than 300 units of housing for a mix of wealthier, lower- and middle-income residents. Eighteen percent of the housing will be deemed affordable.

The plan drew praise from speaker Barry Bluestone, a Cambridge resident and founding director of the Dukakis Center. “I want to see us build more housing, not less, and I want to see it go higher where it’s appropriate, not lower, and I want to see some of those units be micro-units for young professionals – because not only do I want to keep them here, I want to get them out of my street. I want to get them out of older housing stock that is still affordable,” he said. “Trying to figure out a way to deal with housing prices is important, and that’s why I applaud our City Council for what they did [Monday] regarding Kendall Square.”

But after Salvucci’s withering screed against the school, which noted that the school didn’t propose net-zero energy use on its own or support vanBeuzekom’s net-zero amendment, and again after skeptical questioning from residents in a question-and-answer session, Bluestone clarified that his praise for the council was limited only to the fact it “put denser housing on less land, near transit.” He wasn’t happy the institute rejected net zero, he said, and credited MIT with housing as many grad students as it did – 39 percent of its 6,259 grad students last year, or more than 2,400 of them – only because his own employer houses only 78 out of more than 7,000.

In fact, only 8 percent of graduate students are housed by their schools across Greater Boston, Bluestone said, with Boston College, the University of Massachusetts at Boston and Northeastern combined housing fewer than 200.

MIT’s shining example is deceptive, though, Salvucci said, because the institute is touting the lingering effects of a policy it has abandoned. During the presidency of Charles M. Vest, from 1990 through 2004, the school had a policy of housing 50 percent of its graduate students – a product of Cambridge resident Bob Simha, who served as director of planning for four decades ending in 2000. The policy was dropped by president Susan Hockfield after she took over nine years ago, and the school keeps adding grad students.

“They are drinking from wells they had nothing to do with digging,” Salvucci said.

Salvucci, Bluestone and final panelist Amy Cotter, director of regional plan implementation at the Metropolitan Area Planning Council, were united on endorsing denser, city-focused development that offered options for getting from place to place – including walking – and as a result stayed diverse, helped small business, used fewer natural resources and polluted less. They inveighed against the city’s veering toward gentrification and agreed the “bump factor” touted by innovators to support density meant something only if there were different races, classes and kinds of people bumping into each other, not just scientists bumping into venture capitalists. (In talking about keeping families as part of that diversity, Salvucci blasted “this weird celebration of no-child households. A community without children, where the schools are hollowing out, loses its sense of community.”)

A return to rent control was not the answer, the panelists said, as that was great for longtime residents and terrible for anyone trying to move into the few rentable places in town, where prices explode to make up for rates frozen everywhere else. Subsidies were a way to keep diversity where rents and homeownership were otherwise realistic only for the wealthy, Bluestone said, but in general there are subsidies only for low-income people, not middle-class families.

While Ellen Shachter, an attorney at Cambridge and Somerville Legal Services, used the term “tokenism” Thursday for MIT’s intentions to build 300 housing units, City Council candidate Tom Stohlman reminded the panelists that the zoning it won in Kendall allows for unlimited residential construction, meaning “MIT can still do the right thing.”

Also, in listing the failures of the Massachusetts Bay Transit Authority to build a blue line extension to Lynn by 1980; a blue line-red line connector by 2001; and a green line extension by 2011, Salvucci urged revival of an urban ring section of bus rapid transit through Kendall and for the Grand Junction rail plan, with a Kendall stop, last considered in December 2011. And a resident noted that a green line extension running within the next half-dozen years could take some pressure off the red line.

Focus on MIT, the council

But much of the focus and hope for a better Cambridge was put on taking grad students out of the private market and back into campus housing.

“If MIT were housing 100 percent of its postdocs and graduate students, which in this economy is the appropriate level, that’s 5,000 beds. With the lack of that housing, those students – I’m not blaming the students, they’re very nice people – are the blockbusters, they are the shock troops of gentrification. They will live [together] in density and pay rents no family can afford,”  Salvucci said. “MIT has disgracefully failed to step up to the plate … if MIT wanted to walk the talk, the opportunity was Monday night.”

There was support in the audience for the notion that the council, in approving the zoning Monday, acted too quickly.

“I’m really happy we seem to have come to a conclusion that it’s not upzoning that is the issue, it’s MIT that’s the issue,” Cotter said to some chuckles.