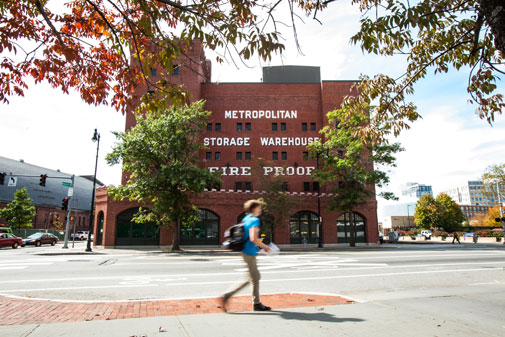 Metropolitan Moving & Storage, the massive, fortresslike Massachusetts Avenue structure by the Massachusetts Institute of Technology, is closing after some 120 years in business. (Nate Photography)

Many prominent Cambridge businesses have closed their doors in the past few years, but none quite so prominent as this – nor quite so enduring.

Metropolitan Moving & Storage, the massive, fortresslike Massachusetts Avenue structure by the Massachusetts Institute of Technology, looks to be closing after some 120 years in business. 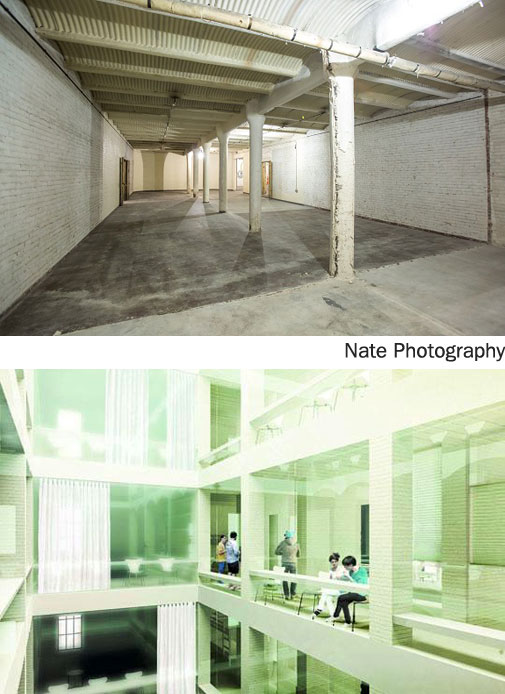 The interiors of the Metropolitan warehouse now look much different in a rendering of Massachusetts Institute of Technology plans. (Bottom image: MIT 2030)

Customers at Metropolitan are being told to vacate to make way for an institute project described as including residences for between 400 and 450 students, maker space, student center uses and ground-floor retail, according to a customer who has received a letter from the company. A Metropolitan worker confirmed the closing.

In the letter, managers for Metropolitan owner Neal Mizner explains that MIT, the warehouse’s “landlord for the last 43 years, has decided not to renew our lease so it can use the building for its own purposes.”

“We have been in the storage business since 1894 and family-owned since 1972. We have customers that have stored with us for generations, some for over 70 years,” company publicity materials say. In January, the company’s Andy Whigham said the company had “45,000 customers and counting.”

Customers must “completely vacate … no later than” Oct. 30, the letter says, according to a recipient. The letter points to the Extra Space Storage in Dorchester as a fallback facility, but warns that there won’t be enough space for all Metropolitan customers.

Update on Sept. 3, 2015: Some customers must remove their belongings by the end of January, rather than by the end of October, a worker said.

A worker at the 900-unit Extra Space Storage confirmed that some customers have begun moving their belongings from Metropolitan.

Messages asking for more information were left Thursday with Mizner and the institute’s Office of Government and Community Relations.

The 221,194-square-foot facility claims more than 1,400 brick and concrete units, many 10 feet high and ranging from 30 square feet to thousands of square feet. “Your goods are then secured behind a two-inch thick steel-framed fire door,” warehouse publicity boasts. “It is like having your own private bank vault.”

The decades-old company also performed commercial moves and sold boxes and packing supplies – a handy resource for nearby students as well as for the hundreds of customers coming and going, all of whom paid month to month. And its industrial setting provided the backdrop for the occasional cultural event as well, such as 2013’s “Digital Den” interactive exhibit on computer history.

The institute months ago announced a feasibility study to “determine the viability of preserving the integrity of the historic architecture.”

The Cambridge Historical Commission’s 1971 “Survey of Architectural History in Cambridge” described the structure as:

The most distinctive Cambridgeport warehouse, as well as one of the oldest buildings in the vicinity of MIT., is the Metropolitan Storage Warehouse at Massachusetts Avenue and Vassar Street. Built in 1895, the five-story, 90-foot-wide brick building was extended in 1911 to a total length of 480 feet. Peabody and Stearns were the architects for both the original building and the extension. Although constructed of brick rather than a reinforced concrete, the warehouse is fireproof, because its ceiling and roof are brick-arched … Stylistically, the Metropolitan Warehouse evokes the solid, impregnable image of a medieval castle, with a prominent square corner tower, additional towerlike projections along both main facades, a crenellated corbelled cornice and small slit windows (round in the top story). It helped to set the style for such subsequent pre-MIT structures as Riverbank Court of 1900 Memorial Drive and the Armory of 1902 across Vassar Street. In terms of access, the warehouse lies directly alongside the Boston and Albany railroad tracks and has truck loading doors along Vassar Street, although the latter lack adequate provision for trucks to pull of the street. Off-street loading facilities were not so important in the horse-and-wagon era when the building was erected.