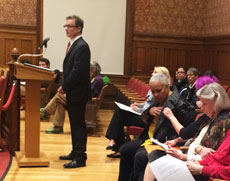 A change to zoning that would allow a medical marijuana dispensary near Harvard Square deserves examination, city councillors decided Monday, voting to send it on to their Ordinance Committee.

Not everyone was aboard – there was a lone voice of dissent during public comment and two councillors said they were “uncomfortable” with creating a medical marijuana district between Harvard and Central squares when there were already districts for such dispensaries in the Alewife and NorthPoint neighborhoods.

But even those objections seemed only to broaden the potential for medical marijuana sales in Cambridge, rather than continue limiting them to the two existing districts – where no dispensary has been able to open since their creation in 2013. Medical marijuana was legalized statewide in November 2012.

“What has become apparent to me and to many is that perhaps those guidelines need to be revisited, because they may have been too restrictive and made it extremely difficult – or nearly impossible – for a business to be situated in those sites,” councillor David Maher said. “This whole issue needs to go back to the [Community Development Department].”

“If we’re going to change the zoning,” councillor Craig Kelley said, “then we should just make a citywide overlay district.”

And the voice of opposition from the public, Central Square landlord and aspiring boutique hotel developer Patrick Barrett, repeated his objections to putting a dispensary near squares he considers overloaded with social services such as needle exchanges and homeless shelters while other parts of the city have none. “This is about equity,” Barrett said.

The business asking for the zoning change is Sage Cannabis, which seeks to sell medical marijuana from a below-ground space at 1001 Massachusetts Ave. in the Mid-Cambridge neighborhood. Chief executive Michael Dundas has argued that because the city’s Alewife and NorthPoint districts are the result of state Department of Public Health guidelines that no longer exist, its laws should change to reflect the change.

Originally dispensaries had to grow their own product, but that is no longer the case, and Sage would bring in its product from Milford. The state also intended for there to be only as many as 35 dispensaries statewide, portioned out by county and serving entire regions, but now there is officially no limit to the number of dispensaries, and they can serve smaller markets – decreasing the need to be near major roads such as Route 2 or Interstate 93, like the existing marijuana districts, and increasing the importance of being near mass transit stops such as the Harvard Square T stop.

Several speakers made clear the virtues of that change during public comment, including Nichole Snow, executive director at the pro-medical marijuana Massachusetts Patient Advocacy Alliance, a nonprofit based in Salem, who testified to patients being forced to travel “hours and hours” to get medically approved relief from the six dispensaries open in a 10,555-square-mile state: They are in Northampton, Ayer, Lowell, Brockton, Salem and, as of Feb. 6, the nearest-yet facility in Brookline. Brookline is about four miles away and 20 minutes’ drive. The shortest trip by public transportation takes about a half-hour once on a green line D train – available in Cambridge only at the Lechmere stop in East Cambridge or via red line transfer at the Park Street stop in Boston – and a bus trip, according to online mapping services. From the bus stop to the dispensary is a walk of a little less than a half-mile.

“It’s difficult to impossible to access medicine right now,” said resident Chandra L. Batra during public comment, explaining the combination of maladies she keeps in check with marijuana. “The thought of traveling more than three miles scares me beyond belief. And to know that right now we have patients who can’t get the medicine they need is really terrifying.”

Mike Crawford, a WEMF radio host and marijuana advocate known as Mike Cann, spoke immediately after Barrett, and addressed his concerns about whether a medical medical dispensary would contribute to the blight brought about by the massing of social services in Central Square. “I just shake my head,” said Crawford, who uses marijuana to alleviate pain from a 17-year-old spinal injury. “I just don’t understand how someone like myself who lives in the neighborhood, going to get my medicine in the neighborhood, is going to bring down the neighborhood … Mostly what this is about is giving access to people in Cambridge.”

The presence of the dispensary could help the “horrific” opioid crisis afflicting Cambridge and other communities, said marijuana activist Bill Downing, who traveled from his Reading home to speak to councillors. He cited widely reported data showing that in the 13 states that legalized medical marijuana between 1999 and 2010, allowing pain patients to use it to reduce pain instead of opiates such as Vicodin or Percocet, there were 25 percent fewer deaths from opioid overdoses annually.

Perhaps the strongest advocate for medical marijuana on the City Council is Marc McGovern, a social worker, and on Monday he said he was glad to see Sage’s petition move forward. “Any place you allow a doctor’s office or a dentist’s office, you should allow a medical marijuana dispensary, for that’s indeed what they are, medical facilities,” he said.

Sage looked in the medical marijuana districts and then in the areas just outside the districts, as a dispensary called Greeneway Wellness Foundation once tried, before finding the perfect retail-only site in Mid-Cambridge, said Sage attorney Sean Hope. That inspired the company’s request for zoning relief from the council – a step not pursued by the entrepreneurs referred to by Maher stymied by the rules, including one who hoped to open a dispensary in upper-floor space in a self-owned building in Harvard Square. Still, Maher said, he was “uncomfortable” paving the way for a single business after others had tried and been defeated by the existing zoning laws.

Councillors Dennis Carlone and Leland Cheung joined McGovern in arguing for rules about dispensary locations that worked citywide – such as keeping them a set distance from a place where children gather – rather than keeping the facilities in discrete districts. Either way, “Cambridge voted overwhelmingly in favor of approving medicinal marijuana,” Cheung said. “We need to keep this moving.”

“We’ve really failed the voters and we’ve failed the patients,” first-term councillor Jan Devereux said, calling it “an unfortunate occurrence that we made geographic zoning for one set of circumstances and they were changed at the state level.”

“Sage has really done its homework in identifying a location that will work for them, and I think this is time sensitive,” Devereux said. “If there’s any petition or set zoning that needs to be fast-tracked, it’s this one.”