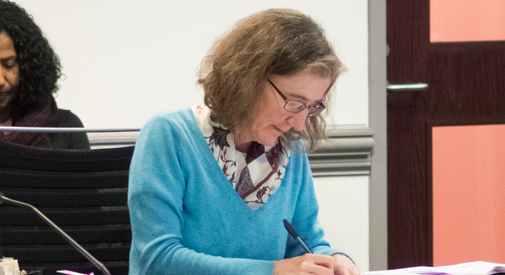 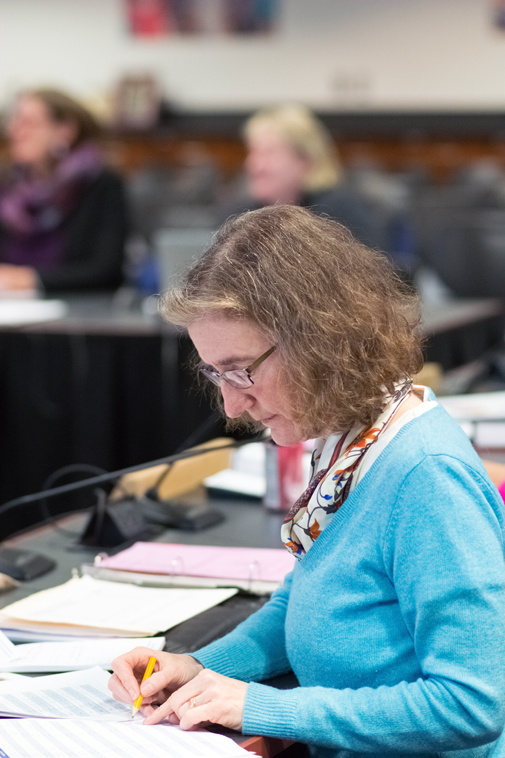 Calls for hard data showing the effectiveness of school district programs were repeated Tuesday by School Committee member Patty Nolan, and she was joined by other committee members. (Photo: Ceilidh Yurenka)

With a school budget draft due March 15, the School Committee met Tuesday for its first discussion of individual member’s budget priorities. Two public hearings and the crafting of overarching “budget guidelines” behind them, this was the first official opportunity to hear what is on the minds of members regarding funding – and achievement gaps and family engagement were among their top concerns.

“The good news is we are getting very close” to closing the remaining budget gap between the available resources and the projected $175 million cost of keeping the same level of services, Superintendent Jeffrey Young said. Without adding specifics about the size of the remaining gap, $3 million at the last meeting, Young said he was “quite confident that there will be no reductions that will have any impact on the schools, teaching and learning … I am looking forward to the March [17] meeting when we will talk about the programs,” referring to the budget subcommittee meeting at which the administration presents its proposed budget.

The nontelevised “retreat” was a round-robin format with each member giving their list of priorities they would like to see addressed. (Member Manikka Bowman was not present.) There were several requests for information on the impact of specific programs to help members evaluate which might be cut or strengthened. Member Patty Nolan repeated her Jan. 26 request for an analysis of current initiatives, similar to what administration provided January 2015 for last year’s budget cycle. After being told it would be included in the proposed budget, Nolan reiterated that it’s more useful to get that information before the “budget is proposed and on the table. It’s harder for us to know whether to continue certain things if we don’t know in advance.”

“That makes good sense,” acknowledged school district Chief Financial Officer Claire Spinner, who said that “we will take note of that” for future budgets.

Nolan also asked again about the co-teaching model used in some schools and sixth-grade math classes. Pointing out that a consultant’s analysis of Cambridge’s co-teaching was provided September 2014, she wondered, “Where are we at with co-teaching? We’ve had it in sixth-grade math for three years now. We should be at a place where we need either to expand it or to get rid of it.”

Prodded by budget subcommittee co-chairman Richard Harding for a response, Young said, “I think that’s something for us to think about. I’m interested in hearing in what Ms. Nolan thinks.”

Deputy Superintendent Carolyn Turk added that there would be “a brief document” forthcoming “about where [co-teaching] is happening in our district,” adding that it is “something for us to think about and engage in conversation.”

Although questions about analysis of program effectiveness has long been the bailiwick of Nolan, several other members joined in in asking for more information. Harding led his turn at the mic by asking “How are we evaluating programs?”

Vice chairman Fred Fantini asked for more information on the effectiveness of instructional coaching – assigning teachers to coach other teachers instead of students – and the Response to Intervention program that provides pinpointed supports to specific students, as well as other initiatives at the elementary schools. “When you bring more adults into the classroom it’s hard to see which program is having the impact,” he pointed out as other members nodded their heads.

Mayor E. Denise Simmons, who left to attend another event after her comments, said for at least the third time since becoming the committee chairwoman in January that she is “not getting a sense of where our family engagement dollars are going.”

For Simmons, community engagement is paramount, and she urged it to be looked at “through the lens of student achievement, and through race and class.” Whether it’s through family liaisons or some other entity, she favored student supports as a way of attacking the “opportunity gap.”

Acknowledging that some upper school principals have said they don’t see the need for family liaisons, Simmons insisted that the task of connecting families and students to the schools at all grade levels needs to be dramatically strengthened. At the high school level, she said, strengthening family engagement can be part of an approach to encouraging more students of color to move beyond the oddly named “college prep” classes – which are actually less challenging than the honors and Advanced Placement classes that many college-bound students take.

Simmons said she has been “stunned” by her encounters with promising students of color who “are not not getting the support and encouragement to take advanced classes. Here are kids losing an opportunity.”

The obvious racial differences between “college prep” classes and advanced classes at Cambridge Rindge and Latin High School has grown as a topic in committee meetings the past several months, and named as a major concern by nearly all the members. “For at least the last five budget cycles we have been talking about the … segregation in high school classes,” Harding said. “there is consensus that something has to be done. We hear it from students not in the classes; we hear it from students in those classes,” he said, gesturing toward student committee member Ben Austin, who has repeatedly raised concerns about “two separate schools” in CRLS. At the very least, Harding and Simmons want to see a name change for the “college prep” classes that does not mislead students and families into thinking these are high-level courses.

Member Emily Dexter worried that the achievement gap in elementary schools is worsening. The administration has touted improvement in standardized test performance by black students in grades three through five in the past three years, but Dexter said the more important data is not how this year’s third grade compared with last year’s, but how this year’s fourth-grader did compared with that same student in the third grade. Test “growth rates” show white students improving faster than any other group, she said, so despite improvement among black students, at this rate the achievement gap will only grow.

Dexter focused on “fully staffing” the Response to Intervention program used in the elementary schools – a labor-intensive effort that uses a one-on-one approach with struggling students to keep achievement gaps from creeping in but can pull the lead teacher out of the room repeatedly. Dexter cited Assistant Superintendent Jessica Huizenga as saying the program was not fully staffed. She also wants to tackle the achievement gap for low-income and nonwhite students by keeping ninth-grade classes small. “These are important transition years” and students need lots of support to get them well-acclimated and ready for the rest of high school, she said.

In the past two years, Cambridge’s ninth-grade enrollment was more than 120 students higher than the previous year’s eighth grade, and Nolan worried that staffing levels are not accommodating the increase. She and Austin shared some stories of students having to wait a semester or two to get into the appropriate math or foreign language class, for example, and parents reportedly expressed concern about adequate teaching levels at a recent curriculum night. At the elementary school level, a district “target” for maximum class size has moved to 22 from 18, Nolan said.

Spinner added that new class scheduling software is helping ease the problem, and that including “teacher reserves” in the budget allows for some last-minute staffing adjustments. She is also in conversations with CRLS Principal Damon Smith about his needs.

Looking at increasing pressures from more students with “intense needs,” budget subcommittee co-chairwoman Kathleen Kelly said the school system’s responsibilities and requirements to help had changed over the years, and she wants to ensure that there are adequate “staff who can intervene and recognize when students are in need of additional services.”

Most social work positions are “overloaded with the number of cases that they have,” Kelly said.

She wants all kindergarten through third-grade teachers to have adequate special education training, and advocates Assistant Superintendent Victoria Greer’s call for “universal design curriculum.” Others included a need for a “full plan around social-emotional learning,” with Fantini specifically supporting a “mindfulness” program advocated for in public hearings.

Other things in members’ lists included level-funding for out-of-school partner organizations; Kelly and Fantini want to see an expansion of the Kodaly music program. Several members commented on a long-stalled world language promise  – with Nolan asking for a real “plan” for language starting in kindergarten, and Dexter suggesting an immediate pilot program in one or two schools to get the ball rolling.