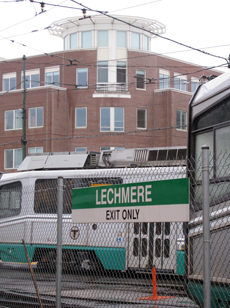 Despite a state vote Monday to keep the green line extension project alive and the knowledge Cambridge and Somerville could chip in an unprecedented $75 million to help make it happen, Cambridge City Manager Richard C. Rossi had a warning for residents and officials:

“This is no done deal. This is a very fragile situation,” Rossi said of the green line extension project. “We need to stay on this … If this gets pushed off now, it could never be built.”

In addition, “what I was told is that if this goes down, Lechmere Station won’t happen at all,” Rossi said at Monday’s meeting of the City Council, referring to improvements to the city’s only T stop on the green line.

Even if the extension project does happen, grand plans for Lechmere will be scuttled. The stop will become more of a simple shelter – similar to the Yawkey commuter rail stop by Fenway Park – and less of the showcase once envisaged. Trains will be boarded on a raised platform, allowing pedestrians and cars easier access to NorthPoint below at street level, and there will be an elevator, officials said. But they otherwise referred to the design as “skeletal” and “bare bones.”

“Lechmere was always meant to be a temporary station,” councillor Dennis Carlone said, referring to a ramshackle structure for trolleys and buses that has been in place since 1930. “I know you don’t want to hear this, but the station at the time was not a great station, [and] we’re getting a temporary station again.”

Previous developers of NorthPoint were committed to putting more money into a fancier Lechmere station, but the land has changed hands. The current developers, Divco, have committed primarily to improvements around the station, rather than for the station itself.

The sprawling light rail extension project took shape in 2009 as a $600 million to $1 billion project with seven stops in Somerville and Medford stretching to Route 16. It was to include a Tufts University stop and a spur to Somerville’s Union Square from Lechmere, which would move across Monsignor O’Brien Highway into the nascent NorthPoint neighborhood.

Cost overruns of up to $1 billion – putting the project over budget at $3 billion – forced the state Department of Transportation to consider cutting back or killing it, which would cost the state $996 million put into the project by the federal government. It would also raise legal issues, as the green line extension is mandated by a Conservation Law Foundation lawsuit.

On Monday afternoon, state transportation officials voted to keep pursuing the green line extension, including reallocating $152 million in federal funds meant for the final step of the extension at Route 16 to make sure the first phase of the project – the stations and stretches os rail closer to Boston – gets built.

They now must get approval from the Federal Transit Authority for the plan’s new, scaled-back form. If approval comes in the expected 18 months, construction would begin again in October 2017, said councillor Tim Toomey, also a state representative for the 26th Middlesex District, which includes Eastern portions of Somerville and Cambridge. Construction would take about three and a half years, leading to stations opening in the spring of 2020 on a project once expected to be complete last year.

Now Somerville is projected to put in $50 million to help close the funding gap, but its Board of Aldermen must approve the spending. In Cambridge, councillors agreed to send the city’s proposed $25 million contribution to their Transportation & Public Utilities committee, which is led by Toomey, to see if the political will was there to spend the money.

Although councillor Leland Cheung referred to the state as “holding us hostage” by threatening to kill the project and Lechmere, Cambridge officials seemed to express earnest support for Rossi’s proposal. “It’s a way for us to show we’re serious about this,” councillor David Maher said.

Working with the community 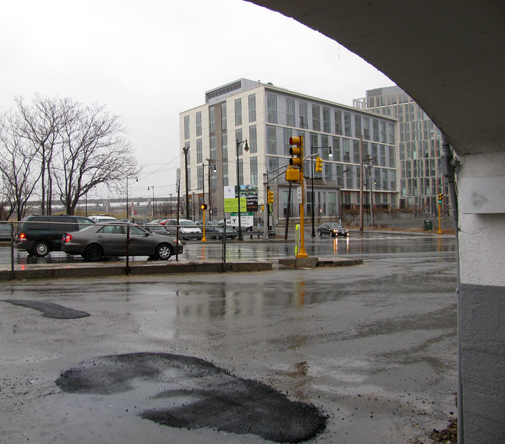 The NorthPoint development across Monsignor O’Brien Highway stands to inherit the Lechmere station.

Divco’s contribution is estimated to be about half of Cambridge’s proposed $25 million, and councillor Jan Devereux suggested the company might be pressured to contribute more – stepping up to bring the station back to a higher standards, for instance. Especially with Divco expected to make a potential $300 million profit by selling the One Kendall Square property it picked up in 2014, she said, “I don’t feel too badly about asking them to contribute.”

With the possibility Divco will bid to develop the 14-acre John A. Volpe National Transportation Systems Center land in the heart of Kendall Square, “I encourage you to negotiate from a position of strength,” she told Rossi. “I think NorthPoint really hangs in the balance.”

In addition, with redevelopment of East Cambridge’s empty courthouse tower and what will be made of the newly empty Lechmere Square parcels when the station moves means, “we’re going to need a really excellent station,” Devereux said.

It goes beyond that, Rossi said. Between NorthPoint, the courthouse and East Cambridge growth in general, some 3,000 units of housing (including some 200 units of affordable housing) are expected to come to the area in the next five years with some degree of reliance on the Lechmere station. And with Kendall Square real estate increasing in value and pricing out startup tech companies, a longer green line could be crucial in forming a regional innovation hub that extends into Somerville and Medford, creating economic development and taking cars off clogged streets.

Divco’s contribution started at half of Cambridge’s potential $25 million pledge, but the talks go on, Rossi said.

“They have contributed quite a bit so far and are still in the game to keep this alive. I think we have a rare developer there who really wants to make this a reality and work with the community,” Rossi said.